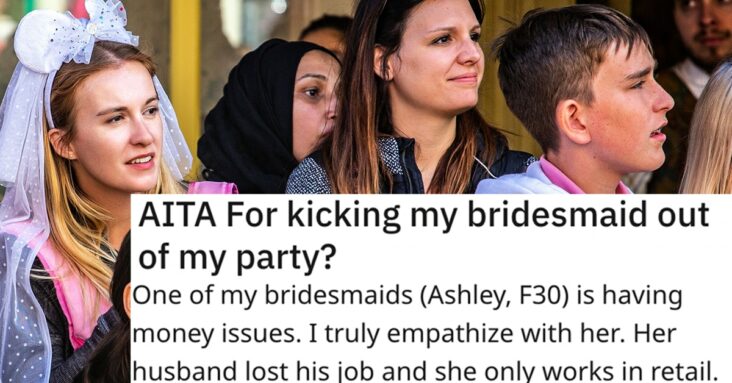 A bride-to-be turned to the infamous Am I The A**hole forum for judgment after kicking one of her bridesmaids out of her wedding entirely over a spat regarding tickets to Disneyland.

Going to the California theme park was part of her dream bachelorette party, she explained, and in trying to plan the trip and make reservations, she realized one of her bridesmaids, Ashley, still hadn’t purchased tickets.

“[Ashley] is having money issues,” she explained. “Her husband lost his job and she only works in retail. Since things are tight when I offered her the position of bridesmaid I told her that I’d be okay if she turned it down. I had no intention of changing my plans for one person. She insisted that it would be fine so I happily let her be a bridesmaid.”

It’s unclear if Ashley knew exactly what she was getting herself into, but after a price tag of around $350 for makeup, nails, and possibly an outfit for the bride’s big day, it seemed she ran into some trouble coming up with the money for the party itself.

When the bride asked whether she had bought her ticket for the park, Ashley allegedly “lost it.”

“Telling me it’s inexcusable for me to expect her to spend upwards of 1000 dollars on all the festivities when she can barely afford rent,” the bride wrote. “I told her she didn’t have to be a bridesmaid and she told me it’s ridiculous I expected her to sit out on the activities because she can’t afford them.”

Apparently Ashley thought the bride should have covered the cost of the park, and the bride responded by uninviting her to the wedding and blocking her number.

People have a wide variety of ideas regarding who should be financially responsible when it comes to wedding planning and all that it entails, but the way the bride handled the situation didn’t sit well with a lot of folks.

A later edit from the bride claimed that she had told Ashley she didn’t have to come to Disneyland at all and that Ashley responded by calling her “selfish, a b*tch, and [telling her that her] wedding wouldn’t last” all played a role in her kicking her out of the party.

This changed some people’s opinions about who was more in the wrong, while others questioned whether the bride was just trying to save face after getting told she had messed up.

At the end of the day, each couple has to decide what’s more important to them — throwing a fancy “dream” party and wedding, or spending that time with loved ones in anticipation of the big day. Some can manage to have it all, but understanding where your priorities are is bound to make it easier for everyone involved.