When Abby Jimenez’s husband took some Ex-Lax for stomach trouble, she didn’t think anything of it.

But, as she recounts in a viral Facebook post, her husband mistakenly ate 12 DOSES—in the form of an Ex-Lax chocolate bar.

“Then this morning, some sh—t started going down. Like, literally. He looked at the packaging and realized that when it said to eat 1-2 squares, it meant the tiny squares, not an entire block,” Jimenez wrote.

“So I’m calling Poison Control because he thought he was dying and I literally cannot stop laughing. I’m barely able to talk, I’m laughing so hard,” she added.

“They guy on the other end probably thought it was a prank call. I swear to God, I hope they record their calls and enjoy that one at the staff meeting later because even thinking about me trying to explain that my 39 year old husband just ate a whole brick of Ex-lax is making me wheeze.”

As if the experience wasn’t surreal enough, Jimenez explained that the Poison Control worker’s recommendations for treatment put her over the edge with laughter.

“The guy was like, ‘The biggest risks are cramping, dehydration, and diaper rash […] Oh boy. Oooooooh boy. You’ll need to get some Desitin.'”

Jimenez, who is a writer and Food Network champion, assured everyone that her husband was fine and also gave permission to share his sh—tty story. Her post received over 150k reactions and 71k comments.

“He said the level of diarrhea that hit him was so violent, he immediately knew something was wrong. He said he grabbed the box of Ex-Lax and read it like that scene in the movie Into the Wild when Chris McCandless realizes he’s eaten the wrong berries and he’s going to die,” Jimenez also said. 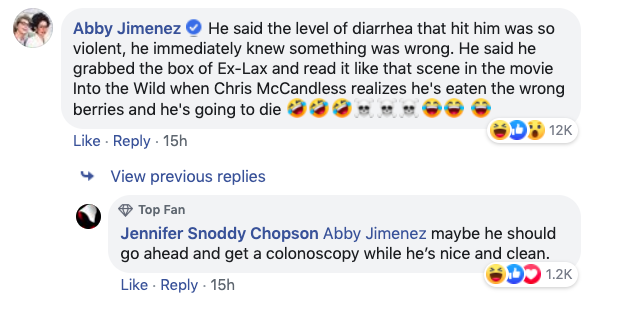 “Maybe he should go ahead and get a colonoscopy while he’s nice and clean,” a follower helpfully added.

The comments section transformed into a place for people to admit they used Ex-Lax to literally poison people they didn’t like, and I’m kind of shook at how casual it all is.

Maybe the moral of the story is that medication should not come in chocolate form. There should be no such thing as Ex-Lax chocolate! Or, please don’t poison your enemies with Ex-Lax?