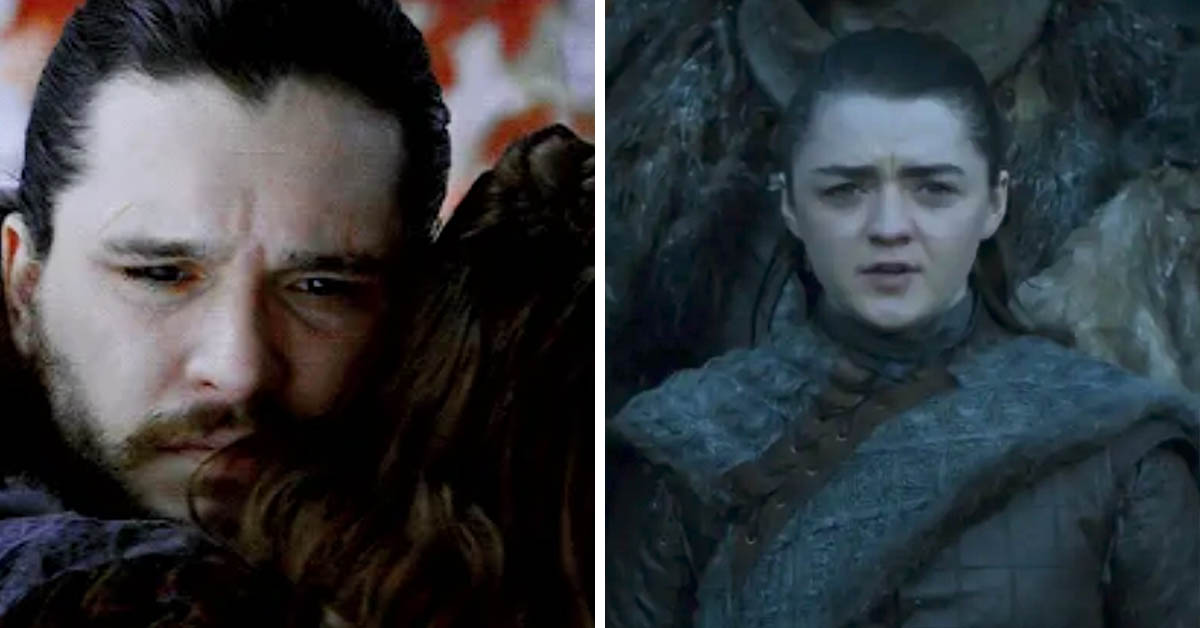 The season 8 premiere of Game of Thrones blessed us with several long-awaited reunions. First, we saw Jon Snow return to Winterfell and meet his brother Bran again. Not only did he reunite with Bran and Sansa back at home base, he also finally got to see his favorite little sister, Arya.

The two have always had a close relationship—Jon was the one who gifted Arya with her very first sword, Needle. Fans were happy and moved to see the two embrace each other again after so many seasons apart.

While the reunion was something we were all happy to see, there was a part of their embrace that was telling. During their conversation, Jon essentially called out their sister, Sansa, for being a bit difficult since his return to Winterfell with Daenerys by his side. Sansa is understandably reluctant to trust a Targaryen considering the families’ past history. Jon thinks, at first, that Arya will side with him as she did in the past—but he doesn’t realize how much she’s changed over the years.

Instead of taking Jon’s side and shaming Sansa, Arya responds by saying that Sansa’s “the smartest person she’s ever met.”

Jon responds by saying that “he’s part of the family, too.” But, Arya responds with a cryptic message: “Don’t forget that,” she warns Jon.

Arya’s not the little girl she once was. As fans know, she’s turned into a pretty smart and ruthless killer. The cryptic message is definitely coming from a place of love—but some say it foreshadows Jon Snow’s betrayal of his Stark family.

It wasn’t long after the conversation and reunion that Jon hopped on the back of a dragon with Daenerys. Just look at Arya’s face when she realizes it’s her brother on the back of that giant monster.

If you think about it, the Starks are much smarter than they’ve ever beenwhen it comes to protecting their family. Sansa and Arya had to go through the depths of hell just to make it back to Winterfell alive. Now that they finally have each other and their home back—they aren’t going to let anyone take it from them. Their parents lost their lives fighting to save their family name, and there’s no way that Arya and Sansa will let anything or anyone take Winterfell.

With Jon supporting a Targaryen, it leaves Sansa and Arya open and vulnerable. But now that Jon knows he is too a Targaryen—Sansa and Arya may write him off for good. It’s not that he’s a different person than they once knew, it’s just that he’s not Ned Stark’s son any longer, which may cause a huge rift between the siblings.

It seems like the cryptic message from Arya was letting fans know that Jon might forget his Stark roots this season.

Aside from the drama brewing with the Starks, Jon has some drama with another family member now knowing he’s a Targaryen. Sam tells Jon that Daenerys shouldn’t be the Queen, as Jon is the rightful heir to the Iron Throne. Jon points out that this is treason, but Sam retorts that it is merely the truth.

If Jon tells Dany that the Iron Throne is rightfully his—how do you except Dany is going to react?

Clearly, this season is shaping up to be a rough one for Jonny boy over here. Not only does he have to come to terms with her newfound identity, he also has to deal with his sisters “teaming up” against him.

Plus, he doesn’t even have Bran’s support or help, because he’s out here looking like…