We’re only one episode into the final season of Game of Thrones and already, fan theories about how the season will end are popping up left and right.

Between all of the reunions and realizations that happened in Episode 1, we’re pretty damn sure that the showrunners are setting us upto be blown away with deceit and betrayal.

After the first episode aired on HBO, fans began to wonder what was in store for Jon Snow and Daenerys, considering that Jon finally knows about his true identity and who his real parents are (cough, cough, not Ned Stark). 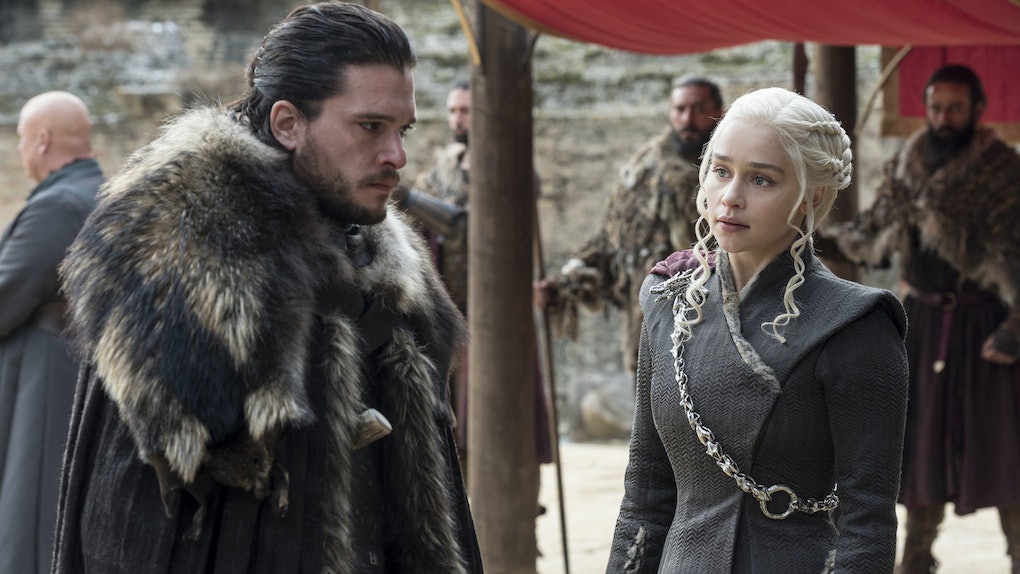 In a truly heartbreaking scene, Jon’s close friend Sam finds out that Daenerys killed not only his father but, also, his brother.

Sam, being the huge teddy bear and the most kind-hearted soul on Game of Thrones, excuses himself to cry. But, he immediately reacts out of anger and decides it’s time to tell Jon Snow that he’s not just a Stark, but also a Targaryen—and the rightful heir to the Iron Throne.

Jon is taken back by this information and is convinced that Sam’s got it all wrong. But Sam lets Jon know that he does have Stark blood in him—just not Ned Stark’s blood. Sam delves into the story of how Raegar Targaryen fell in love with Ned’s sister Lyanna, and how Robert Baratheon would have killed baby Jon Snow knowing he posed a threat to his claim to the throne.

While Jon doesn’t seem too enthusiastic about taking the Iron Throne in the first episode, going so far as to call it treason, there’s a very good chance that moving forward, he will take the throne in order to unite the Seven Kingdoms to fight the Army of the Dead. Or, he’ll try to claim the throne because it is rightfully his.

Jon never wanted to be king…ever. However, if the only way to unite the entire world to fight against the Night King is to claim the Iron Throne, Jon will do whatever it takes.

And yet we also know Daenerys believes the kingdom is rightfully hers. After the murder of her father and the loss of her brothers, Daenerys has traveled the entire world to get back to Westeros and try and save the Targaryen legacy and name. If she finds out that it’s Jon—not her—who is the rightful heir, there’s a pretty good chance that the two will brawl out for the seat.

Fans believe the only true way that Daenerys will step aside and let Jon claim the throne is, well, over her dead body. Therefore, many fans are wondering if Jon will be the one this season to kill Daenerys—despite their little love affair.

People on Twitter are already predicting that Jon will do the dirty deed this season.

Jon gonna have to kill Daenerys. You heard it here first

Jon will kill Daenerys and that's that.

Jon’s gonna kill Daenerys in the end mark my words

Jon or Arya is going to kill Daenerys. I called it.

If Jon does kill Daenerys—does that mean he’ll adopt her dragons and become the father of dragons? Doesn’t quite have the same ring to it, sorry.