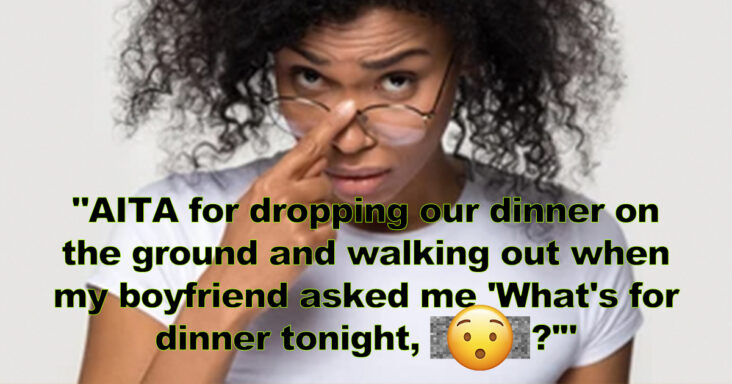 TikTok is an app filled with hilarious videos, comments, and trends. The platform can truly bring people together no matter how far apart they may actually be. Some trends however, can split people apart faster than they can say “What’s for dinner tonight, b*tch?”

A recent Reddit post brought to light a very risky trend being performed by Andrew Tate wannabes (not a compliment) in which they call their female partner “b*tch” after they’ve made them dinner. So funny! Read the story in context below and prepare yourself for an epic comeback.

An unamused OP asked: “AITA for dropping our dinner on the ground and walking out when my boyfriend asked me ‘What’s for dinner tonight, b*tch?'”

I was over my boyfriend’s apartment this weekend and I was cooking dinner because he was studying for exams. I made pasta and a chunky sauce with meatballs and veggies. I told him dinner was ready and he goes “what’s for dinner tonight, B*TCH” … With like a lot of emphasis on the last word.

I was fed up, I’d had a pretty rough day with work and I have some awfully bad associations with that word being used by other people in my life who were pretty abusive. So I was so irritated that I dropped the pot of pasta sauce I’d been carrying right on the ground and was like “Well nothing’s for dinner tonight now. And I better not hear you using that word again, it’s for the girls.”

He was freaking out about how sauce had landed on his rug and he even said “you’re seriously acting like a bitch right now, I dunno what else to call it.”

I just walked out and got takeout for myself and went to my friends house. She thought it was funny but my boyfriend was furious, he kept texting and calling and sending me voice memos trying to explain that saying “what’s for dinner tonight b*tch” was a TikTok trend…. And that he was just quoting something as a joke to put on tiktok.

Below is the “trend” he was referring to, made popular over a year ago.

I thought that was the shittiest excuse ever, it doesn’t matter if he saw it as a joke, or stole the “joke”, it was still disrespectful.

But it didn’t change the fact he thought that shit was funny, to demean me when I was trying to do him a favor. Like hell I came over when he was studying to make a home cooked dinner and he decides it’s time for jokes? So I put my phone on don’t disturb for the night and split a bottle of wine with my friend and her roommate.

The next morning he was sending me angry texts demanding I clean his rug because he was too busy with exams to do it. I was shocked he left it overnight, that’s disgusting. I texted him back saying.

“Yeah so that’s the btch tax honey 🙂 leave me alone till you’re ready to handle your own cooking and cleaning because this btch isn’t anymore. Also it’s vile you left that soaking in all night.”

He called me and told me that he was okay with doing his own household work, but I did throw a full pot of sauce at the ground so that’s on me to clean up.

I told him “yeah no I’m not comfortable doing chores for you if you see me like your b*tch.”

He told me he didn’t and it was just a “trend” and I got pissed off he was playing that “TikTok trend” BS excuse again and I told him “Well I’m starting a trend called ‘saucing’ where as a little joke people throw pasta sauce around! You can’t be mad because it’s just a little trend, a little jokey joke, just a little prank bro!”

AITA for how I reacted when my boyfriend asked me “what’s for dinner tonight, b*tch?”

OP then added an edit to address a comment she’d gotten a lot:

“But did you tell him not to call you a bitch? Like how would he know otherwise?”

Honestly if someone has gotten to the age of 30 and not realized that women (as a whole) do not like having demeaning slurs used against them… They’re beyond my help. This isn’t something that needs to be told. I shouldn’t have to go through life like “Hey man just in case you were thinking I might like demeaning slurs against my gender used on me, I don’t actually. :)”

And if you were about to comment something like that, let me just tell you in no uncertain terms… WOMEN DO NOT LIKE BEING CALLED BITCHES BY MEN. DO NOT CALL WOMEN BITCHES. IF YOU NEEDED TO BE TOLD THAT IS UNKIND, CONSIDER YOURSELF OFFICIALLY TOLD. NOW YOU HAVE NO EXCUSE TO NOT “UNDERSTAND.”

Redditors easily deemed OP as “Not The A-hole” and had a few things to say about her ballsy boyfriend. Check out the gossip below: