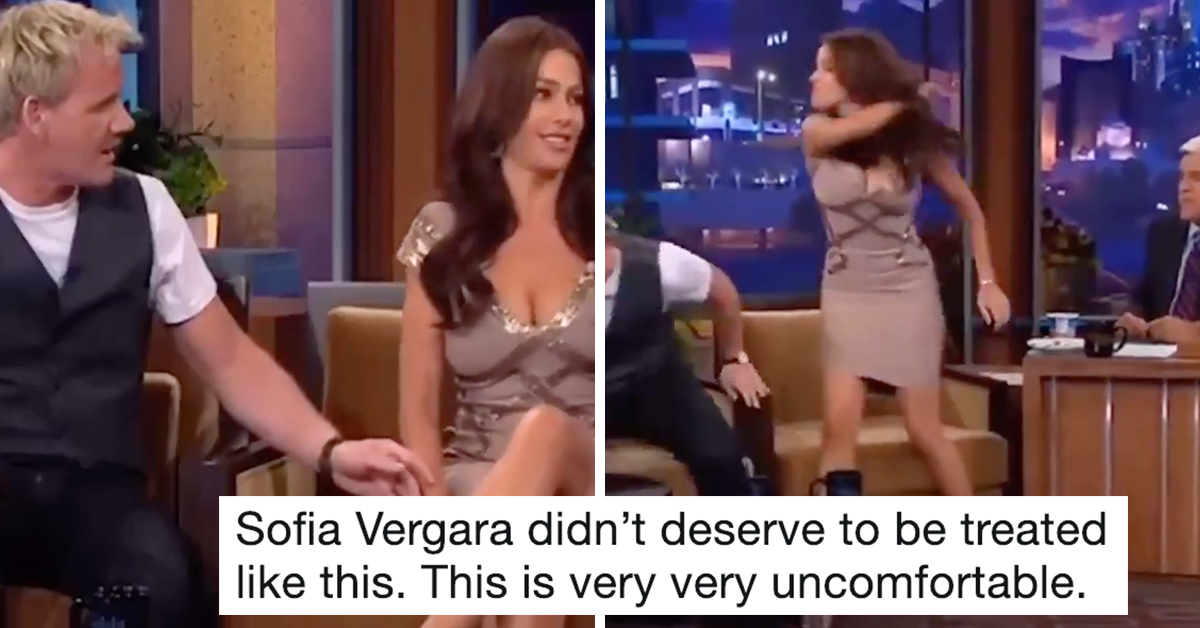 Gordon Ramsay is catching serious heat this week after a video clip from 2010 resurfaced, in which he and fellow guest Sofia Vergara give interviews on The Tonight Show with Jay Leno.

At one point in the video, Vergara asks the men, “Did I scare you guys?,” referencing her loud scream in the previous skit. “I never scream like that in real life. It was all acting,” to which Ramsay responds, “only in the bedroom?” as he touches her arm. She is clearly uncomfortable as she leans away from Ramsay’s hand.

Leno then shows pictures of the Modern Family star in a bikini vacationing in Greece and Italy. In one shot, the actress is eating a slice of pizza, prompting Ramsay to say, “You seem like you’re enjoying that. You had a whole wedge in your mouth at one time?”

Sofia Vergara didn’t deserve to be treated like this. This is very very uncomfortable. pic.twitter.com/5xgxLLFZ8R

Vergara becomes noticeably irritated, but Ramsay forges onward, asking “You haven’t heard of a knife and fork? You don’t eat pizza with a knife and a fork,” before saying, “You just pick it up and stick it in.”

The celebrity chef also insults a Colombian dessert Vergara brought to the show, exclaiming that it tasted like “s**t fudge.” This is par for the course when it comes to Ramsay, though repeatedly touching Vergara—and one point hitting her on the side of the thigh—is not.

“No touching!” she yells at him. She also appears to yell “ese tipo no respeta,” which translates to “this guy does not respect me.”

As the clip above began to go viral, more and more people added their thoughts to the conversation.

Casual banter? She was almost melding with the far side of the chair.

She straight up yelled “this guy does not respect me!” In Spanish. Her body language is more than indicative of her uncomfortableness towards his presence.

She says "Don't touch me". You continued. No grey area here. Mr. Ramsey.

I used to really like Ramsay. I wanted to become him. But it turns out… pic.twitter.com/Dp5TIiJnIn

What an absolute creep. Vergara looks like she's being as assertive as she can in the circumstances, and he's taking fucking liberties pic.twitter.com/gRJMFMPHq3

Gordon Ramsey’s actions can be described the same way he describes food: pic.twitter.com/f1xP4wYD8w

I don’t know their relationship and level of friendship, but I’m glad Sofia Vergara didn’t take his shit! She deserved to be treated better! pic.twitter.com/NF079b5uoA

@GordonRamsay you treated Sofia Vergara with utter disrespect. You sexually harassed her to the point where you actually touched her. She was making her disdain for you obvious. What the fuck is wrong with you? Never watching anything you do again.

i recently made a post on my finsta about gordon ramsay's work before seeing his disrespect and general slimy behavior towards sofia vergara. no longer a fan

I feel physically sick! What an embarrassment. Shame on you @GordonRamsay

Sofia Vergara should have smacked @GordonRamsay's face & had him charged with sexual harassment & sexual assault. What an entitled, toxic, chauvinist. Did Jay Leno say ANYTHING to him about this? pic.twitter.com/JC0t78QkW6

Ewwww ramsay! I wonder how he would react if men did the same thing he did to his daughters… pic.twitter.com/j6W9JcLEaW