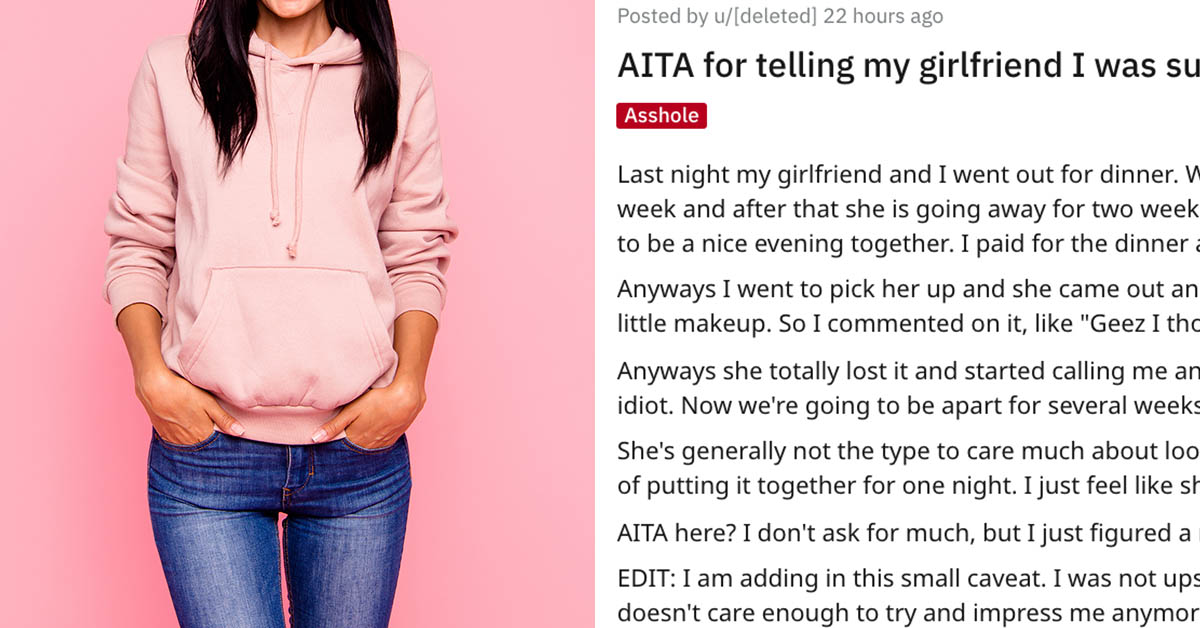 Recently, a Reddit user started a controversial thread in the ever-entertaining “Am I The Asshole?” asking if he was wrong for telling his girlfriend that she wasn’t dressed “nice enough” for their dinner date.

He prefaced the situation by saying that the couple went to a decent steak restaurant because they would be spending some time apart in the upcoming weeks.

Last night my girlfriend and I went out for dinner. We went to a decent steak restaurant. I am going out of town for a week and after that she is going away for two weeks so we won’t see each other for awhile. So the intention was for this to be a nice evening together. I paid for the dinner and it was my idea, if that is relevant.

When the guy picked his girlfriend up, he claimed she “didn’t care at all,” wearing jeans, a hoodie, and “maybe a little makeup.”

Anyways I went to pick her up and she came out and she looked… like she didn’t care at all. Jeans and a hoodie, maybe a little makeup. So I commented on it, like “Geez I thought you might want to get done-up a little bit tonight.”

Clearly, his girlfriend didn’t have the nicest response to his criticism. The two got into a huge fight—just before they would be spending a few weeks apart.

Anyways she totally lost it and started calling me an asshole and telling me I ruined the evening and made her feel like an idiot. Now we’re going to be apart for several weeks, so obviously not the best way to leave things.

She’s generally not the type to care much about looking great, but she is a good-looking girl and she is more than capable of putting it together for one night. I just feel like she takes me for granted and doesn’t care anymore.

So, he asked the Internet if “he’s the asshole” for criticizing heroutfit and choice of attire for their romantic night out.

AITA here? I don’t ask for much, but I just figured a night like that would justify a little effort.

People online felt pretty damn strong about the way in which he handled himself and approached his girlfriend.

YTA for the way you said it. You could have made it fun, like “hey honey let’s get dressed up all fancy for dinner tonight!” Instead you insulted her. –QueenMoogle

If you had expectations about her attire, you should have communicated that. “Hey, I’m looking forward to dinner! I was thinking maybe we should dress up a bit, really make a night of it!” The way you expressed your disappointment with her appearance was rude AF. Apologize. –brijaytee

Maybe she thought she looked nice or maybe she wasn’t really feeling well. There were so many better ways to approach this that I’m shocked that you’re surprised by her reaction. –artorianscribe

Way to make it about you. You didn’t even ask her how her day was, if she was feeling well, or anything. You just automatically jump to her outfit level HAS to do with YOU. Dude…no. –WonderTwinkles

After seeing some of the responses, the guy came back to shove his foot even further into his mouth:

I am adding in this small caveat. I was not upset that she didn’t look good, it is more that it just seems like she doesn’t care enough to try and impress me anymore. Anyways it seems like the verdict is already coming in loud and clear, and I am the asshole. Lol oops.

And, then again, saying:

Well I accept the fact that I am the asshole for saying something. But I am 100% not accepting of the idea that I should just accept my girlfriend no matter what. I expect the best of myself and no less than that from my partner. I will discuss this with her and if the relationship doesn’t survive, then so be it. I deserve better.

People online thought he was so much of an asshole, he was banned from the thread and banned from responding to people’s comments.

So, it’s safe to say that yes, this guy is a fucking asshole.