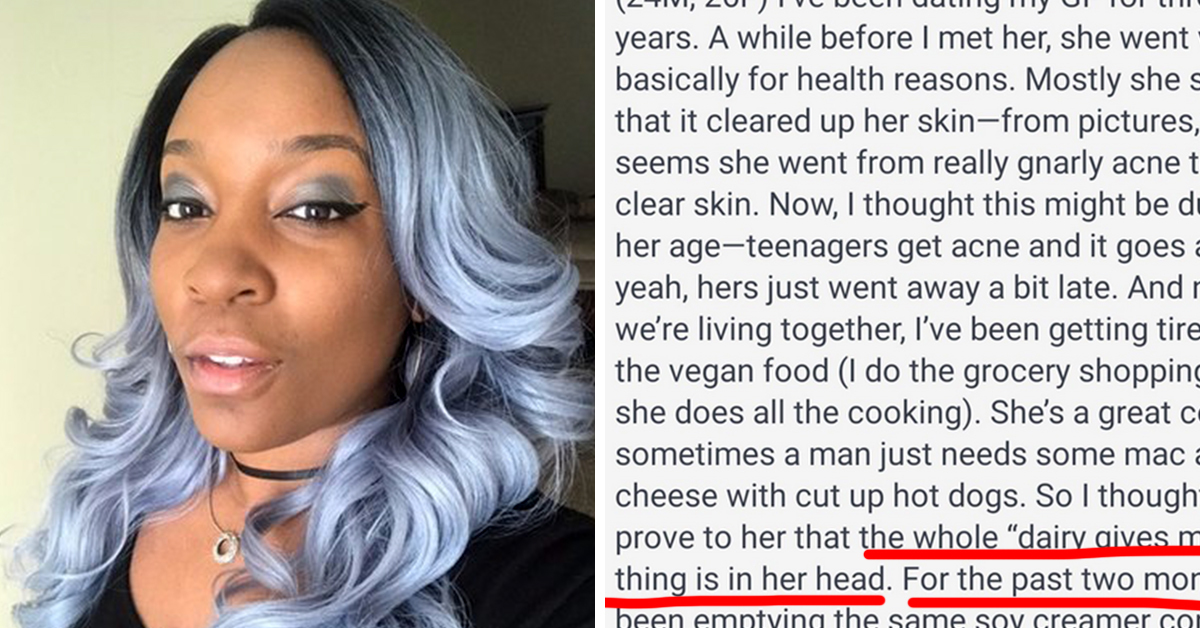 Dating requires plenty of trust. Whether you’ve been seeing someone for a couple weeks or a couple years, you’d like to think that your chosen partner has your back in all things. While I’m sure a good many of us have felt or been betrayed by past exes, it’s never gone so far for me that I lose trust in people entirely.

One man on Reddit confessed that he purposefully sabotaged his girlfriend’s vegan diet and skincare routine.

Men are absolutely horrifying creatures. I pray this sister sees this and flees. Immediately. pic.twitter.com/H9xWmasf78

Here’s the quote in full:

(24M, 26F) I’ve been dating my GF for three years. A while before I met her, she went vegan basically for health reasons. Mostly she swears that it cleared up her skin—from pictures, it seems she went from really gnarly acne to very clear skin. Now, I thought this might be due to her age—teenagers get acne and it goes away yeah, hers just went away a bit late.

And now that we’re living together, I’ve been getting tired of all the vegan food (I do the grocery shopping but she does all the cooking). She’s a great cook but sometimes a man just needs some mac and cheese with cut up hot dogs. So I thought I would prove to her that the whole ‘dairy gives me acne’ thing is in her head.

For the past two months, I’ve been emptying the same soy creamer container and filling it with dairy creamer. I was gonna do a big reveal, like “Surprise! You can eat whatever you want!” But she’s been wearing makeup both in and out of the house lately…and last night I saw her barefaced for the first time in a while and it is BAD. Like insects about to hatch out of her face bad.

So I figure I’ll just quietly throw out the dairy and her skin will go back to normal… I feel bad but on the other hand, I was doing it for her own good!

This is textbook gas-lighting, where one person in the relationship changes the other’s reality without them knowing. In this case, his girlfriend is now confused why she’s breaking out when, as far as she knows, she’s been sticking to her vegan diet that prevents that from happening. If he continues with his plan on just switching her creamer back to soy and never confessing what he did, she’ll still be just as confused and maybe make further alterations that aren’t necessary in the slightest.

She needs to leave him.

Folks on Twitter were quick to condemn his actions and point out more egregious flaws in his character.

He went out of his way to devise this awful plan. Making Mac n cheese with hot dogs is on every level easier than doing what he did. Abusive, manipulative, disrespectful, and frankly, dangerous. Messing with someone’s diet without their knowledge can cause awful results.

Hell, he wanted to control her. And it was more important for him to be right than honest.

also the fact that HE DAMAGED HER SKIN then has the nerve to talk about how gross he thinks it is?!?! I WANT TO PUT BUGS ALL OVER HIM

This is the behavior of an actual sociopath. I hope she finds out soon because this is disturbing