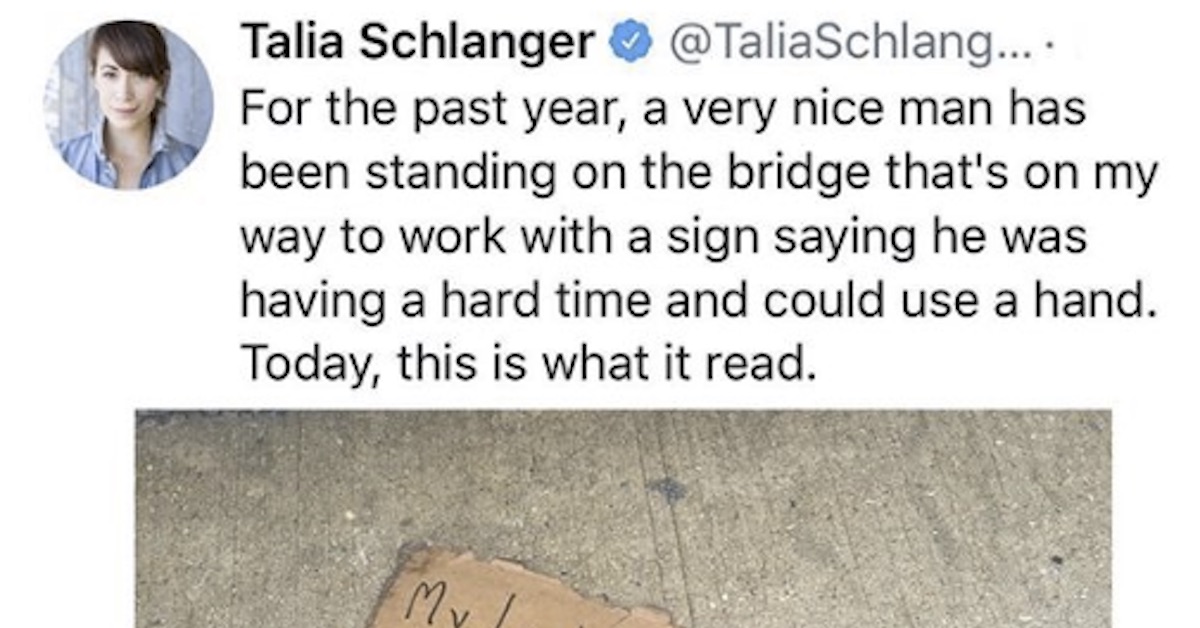 Most of us are so lucky that we’ll never know how hard it is to have to stand in the street and ask strangers for help. But there are so many people who have to do just that, for so many different reasons. They’ve fallen on hard times or lost their job or even their homes, and now they have to rely on the kindness of people they don’t even know.

Talia Schlanger, the host of “World Cafe” on NPR, shared a tweet about a man she’d see asking for help on the street who one day wasn’t at the spot where she usually saw him. She tweeted the circumstances: “For the past year, a very nice man has been standing on the bridge that’s on my way to work with a sign saying he was having a hard time and could use a hand. Today, this is what it read.” And she included a picture of a cardboard sign written in marker that said, “My last week out here I got a job thank you to everyone who has helped during this hard time.”

For the past year, a very nice man has been standing on the bridge that's on my way to work with a sign saying he was having a hard time and could use a hand. Today, this is what it read. pic.twitter.com/EIX6STCiDE

How nice is it that the man left a thank you note? The sign served not only as a way to show appreciation but also as an explanation to anyone who might have gotten used to seeing him and possibly chatting with him and would be worried that he just suddenly disappeared.

Schlanger followed up the tweet with more information. She wrote that he got hired by a man in New Jersey to build cabinets and was given a place to stay during the job by the same man.

He got hired to build cabinets by a man in Jersey who also has a place for him to live while he works. I congratulated him and he said “You have no idea how hard it is to get out of this situation once you’re in it”.

I don’t have any idea. But I’m very glad that there’s some sunshine for him on this rainy Philly day, and I’m thankful to him for creating the most beautiful moment of my year so far.

I do enjoy a happy ending like this! Restores my faith in humanity.

That’s fantastic. Thanks for sharing.

I don’t even know him but I’m so happy and proud of him! Good for him! pic.twitter.com/2gHJcHcmJX

Nice to know there’s still good in the world.

Wow! I read the first few words with some worry. All power to him and thanks to you for sharing.

If you encounter him again tell him, please, that at least one person you relayed his story to is pulling for him 1000%. Nice turn of events.

This is just incredible. Wow. Love it so much

One person asked if she knew the name of the company that hired him, saying they deserved extra customers.

I wish I had asked before saying goodbye. If I see him again tomorrow morning I will most certainly find out.

And a whole lot of comments!

It’s nice to see some good news to counter all the bad.