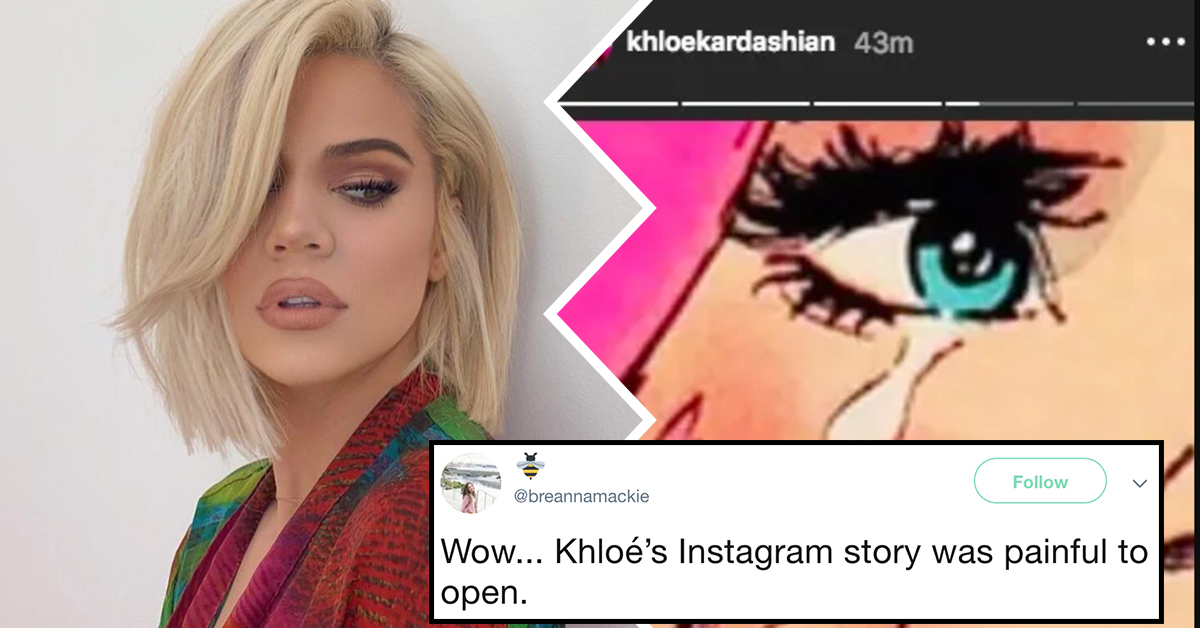 Khloé Kardashian has finally broken her social media silence after reports surfaced this week that her boyfriend and baby daddy, Tristan Thompson, cheated on her (again) with a close family friend. On Tuesday, outlets reported that Thompson was seen making out and snuggling with family friend, Jordyn Woods, at a party. Additionally, reports surfaced that Woods stayed at Thompson’s home until 7 A.M. the next day.

Since the story broke online, multiple people in the Kardashian/Jenner circle have made comments online, basically confirming the reports to be true. Additionally, sources close to the family have stated that Thompson admitted to Khloé that he did hook up with Woods after she confronted him, and, that Kylie Jenner has since asked Woods to move out of her home, where she was living with Kylie and her daughter, Stormi.

Fans online have been following the drama, looking to see who has unfollowed who and waiting for people to make a statement on the issue. So far, Khloé’s best friend Malika has unfollowed both Thompson and Woods, and, Khloé’s sister Kim Kardashian has done the same.

Now, on Thursday, Khloé broke her silence through her Instagram stories by posting some cryptic and heartbroken quotes and images for fans and followers to see. The four images are incredibly telling to the situation she is currently in.

The first image is a quote that says, “the worst pain is gettin hurt by a person you explained your pain to,” which, clearly is directed at Jordyn Woods. It’s no secret that Woods has been close with the Kardashian and Jenner family for years—she’s even appeared in early seasons of Keeping Up with the Kardashians alongside a young, teenage Kylie Jenner. It’s probably true that she’s been around when Khloé had spoken about her relationship and situation with Thompson, so, seeing that she betrayed her like that—hurts.

The second quote showcases that Khloé is trying to look at the betrayal—both from Thompson and Woods—as a blessing. She now knows that Thompson cannot be trusted, even after she was kind enough to give him a second chance. And, she knows that she’s not only helping herself, but the rest of the Kardashian and Jenner family (especially Kylie) by exposing Woods’ true colors.

The third quote really tugs at the heartstrings, as a direct message to Thompson. She’s basically saying that she loved Thompson with honesty, truth, and patience, but Thompson continued to dog her and break her heart. This one hurts.

The last image Khloé posted on her story was of a woman crying—one that looks like a cartoon version of KoKo herself (nails and all).

People on Twitter were feeling for Khloé in her time of need and despair, feeling as though they wanted to nothing else but help her and send her positive vibes during this hurtful time in her life.

Came across this on Khloe’s Instagram, and I really feel for her. No woman should have to go through something like this. I hope you find what you’re looking for; I’m rooting for you!! Wishing you nothing but the best. Your fans love you!!! ❤️❤️❤️ @khloekardashian pic.twitter.com/r1I0nCSKGK

Khloe Kardashian found the most spot-on Instagram quote ever for her situation. Yikes. pic.twitter.com/nSA2rle9TA

Khloe's Instagram story 😭 I hope she is really done this time pic.twitter.com/iHmOF3AUva

In all honesty, I feel for Khloé. Sure, it’s hard to be surprised that Thompson cheated on her again after she had already been cheated on by him with multiple girls (on camera), but, to be betrayed by someone who has been apart of your circle and your family for years—it hurts twice as hard.

Girl, we are feeling for you.