Depression is one of the most common mental disorders among young adults in the U.S. today. One out of five adolescents has had a serious mental disorder, like anxiety or depression, at some point in their lives. A recent report shows diagnoses of major depression are up 33 percent from what they were in 2013.

Being depressed is not just being sad or in a bad mood for a day. What’s known as a major depressive episode is a period of at least two weeks during which the person is in a near continuous low mood.

Symptoms can include things like low self-esteem, a loss of interest in things that used to be fun, lack of energy and concentration, and poor sleep.

But depression can also be hard to recognize because it’s different for each person. Likewise, not all folks dealing with it respond to the same treatments.

You rarely see what depression actually looks like, unless you’re living with or are close with someone who suffers from it. People don’t often take and post pictures of themselves looking miserable and basically hating life; they’re much more likely to snap a selfie and post it when they’re feeling cute and happy. But depression really can affect your appearance and the photos below serve as proof.

Quenlin Blackwell is a very well-known YouTuber who got famous on Vine when she was just 12 years old. (You may also recognize her from memes and reaction gifs.) She has a huge following of over a million people on Twitter, where she’s been very open discussing her struggles with depression, anxiety, and more recently, an eating disorder which she’s overcome.

On Tuesday, the 18-year-old tweeted two side-by-side photographs that went viral. The picture on the left shows a completely bereft-looking Blackwell, while the one on the right shows her looking gorgeous, practically glowing, sipping on a Starbucks drink.

The accompanying caption read, “a mental health glo up. I’m so proud of myself dude. I literally LOOK healthier.” 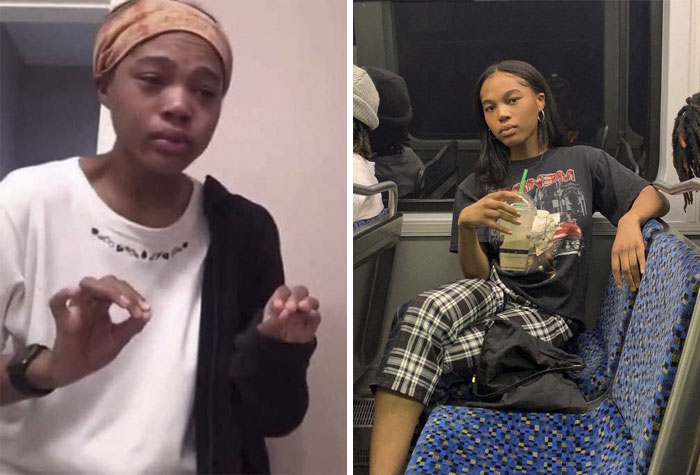 When people are open about their struggles, it can inspire other people to open up. And sharing pictures, actual photographic evidence of the misery of depression, can help destigmatize the disorder. 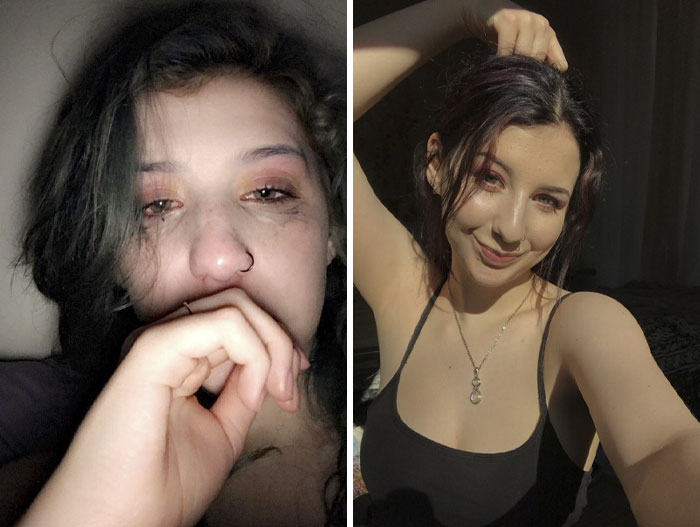 Soon people were tweeting their own mental health glow-ups. 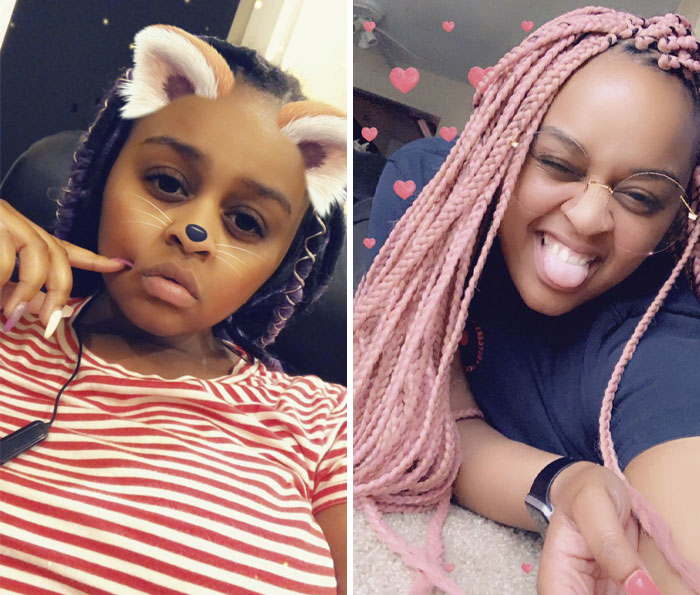 One woman wrote along with her pictures, “literally mental health affects your appearance so much I can’t even believe I used to look like that.” 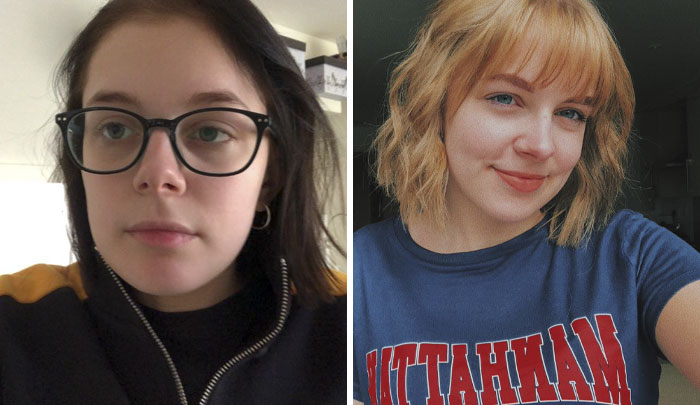 Another woman included two shots a world apart. Although she wasn’t wearing makeup in either, they look like they could be different people. 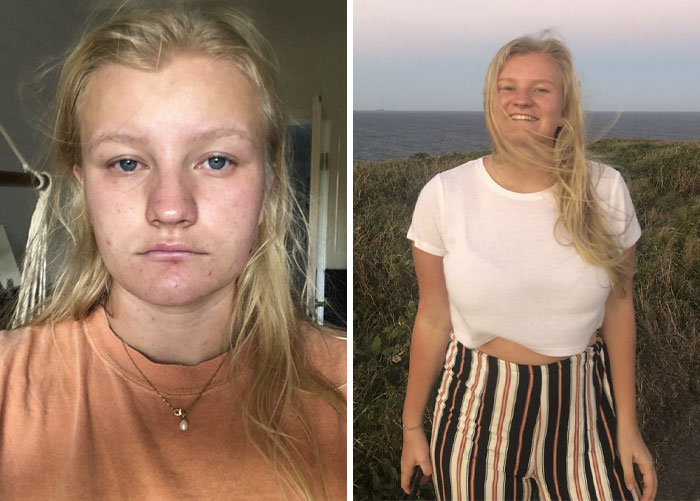 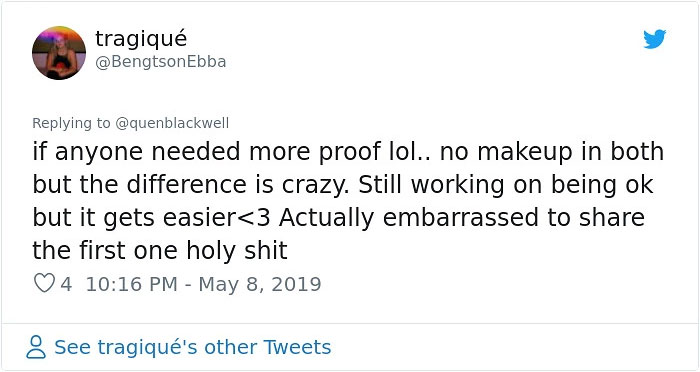 As one woman wrote, “every day can be a battle,” but as her picture shows, healing is possible. 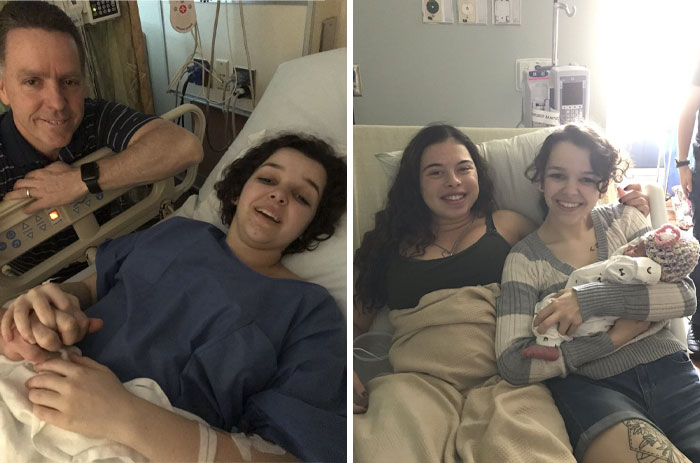 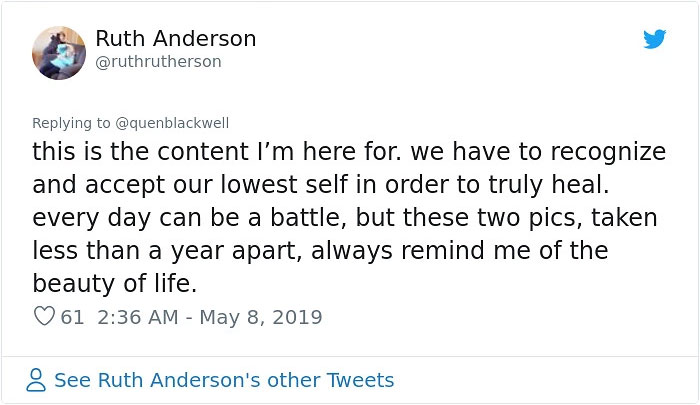 Depression might be a part of life for some people—people who’ve had one episode of major depressive disorder are at high risk of having another. But understanding the disorder and taking care of yourself is crucial.

Same!!! So proud of you and everyone in the comments showing their progress❤️ pic.twitter.com/rtesZstqUj

And the interesting thing, it’s not just people who look better when they’re not depressed. Sometimes, it’s rooms, too. Like the one below, in the “before” shot. 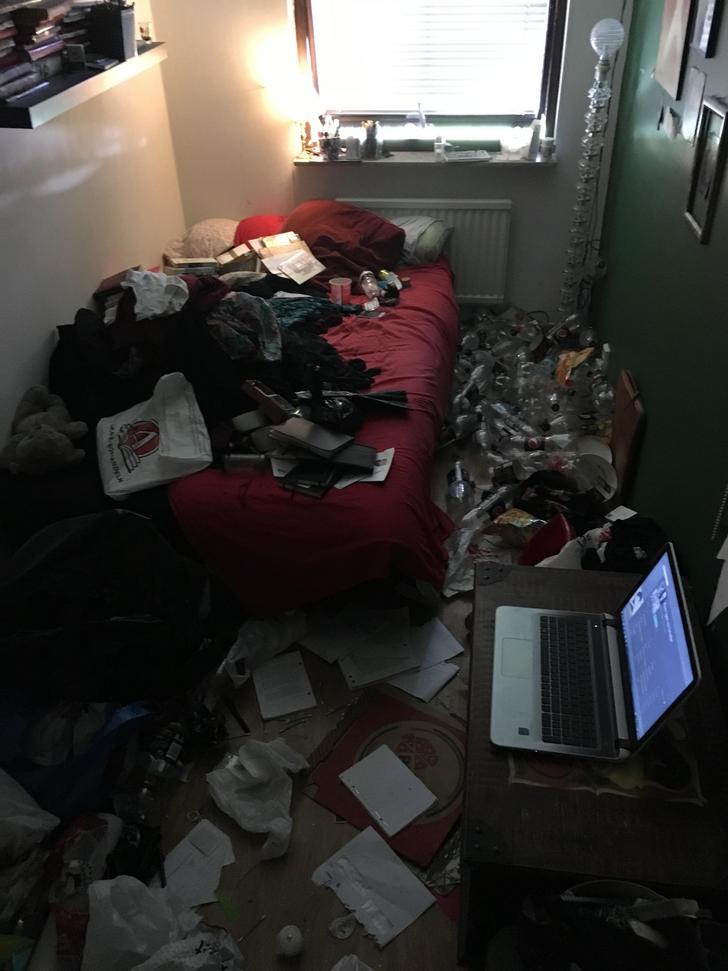 Of the first picture of the room, the user wrote,

My room.
I suffer from severe depression and have a really hard time with cleaning and doing other kinds of household work. My room have been this messy for several months beacause i cant push myself to take care of it. But this friday i decided to finally do it!

The second picture shows the room looking clean, organized, and cozy, a complete 180 from the unwelcoming mess that was there before. 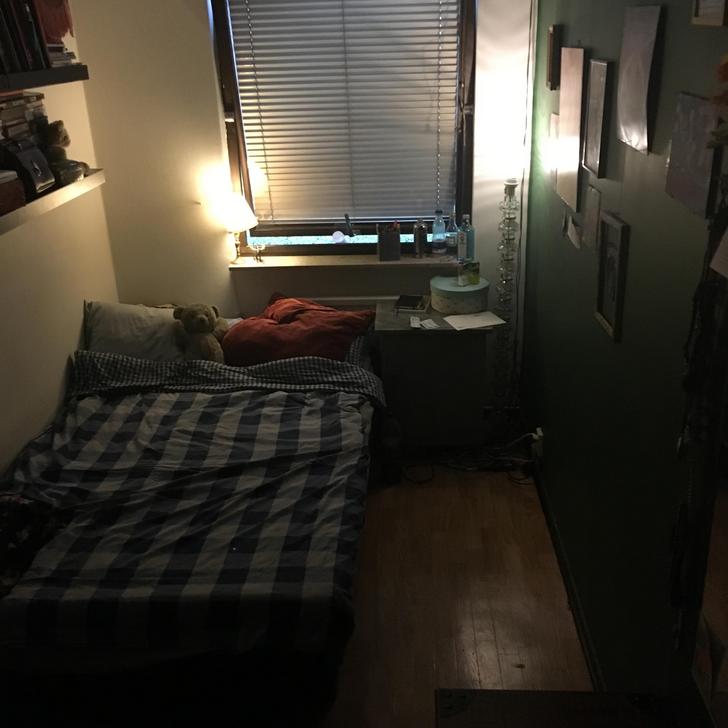 Three days later…
You can finally see that i have a floor! Say hi to my teddy Nalle on the bed!
I know its not a big victory, but for me it means the world to just be able to have my door open if people come over.
I feel so at peace right now, just wanted to share with all of you wonderful imgurians!
Me 1 – Depression 0!

So you can see how depression really does affect so many aspects of private life, even if they’re not always visible to everyone.

People responded to Blackwell’s tweet, proud of her and thrilled that she was feeling better.

Proof that loving yourself really does hit different

so proud of you. love you SO MUCH!

Genuinely so happy to see you doing better. You deserve it Quen.

A few people shared their own stories.

I’m crying because I totally relate. Mental health drains and takes away so much from you. Life becomes so much more beautiful when depression and anxiety does haven’t a hold on you.

And people cheered for the thread, full of positivity.

the positivity of this post and the replies,,, i needed that

The important thing is to make sure you have support. Asking for help is in no way a weakness.

You will be ok. You will get through this. You have people who love you.

If you or someone you know is suffering from depression or any mental health disorder, please, please, please know that help is available. You can call the National Suicide Prevention Hotline at 1-800-273-8255 any time of day, any day of the week. Be good to yourself.