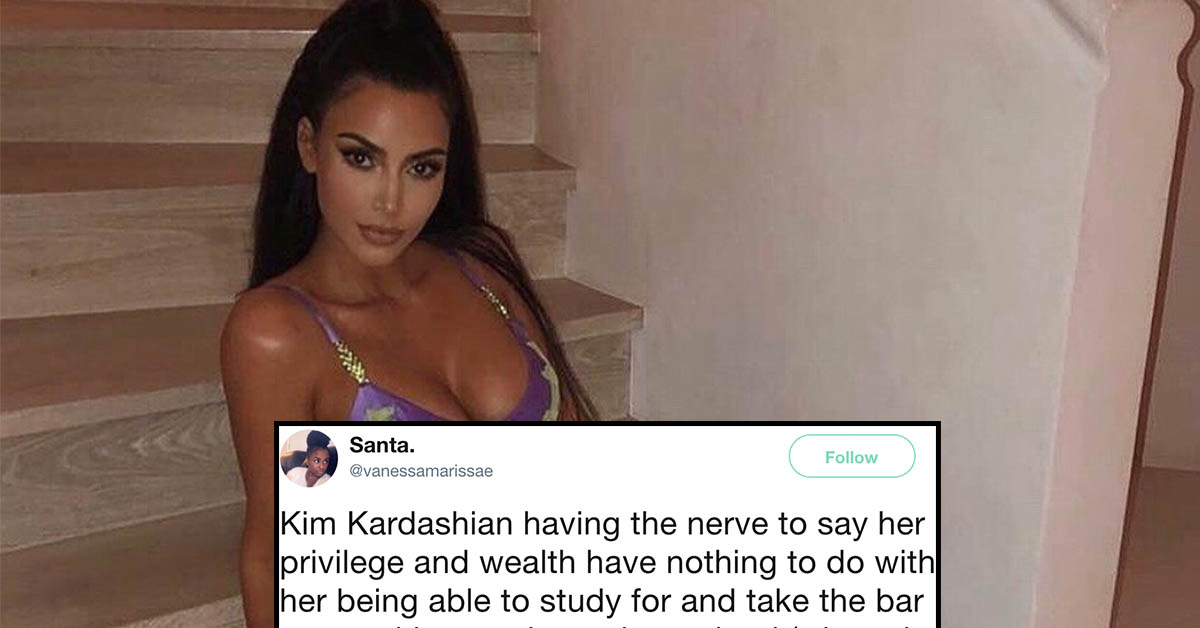 Recently, Kim Kardashian opened up in the latest issue of Vogue about her brand new endeavor in her life—no, it’s not another sex tape or another makeup line. The Keeping up with the Kardashian starlet announced she was studying to take the bar exam to become a lawyer.

I’ve dreamed of this moment for so long, many said it would never come. Words cannot begin to express how much of an honor it is to have my first solo US cover of @VogueMagazine. pic.twitter.com/gwiXrdQY3k

The mother of three (soon to be four!) said that studying for the exam has been one of the most difficult tasks she’s taken on. She claims that it takes her much longer to get through all of the readings, but she understands and conceptualizes the theories and the skills.

Many people online thought it was hilarious that a Kardashian was studying to become a lawyer—despite the fact that Kim’s father, Robert Kardashian, was a lawyer himself.

After receiving a plethora of hate online and dozens of people telling Kim to “stay in her lane,” the reality TV star shared a photo online with a lengthy caption, writing:

Last year I registered with the California State Bar to study law. For the next 4 years, a minimum of 18 hours a week is required, I will take written and multiple choice tests monthly. As my first year is almost coming to an end I am preparing for the baby bar, a mini version of the bar, which is required when studying law this way. I’ve seen some comments from people who are saying it’s my privilege or my money that got me here, but that’s not the case.

One person actually said I should “stay in my lane.” I want people to understand that there is nothing that should limit your pursuit of your dreams, and the accomplishment of new goals. You can create your own lanes, just as I am. The state bar doesn’t care who you are. This option is available to anyone who’s state allows it. It’s true I did not finish college. You need 60 college credits (I had 75) to take part in “reading the law”, which is an in office law school being apprenticed by lawyers. For anyone assuming this is the easy way out, it’s not. My weekends are spent away from my kids while I read and study. I work all day, put my kids to bed and spendmy nights studying.

There are times I feel overwhelmed and when I feel like I can’t do it but I get the pep talks I need from the people around me supporting me. I changed my number last year and disconnected from everyone because I have made this strict commitment to follow a dream of mine – It’s never too late to follow your dreams.

I want to thank Van Jones for believing in me and introducing me to Jessica Jackson. Jessica along with Erin Haney have taken on the role of my mentors and I am forever grateful to them both putting in so much time with me, believing in me and supporting me through this journey. This week I have a big torts essay due on negligence. Wish me luck!

Many people online immediately pointed out that the only reason Kim Kardashian is able to take the bar, study, and even qualify for a law degree is because of her privilege and her money. It’s not every day that a mother of three children can find the time to complete a law degree—especially with such young children.

While some fans supported her decision to follow her dreams and career choice, many were bothered by her caption’s denial that she was only able to do so thanks to her privilege and wealth.

absolutely here for you following your dreams but acknowledge your privilege @KimKardashian. You have nannies, babysitters, chefs, drivers that make studying in addition to being a mom much easier for you than the average mother. https://t.co/9Y5RuXXqQE

Kim Kardashian denying that her privilege and money is what’s going to make becoming a lawyer, easier for her is why I can never take her or the rest of that family seriously.

Kim Kardashian really sat there and typed a whole essay just to say her money and privilege didn’t play a factor in her being able to take the bar without finishing college or going to law school pic.twitter.com/6cZ4LKZrE5

This is something I’m very heated about all the time. If Kim kardashian wants to be a lawyer good for her but her dumb Instagram caption bothers me because she’s so in her own bubble that she refuses to recognize her privilege and wealth helping her successes and endeavors

White Privilege is Kim Kardashian thinking she can become a lawyer without going to college or law school.

The LEAST you could do is acknowledge that you do in fact have privilege. Random individuals do not get private tutoring from multiple power house attorneys for four years. Are you blatantly ignoring this fact, or truly so naive it didn’t cross your mind? pic.twitter.com/RwNzM0eqmB

Kim Kardashian has yet to respond to the comments on social media.