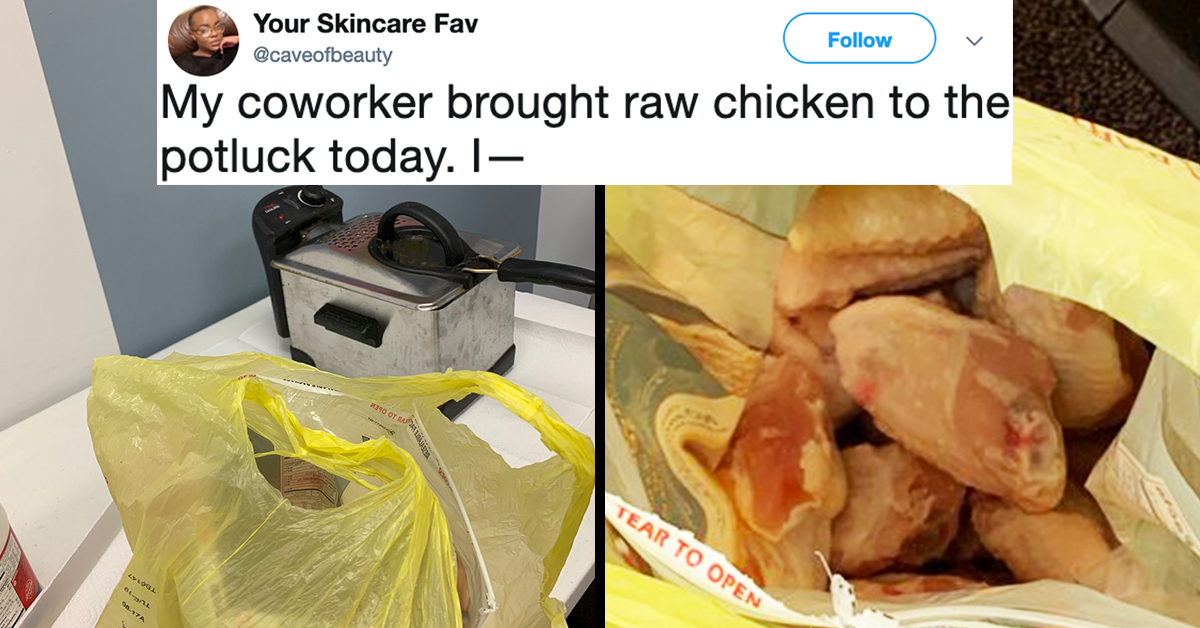 Office potlucks can really tell you a lot about people. What sorts of food people bring, how(/if!) they season it, whether or not they follow potluck etiquette—these are all reflections on who they are as human beings.

So when Lily (@caveofbeauty) shared a photo of what her coworker brought to the office potluck (A BAG OF RAW CHICKEN)—and then proceeded to live-tweet the aftermath, BOY did it sure feel like we got some lessons in human nature, but also in office politics and food safety, all at once! What a treat.

“My coworker brought raw chicken to the potluck today,” she wrote. “I—”

My coworker brought raw chicken to the potluck today. I—

And yes, yes he is. pic.twitter.com/F8mGLtljep

She then tweeted an update: The dude brought his own deep fryer but apparently does not believe in spices, explaining that “putting the sauces on them after” IS the seasoning.

<pdir=”ltr” lang=”en”>Here’s an update. He brought a deep fryer too. There are no spices in sight. He’s putting *bare* chicken in the fryer and putting the sauces on them after. And yes he said that’s the seasoning. pic.twitter.com/0iI5b7UjfN

The next tweet is a video, captioned: “he’s touching [the chicken] with his bare hands too. Pls send help.”

“This has gone entirely too far,” Lily wrote. “SOMEONE CALL THE POLICE.”

This has gone entirely too far. First he had salmonella brewing in the air with the open bag of raw chicken.

Now he’s touching it with his bare hands. SOMEONE CALL THE POLICE. pic.twitter.com/GdpfdbVeUn

He is going to JAIL. pic.twitter.com/CZLCEbxOZT

The updates grew more and more concerning. Lily revealed that the offender proceeded to touch everything around him with his raw-chicken hands, and even BIT INTO A RAW ONE to see if it was cooked.

This is what meat thermometers are for, people.

“He keeps offering me the salmonella,” Lily wrote, adding that she had no choice but to keep shoving pizza slices in her mouth despite it not being a part of her diet.

It seemed to never end.

This is still continuing btw. He brought 2 full bags of wings. pic.twitter.com/f3X4H2ZAUq

The coworker who had gotten sick legitimately had to leave the office for the rest of the day.

Yeah…what nightmares are made of, and what would be a fireable offense in any food establishment.

Your coworkers later on tonight. pic.twitter.com/rVmTmwyF1k

From now on he’s only to bring drinks and plates

Did ANYBODY ask why?? pic.twitter.com/eQzcT9OoHI

Everybody in the office rn: pic.twitter.com/h4U4s6YvQZ

If you got nauseous, you weren’t the only one.

This thread made me sweat. https://t.co/52B5KLquC8

This is the most upsetting potluck-related thread I think I have ever read https://t.co/cJG302Ti1S

This thread is the most horrifying thing I have read all week https://t.co/MEGZIbiyXz

Authorities should have been notified.

We wish Lily the best of luck on her job search.