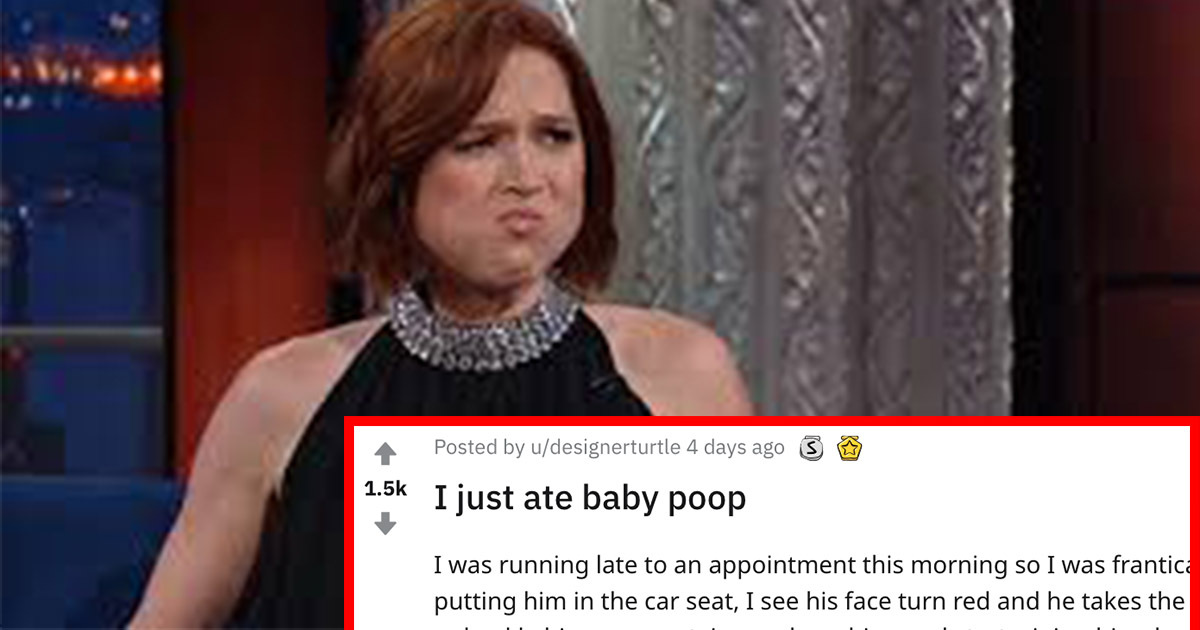 When it comes to being a mom, shit happens—figuratively and literally.

Reddit mom u/designerturtle recently shared a disgusting, yet believable story of the literal variety and it went from routine diaper change to “ho-lee-shit” real quick.

I was running late to an appointment this morning so I was franticallytrying to get bag packed and baby ready. As I’m putting him in the car seat, I see his face turn red and he takes the biggest, loudest poop I’ve ever heard. I quickly unbuckle him, run upstairs, undress him, and start wiping him down. I take the first wipe and clean off a mountain of poop, trying to get as much off as I can. Now, the wipes we use don’t separate very well when you pull them out. So when I’m in a rush and only have one hand free, I rip them apart with my teeth to separate them. I think you can see where this is going.

In one hand I have the wipe drenched in poop, and in the other hand I have the two clean wipes stuck together that I just pulled out. In my rushed, panicked, sleep deprived state, I shove the shit-covered wipe in my mouth and bite down. Poop fills my mouth. I stood there for probably way too long because I couldn’t even believe what I just did. I spit the wipe out and started cleaning my mouth out with the clean wipes. I moved my still-poopy baby to the crib for a second while I ran to the washroom to gag and rinse with all the mouthwash we own. When I came back to finish cleaning up, my baby looked at me and just gave the biggest, gummiest smile possible. He probably thought it was a fun game we were playing or something.

No one warns you about some of the nasty stuff you’ll go through in parenthood! I’m letting SO deal with all diaper changes for the rest of today :’)

While I’m sitting here gagging on my own breath, it turns out there are a lot more people out there who have tasted their own children’s poop than I would have liked to know about. Comments from other parents who have taken a bite out of their children’s turds began towrite in—sharing what they taste like, and what they smell like. Brace yourself if you have a weak stomach.

Dude. I’ve accidentally ate baby poop too. It tasted like clay. Somehow, a little nugget escaped my son’s diaper and ended up on my plate of eggs and sausage. It looked like a fucking piece of sausage! Into my mouth it goes. Something is wrong. It dawns on me. I spit it out and brush my teeth a hundred times.

Another mom said she ate it, thinking it was from a bath bomb.

I’ve been there. A couple weeks ago I put my little girl in a bath and tried a new kind of bath bomb (from Crayola- it changes the color of the bath). There were allthese little particles floating in the water that I thought were from the bath bomb (because they had been turned blue). My girl put a particle in her mouth and started crying. I, for some dumb reason, tried it too to see if it was that bad. That is when I realized that it was NOT from the bath bomb… they were poop particles. Floating everywhere. All over her and her bath toys.

One mom even said she didn’t quite eat poop, but her kid “projectile vomited” into her mouth.

When our oldest was about 3, he came into our room in the middle of the night and woke me up to say that he was sick to his stomach. I picked him up to set him on the bed, and he projectile vomited right into my mouth. Not the way I wanted to be woken up…

But, there was one conversation on this Reddit thread that went the extra mile that seriously, even I was cringing over. Reddit user PermanentDaylight had to just ask the question:

Ok, juvenile as it is, I have to ask. Does it taste like it smells?

And, then, after sharing that she thought her son’s poop tasted “sweet,” a plethora of parents began describing their children’s own poop as “smelling like popcorn.”

I always thought breast milk poop smelled like stale, buttered popcorn. Did not confirm with taste test though.

Yes!!! Everyone thinks I’m crazy when I say this, but it definitely does!!!!!

Before my very eyes, mom’s everywhere were vividly describing their children’s poop via my favorite foods—which means I’m completely off buttery popcorn and cheddar cheese.

My son’s was a mix of buttered popcorn and parmesan cheese. It honestly didn’t smell bad at all. But my daughter releases the hounds of hell with every poop and has hadgarbage butt since day one.

I thought my oldest smelled like mild cheddar cheese. Couldn’t eat that sliced for a while.

My sister changed my 7-month-old’s diaper and said it smelled like bad sour cream. I can’t un-smell it now.

Excuse me while I die.