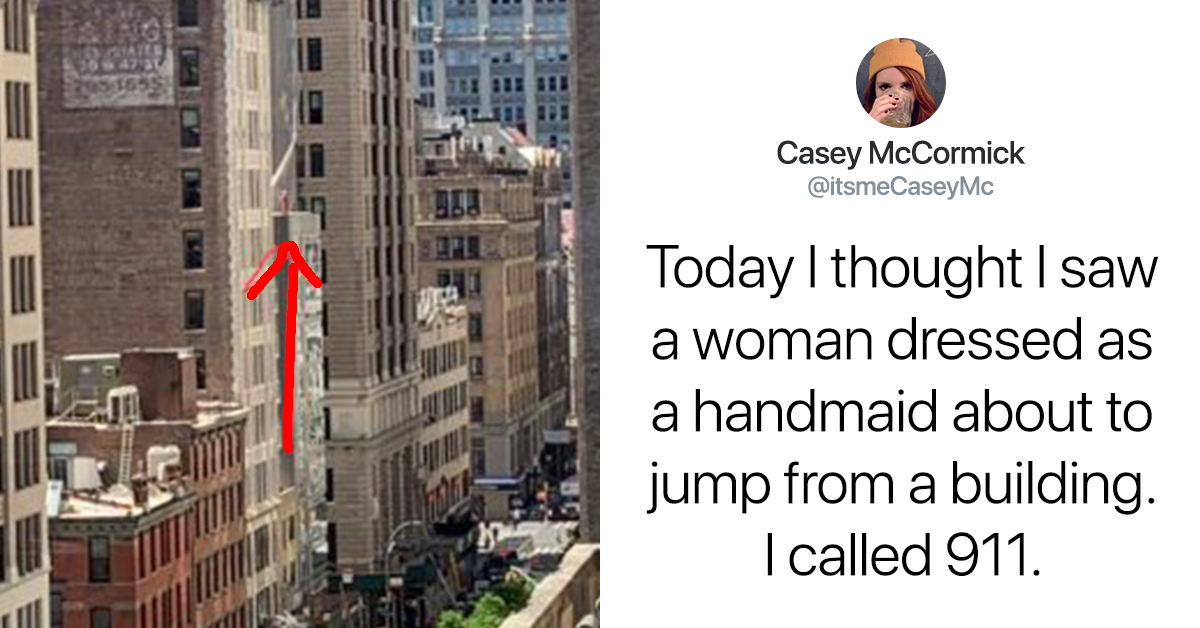 Let’s face it: With the rash of anti-abortion legislation sweeping the nation, things are starting to feel downright dystopian.

If you’re a fan of Hulu’s adaptation of Margaret Atwood’s classic novel, The Handmaid’s Tale, you may have recently found yourself wondering if we aren’t a few state laws away from becoming the Republic of Gilead.

So New York-based comedian and creative strategist Casey McCormick was especially alarmed when she looked out her office window on Tuesday morning and saw what looked like a handmaid, preparing to jump from a very high building.

McCormick explained to the Daily Dot, “[A]s I scanned the usual skyline, something bright red blowing in the wind caught my eye. It looked like a woman in a Handmaid’s Tale robe and bonnet, standing on the ledge of a building.

The wind made it look particularly like a person swaying.” 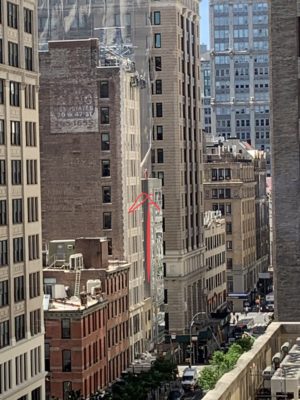 McCormick couldn’t believe her eyes, so she called over her colleagues who quickly agreed that the figure appeared to be a person. “We couldn’t figure out what it could be other than a person, so we began to get more nervous,” said McCormick. “We decided it was better to be safe than sorry and to do something. So I called the police.”

McCormick phoned 911 and remained in close contact with the authorities throughout the morning. When they finally arrived on the scene, they texted McCormick a photo of the “handmaid” in question.

McCormick couldn’t believe it. “I about died… I was so relieved it was not a person in danger, but I also felt so hilariously dumb. I just cried from laughing so hard, and because it finally felt like the tension was over.”

McCormick shared the story on Twitter where it has earned nearly 300,000 likes.

Today I thought I saw a woman dressed as a handmaid about to jump from a building. I called 911. pic.twitter.com/EIrz6wR0bz

Reflecting on the incident, McCormick said recent anti-abortion legislation definitely played a part in her alarm. “I do think [the political climate] had an impact on my perception… I knew there were a lot of anti-ban rallies happening around the city yesterday, and the handmaid’s outfit often appears at protests surrounding women’s rights.”

But fortunately for McCormick and her coworkers, this incident had a much happier ending than any episode of The Handmaid’s Tale, especially those where the handmaids encounter state law enforcement. Said McCormick, “The police and EMT officers who responded were very fast, very professional, and ultimately, very kind when they found out it was a false alarm.”

For more information about suicide prevention or to speak with someone confidentially, contact the National Suicide Prevention Lifeline (U.S.) or Samaritans (U.K.).