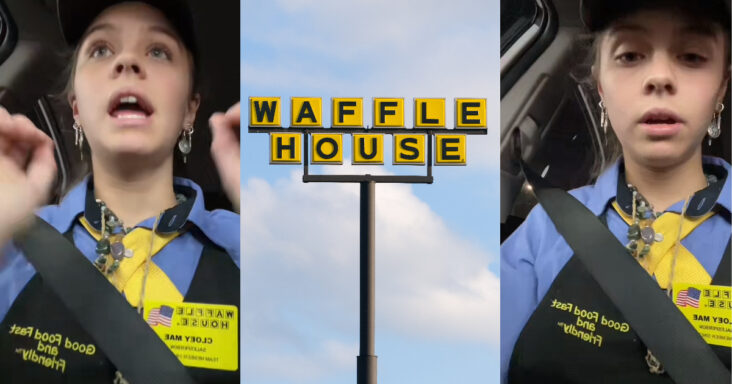 The practice of tipping varies from country to country, but in the US, it’s expected. Especially at a restaurant.

But sometimes people get stiffed. That happened to Waffle House employee Cloey May (@she_soul_suite) who went off on the thoughtless customers in a video that later went viral.

According to Mae, a group of “kids” walked into the restaurant at 8:57 pm, just three minutes before her shift ended.

It sounds like Mae was ready to go home, but her replacement was still in their car, so Mae ended up serving the group.

Two more ended up joining, and they had all kinds of demands like wanting only plastic silverware.

Mae was a pro, though, and said she “nicely served them.” It sounds like she was going the extra mile, too; she said she was “bussing the table,” and giving them “refills galore.”

Even then, Mae thanked them (with more than a little sarcasm), before they left.

Then she furiously recounted the tale in her car. As she put it, “F*ck them kids.”

The commenters were all engraged on her behalf.

If you’re wondering, it’s pretty standard to tip between 15-20 percent at sit-down restaurants.

And most people say they tip restaurant workers more than 20 percent,  according to a survey by restaurant technology company Popmenu.

Etiquette expert Lizzie Post told CNBC that “the baseline is 15% for basic service, but if you have any extra cash or you feel inspired, go for it and tip more.”

And below that can be insulting, she said.

“If you left me a 5% tip when I was a server, I would have assumed you were a jerk or not familiar with our tipping customs, unless there was something noticeably bad, like I spilled a drink on you.”

Here’s the video, judge for yourself.