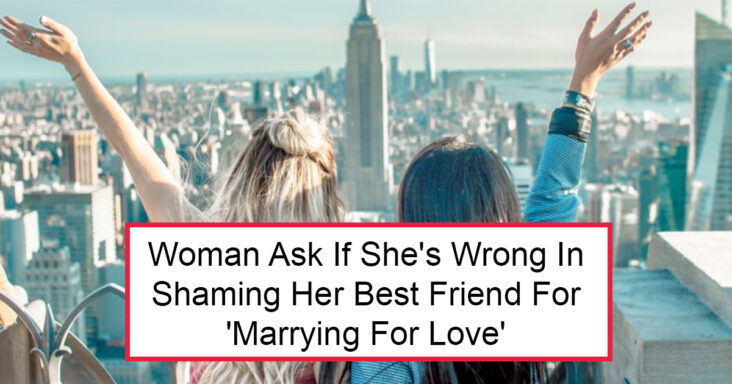 Sometimes our friends need a reality check. The rose-colored glasses can be hard to peel off and when our friends are obviously in need of an intervention, it feels like our duty to at least attempt to warn them. But attempting to shame your best friend about being with her financially troubled fiance, who happens to treat her exceptionally well, is not how friends act.

In a recent Reddit post, u/AdQueasy3077 asked if she was wrong for doing just this, and her best friend/bride-to-be’s response was understandably ungrateful for the “advice.” Read our original poster’s (OP) story below, as well as the top comments.

She asks: “AITA for calling my best friend dumb for “marrying for love”?

I (27f) am in a very stable relationship with my fiancée (29f) for around 4 years and we are planning to get engaged eventually and then marry.

My best friend Chrissy (fake name and also 27f) has been with her own fiancé since they were 20. They only got engaged this year and it was kinda weird how it took him so long to propose since he seemed to be financially stable and all. Throughout the years I asked Chrissy why her fiancé hadn’t proposed yet and she kept insisting it was not the right time but she’d never say the reason why, just that it wasn’t the right time.

Eventually he proposed in the beginning of 2022 and they’re planning their wedding for next year.

So the reasons were that he didn’t have a stable job for the first few years of their relationship and only jumped from position to position from Walmart to target etc. He hadn’t finished his degree yet so he had no higher education, he got his degree in 2019 and only then was he able to get a proper job. He bragged and also “thanked” Chrissy for never giving up on him and growing with him and how they helped each other form their amazing personalities and achievements and how no matter what the future holds he’ll never forget etc.

My fiancée and I felt some type of way about it. Some friends of mine and chrissy agreed how chrissy basically stayed with a broke man and waited for 7 years and we don’t think that’s something praise worthy but pity worthy.

As friends we decided to explain to her our perspective of how we think it was ridiculous that she had to almost reach 30 to move on with her life with that man when someone else could provide what she needed much sooner. Chrissy always said how she wanted marriage and kids and its sad she had to wait this long for this man to get his act together and she didn’t know her worth.

She said she loves him and he’s an amazing partner and wouldn’t break up with him over his misfortunes and what matters is that they love e/o. I told her it’s dumb how she’s marrying for love and not for stability and how she’s basically wasted herself for “love”. And how the first issue should be raised when he was working Walmart and target back to back.

She called us all materialistic and classist and she said she doesn’t care if she struggles financially as long as she struggles with the right person who will value her emotions and listen to her. She said we are miserable bitches who will find no happiness in life and are very shallow. Could we be TAs for criticizing her this way?

After reading this story, it’s obvious that “Am I The A-hole?” was a rhetorical question

Although there were a number of issues with our OP’s methods of thinking, the most classist of them all was that according to her, it was apparently “wrong” to have lower paying jobs pre-degree. It’s not uncommon in our economy for college students to have minimum wage incomes. By her method of thinking, it’s assumed that her fiance basically needed to be rich if he was going to be in a relationship at all. Not only is that unrealistic, but also showed her true colors and classism.

Do you think she had the right to say what she did? Or was it completely out of line? Let’s see what some other Redditors had to say.

Commenters decided that OP most definitely was the “A-hole”

People like OP lack any form of introspection, even with this verdict she will go through life believing her disgusting views on the world are correct.

Apparently it never occurred to her that maybe Chrissy didn’t WANT to be married at 23… Chrissy may have had every intention to wait till she was 30 to get married either way, she just found her person pretty young, so she was happy to hang with him until the time when she would have wanted marriage anyway…

but I think OP is probably just jealous… she says she’s been with her partner for 4 years and they’re “going to get engaged eventually” (but clearly it’s not in her immediately future)… so OP may very well be looking at 7 years of dating before an engagement herself, except where Chrissy was younger and fine with that, I think OP realizes she’s older and so feels the need to criticize long periods of dating because she’s afraid she’ll end up like Chrissy but older.

Absolutely! If I was the partner of any of these…. „Ladies“, I’d strongly reconsider my relationship, cause they clearly neither understand „for better and for worse“ nor are they trustworthy in case of losing my job…

Also, she’s acting like her friend is a shriveled up old bat, when she’s just 27!!!!

My sister and her now husband were together from 18-29 before they married. At the time of their marriage he was in the process of getting his 2nd pHD. He didn’t have any job until he’d finished his master’s and lived with his parents to concentrate on his studies. Now, only 4 years later they have a own house, 2 cars and 2 sons (one turns 3 in August… honeymoon baby😅).

So WHAT EXACTLY is „unstable“ about a decent guy with a degree and a good job?

YTA and I hope you’re all uninvited to the wedding!

So let me get this straight. Chrissy met this guy when they were in their 20s, which means they were either in college or working any job they could get without a college degree. He worked really hard to get out of “low salary” jobs, and bounced his way into a more stable, higher paying salary. Then once he had a stable job (after 5 years of dating), Covid lockdown hit and he waited to propose to her until after everything calmed down. Now here we are at the proposal dinner.

Honestly Chrissy and her fiancé sound like really mature and responsible people. Waiting until they were financially stable enough to move forward with their plans of marriage, so they weren’t relying on their families to pay for everything.