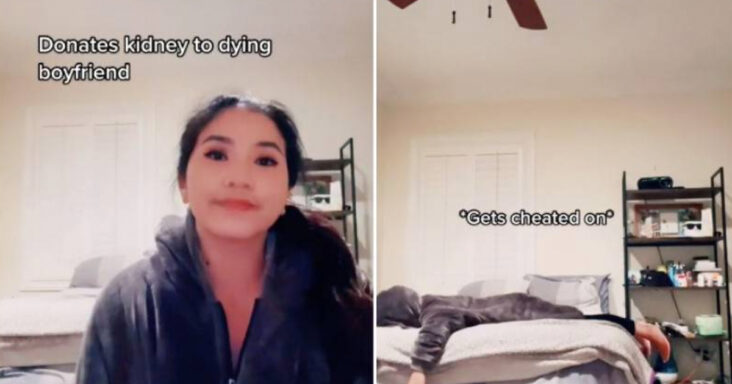 To take the risk of dating in today’s society is something less and less people are willing to go through. It’s unfortunate, but dating just isn’t the same as it used to be. Too often do couples get together for status and “fun” rather than love, resulting in multiple failed relationships even before the age of 21. The main reasons why relationships fail are loss of trust, poor communication, lack of respect, a difference in priorities, and little intimacy.

Finding out you’ve been cheated on after donating an organ is a hard pill to swallow- for Tik Tok user colleeeniie this is exactly what happened.

Semi-viral TikToker colleeeniie came forward about the situation that broke her trust five years ago via comedic relief. She posted a video that recieved over 2 million likes and 40k comments discussing how she had donated a kidney to her “dying boyfriend” and then got cheated on regardless.

Donating an organ is a huge personal decesion to make, even more so donating to your short-term partner. According to an interview with Buzzfeed, Colleen had only been with her boyfriend for 7 months before undergoing surgery. She had been aware of his medical condition from the start, but as they began to date, his condition worsened and he encouraged her to get tested to see if she was a match for donation.

The couple underwent the operation together

After Colleen made the significant decision to go through the surgery, the couple went through the operation and began the lengthy healing process together.

7 months after the procedure, her boyfriend showed up at her house unannounced

Colleen explained how her ex-boyfriend showed up unannounced at her home one night after being away at a bachelor party. During this impromptu meeting, he proceeded to share that he had done something he couldn’t take back. He had cheated on her a mere 7 months after they underwent a major operation together. Furthermore, an operation that required Colleen to donate an entire organ.

The two obviously broke up, and a long five years later, Colleen decided to come forth on the social media tyrant that is Tik Tok. Views came quick, and soon her video had over 16.6 million clicks.

The comments came flooding in:

Her video took off on Tik Tok, with commenters outraged at the situation. Watch the video here:

In a series of follow-up videos and comments, Colleen continued to explain the surprising situation in more detail:

Everyone supported Colleen from the start. She continues to post about her experience to this day despite having “moved on” and “healed” from the event 5 years ago. Below are some of the top comments on the story.

Some viewers however, were out for blood:

Despite her horrible experience, Colleen had a few words to say in response to all of her followers

She said, “I didn’t think it was going to get viral the way it did. Most of the responses to the video were really positive, heartfelt, and sweet, and some have said that it gave them hope. It feels amazing to know that my videos are giving them hope and having them believe that despite all the hurt, everything will be okay in the end.”