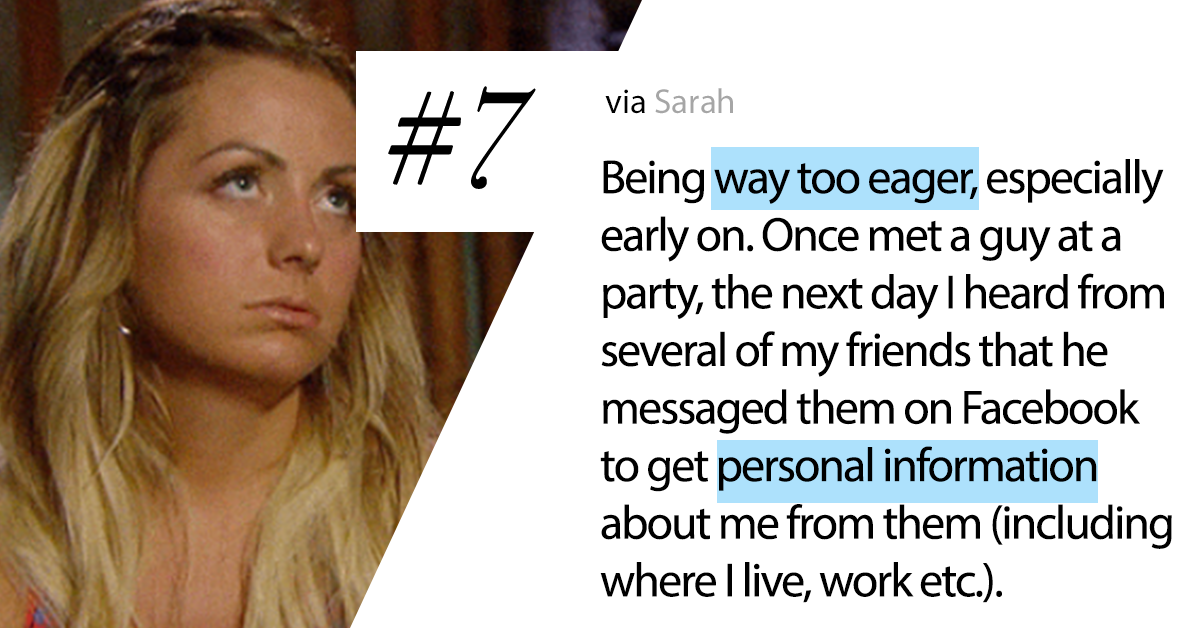 Some guys don’t take hints very well. These are the guys who think it takes only one little move to win over a lady’s heart. Not that easy, bro. The thing you think will sweep her off her feet is more than likely going to leave her sweeping her fingers left on your Tinder profile. Next!

Going through a girls entire FB or instagram and liking all of her pictures when she adds you. Super creepy.

I had a guy that went through and found every picture of me in a bathing suit and liked those. I think the most recent was five years old, and none were from them same album. I blocked him.

Constantly bitching on the internets how you are forever alone.

Trying to talk to a woman from a car in an urban/dark/dimly lit area.

Be aware of surroundings before complimenting/flirting/asking for her number. We generally are aware of our surroundings, as for some of us, safety is in the forefront of our minds.

Covertly following me and at some point revealing that you have. I had one guy do that who expected praise over it, over how smart he was. It’s one of the dumbest moves I’ve ever even heard of.

Being way too eager, especially early on.
Once met a guy at a party, the next day I heard from several of my friends that he messaged them on Facebook to get personal information about me from them (including where I live, work etc.).
I also once had a guy from my university (I met him in one of my classes but we never really talked) send me a romance poem. Not creepy but definitely weird.

Refusing to give up after we’ve already said we’re not interested.

Telling them they should smile more

When you are kissing whatever and they emit a high pitched, breathy whimper. I swear guys think this is sexy or cute but it’s creepy af.

Foreplay that’s too feathery-stroky. Just no.

Just don’t do anything that you think of as romantic unless you know she is also interested in you or you’re going on a date.