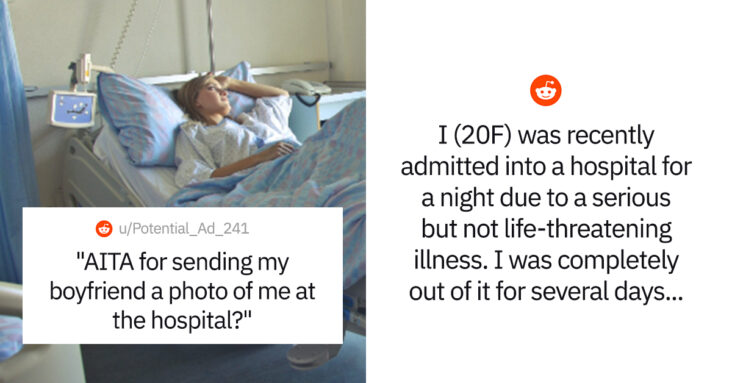 Young love, something most of us go through and grow through. When dating at a young age, you don’t tend to find yourself in real-life situations that take genuine love very often, but when you do, the situation typically reveals some true colors. To find out your significant other is sick at any age isn’t an easy situation. It’s generally a given that if you even care about your partner a little, you’re going to want to be there for them in their time of need.

For one young couple however, some true colors were shown after a trip to the hospital, and they were necessarily pretty. User u/Potential_Ad_241 came to the “Am I The A-hole?” community on Reddit to ask if she had been in the wrong for sending her boyfriend a selfie while emitted into the hospital. Needless to say, he didn’t handle it well. Read the story in context below and leave some advice behind for the OP!

“He responded a few hours later with a thumbs up and that was all.”

OP asked Reddit: “AITA for sending my boyfriend a photo of me at the hospital?”

I (20F) was recently admitted into a hospital for a night due to a serious but not life-threatening illness. I was completely out of it for several days with horrible pain before my roommate convinced me to get medical help. She took off work to stay with me in the hospital and I cannot express how much her support has helped as my own family lives too far away.

Now I’ve been dating Sam (19M) for about nine months. He knew I was sick and so I texted him when I was first going into the hospital to update him. Since he was working he didn’t read the message until much later. I sent him around 6 texts updating him with what the nurses were saying and including a photo of me on IV giving a thumbs up. It was my first time ever in the hospital and I just wanted to keep the shitty situation as light-hearted as possible.

He responded a few hours later with a thumbs up and that was all. I asked if everything was all right and he said “yeah just you being in the hospital is giving me a lot of anxiety, i’d rather not see you looking like that.” I told him that was okay and didn’t message him for the rest of the night, not thinking much of it.

The next afternoon his mom called me asking if I was okay. She had the impression that I sent him the hospital photo after he told me not to share any information and was disrespecting his request. She reminded me that his grandfather only died a year earlier where Sam had to spend a lot of time in and out of the hospital so the updates were making him grieve all over again. I apologized to her and sent him a text saying that I didn’t mean to hurt his feelings. He left me on read.

My roommate thinks I didn’t do anything wrong at all and he’s being too sensitive/immature for involving his mom. Personally I think this is a bit unfair as he was really close with his grandfather and struggles with anxiety. I feel really really guilty as I know how mental health can be and never want him to suffer. AITA?

After contemplating, OP added an update to her post:

This morning I woke up to a text from Sam asking for a break. He told me he needed to focus on himself and that “there is too much drama in this relationship”. I agree.

I’ve been with Sam through all of his anxiety attacks, holding him crying in my arms more times than I can count. He has never done the same for me. I’ve made excuses over and over again for this behavior. I’ve begged him to go to therapy and he’s always refused. This hospital stay (and your comments) have been eye-opening.

Along with an update on her boyfriend’s mom…

Oh and his mom? “she reminded me to let go of my feeling and do what’s best for me. i’m starting up therapy bc i’ll be needing the support when you’re gone.” I actually laughed out loud at that one. She hasn’t reached out to me yet and I hope she never does.

My roommate and I are figuring out how to end things once and for all. So yep, that’s it for now. Feeling a lot of emotions but I know it’s for the best. (Also thank you so much to all the lovely Redditors who have given advice and wished me well, I’m doing much better and appreciate it a ton.)

Redditors were baffled at OP’s boyfriend’s immaturity and had some advice to give her: