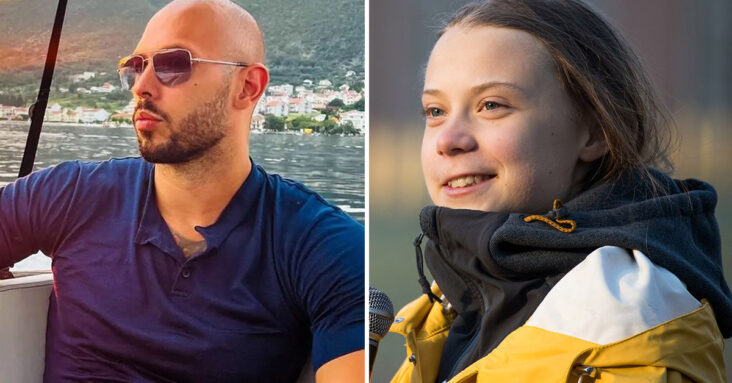 As much as we hate to give Andrew Tate any kind of press — especially the bad press he seemingly craves, this one is kinda funny, especially for someone who fashions himself as the pinnacle of male toughness because when I think of “tough” guys I definitely think of picking on climate teenage female activist Greta Thunberg.

The misogynistic influencer was finally allowed back on the social media platform last month, as part of Elon Musk’s plan to welcome rightwingers banned for harassment and encouraging violence and then pretend they had never broken any of Twitter’s rules.

For the most part, Tate’s return has been easy to ignore thus far, which may have been part of the reason behind his decision to try to stir up drama with the 19-year-old climate activist.

The desperation for attention is a familiar stench on Tate, and he is hardly the first grown man who has stepped to Thunberg to try to find it. Why right-wing guys are so obsessed with picking fights with a literal teenager is beyond the scope of rational comprehension, yet here we are, time and time again.

That said, Thunberg has become accustomed to dealing with these “Chads” and knocked Tate flat in no time.

The exchange would have been excruciating to watch if Tate himself elicited any sympathy whatsoever, but as we are far beyond that as a society, the brutality and ease with which Thunberg called out his blatant attempt at peacocking — and just as casually dismissed it — only served as amusement.

After nearly 12 hours, Tate replied to Thunberg, with what was basically the equivalent, of “I know you are but what am I?”

You’d think for all the millions he claims to have he’d be able to hire better comeback writers, but here we are.