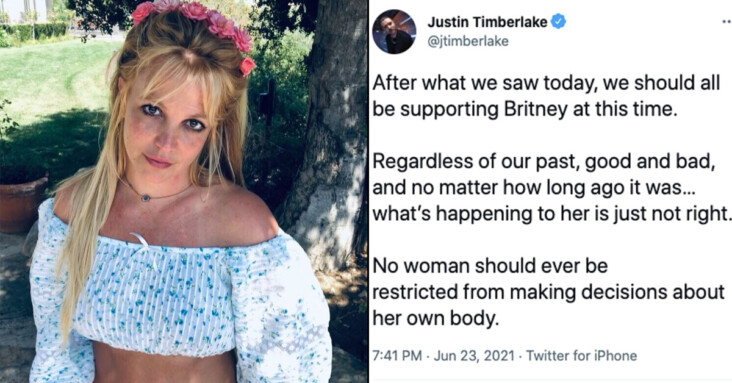 Britney Spears’ conservatorship has been on the minds of fans for some time now, but the pop star spoke out about it in court for the very first time on Wednesday, and the support is pouring in.

Spears has been under a court-ordered conservatorship for 13 years, leaving her unable to be in control of her own life, from the mundane to the bigger picture. While she is generally seen as an upbeat presence on social media, the frustration and trauma she’s felt over the past years were apparent during her address to the court.

“I thought I might become happy because I’ve been in denial,” she said. “I’ve been in shock. I am traumatized. You know, fake it ’til you make it. But now I’m telling you the truth, okay. I’m not happy. I can’t sleep. I’m so angry it’s insane and I’m depressed.”

Spears detailed how having every decision about her life go through her father has had a negative impact on her life, from feeling like she had no choice but to perform, to being medicated against her will, to not even being allowed to get married or take her IUD out so she can start a family with her current boyfriend.

“I feel ganged up on, I feel bullied, I feel left out and alone,” she told the court. “I’m tired of feeling alone. I deserve to have the same rights as anybody.”

The internet is staunchly on Britney’s side, with very few people believing that there’s any legitimate reason for a 39-year-old woman who appears perfectly capable of leading her own life to be under anyone’s thumb.

“After what we saw today, we should all be supporting Britney at this time,” her famous ex, Justin Timberlake, tweeted following her remarks. “No one should EVER be held against their will… or ever have to ask permission to access everything they’ve worked so hard for.”

Other celebrities have spoken out in support of the icon as well.