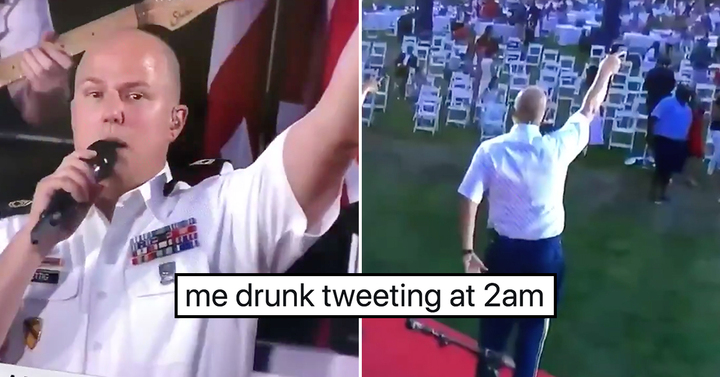 As is tradition, the White House hosted a Fourth of July party. The president spent the Fourth of July weekend at Mount Rushmore making sure the Indigenous population of the area got arrested for protesting his presence. Maybe that’s why there were fewer people at this party, which based on the footage, seemed to mostly be for children and random women wandering around looking confused. The only videos I have really seen of the event, though, is this white guy singing the Bruno Mars hit “Uptown Funk” to a crowd of dozens:

That’s what the kids call “cringe,” right? I have no idea what that man’s politics are, he may completely deserve this nightmare performance scenario, but I am slightly impressed by how much heavy lifting he’s doing at the mic in that clip. While many took the viral video as an opportunity to mock Trump (because Barack Obama had the REAL Bruno Mars at one of his parties), a lot of people actually kind of identified with the man singing. He’s doing a lot of crowd work and pretending something totally stupid is awesome. Haven’t we all? He is our new, sad meme. Welcome to the club, my man:

OMG. Check out that CROWD https://t.co/8iNHx0xMjk

me doing standup comedy after the vaccine pic.twitter.com/qKWfIimCxW

when ur trying to hype yourself up out of your depressive episode
pic.twitter.com/FTUvWmJpya

Me tweeting shit on twitter thinking I’m gonna get replied to pic.twitter.com/b2O46JUcMm

5 year old me singing to my teddy bears pic.twitter.com/1N3sMUCbR9

me when i was 7 preforming for my stuffed animals and imaginary friends pic.twitter.com/HDedp7R77L

me tweeting about ever minor inconvenience as if my followers give a fuck pic.twitter.com/oK2PyqXROU

me drunk tweeting at 2am pic.twitter.com/FCk6RXitBe

“hey brandon what’s it like when you play those big outdoor euro festivals?” https://t.co/YiKin4Jfju