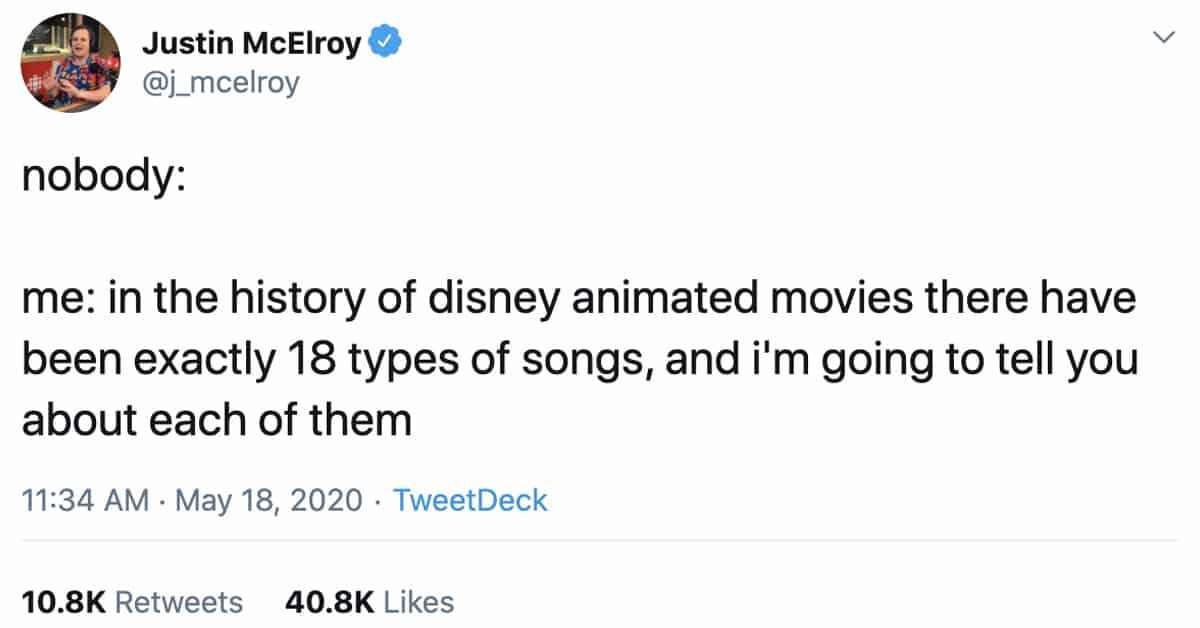 People love a good Twitter thread. There’s just something about a stranger passionately breaking down some piece of pop culture minutiae tweet by tweet that really gets peoples’ nerd engines humming. So when reporter Justin McElroy fired up a thread promising to break down the history of Disney movies by song type, people grabbed their animated popcorn and settled in.

me: in the history of disney animated movies there have been exactly 18 types of songs, and i’m going to tell you about each of them

McElroy bolstered his case with video montages and gave each archetypal category of Disney song a title like “This Is The Movie” or “We Should Bone.”

– It summarizes the theme of the film or says its title several times
– It is at the beginning of the film (exception: Beauty and the Beast, Pocahontas)
– It is first sung by a chorus, or an unseen or minor character (exception: Pocahontas) pic.twitter.com/yEk048reux

– It is sung by the main character (exception: the Frozens, Ralph Breaks the Internet)
– It is a monologue, sung alone — or to animals! — expressing their greatest desires pic.twitter.com/H8aHIBZUz1

– It’s sung by the villain (exception: Cruella De Vil)
– It always comes after the I Want songs
– It usually expresses the villain’s desire, but can also be mocking the main character pic.twitter.com/DQRtChVjRC

– Never happens in the first-third of the movie (exception: One Song, Love is an Open Door)
– Can be a duet, monologue, montage, OR a separate character egging things on
– If a man is singing, he’s either egging things on, or in a duet pic.twitter.com/TgJFyAkzlX

– It’s always sung by a supporting character who likes the protagonist
– The theme is always positive
– It generally builds up to dancing or fevered choreography, with an element of “let’s put on a show!” pic.twitter.com/CIhAbY1IIt

6. These are the biggies but McElroy claimed to have identified many other types of Disney songs

The core songs of great Disney movies are in the This Is The Movie/I Want/I’m The Villain/We Should Bone/Cheer Up Kid! categories, particularly once the Disney Renaissance starts.

But there are five other song types that are very important to the Disney canon.

– It expresses a character’s their joie de vivre, often in a bragging way
– While the I Want song is about inner desires, this expresses outward joy
– It is sung by the main character or clear second, soon after we meet them pic.twitter.com/PO8GRbN7Ri

– It expresses the MO of a group of characters and their motivations within the movie
– It is usually very early on the film
– The song generally shows the characters working, or talking about a specific desire pic.twitter.com/1fzSGNJXzD

– A character or two best friends is being described by another person or group
– Usually sung shortly after we meet the character (or Aladdin’s case, reinvention of the character)
– Often has elements of a montage & and an unseen singer pic.twitter.com/ZGufU78L2z

– The downbeat counter to “Cheer Up, Kid!”
– The song expresses hope, but can indicate doubt
– The tone is warm, quieter, or downbeat. No dancing happens
– It’s generally sung by a supporting character that helps the protagonist pic.twitter.com/VeSWD0bXf0