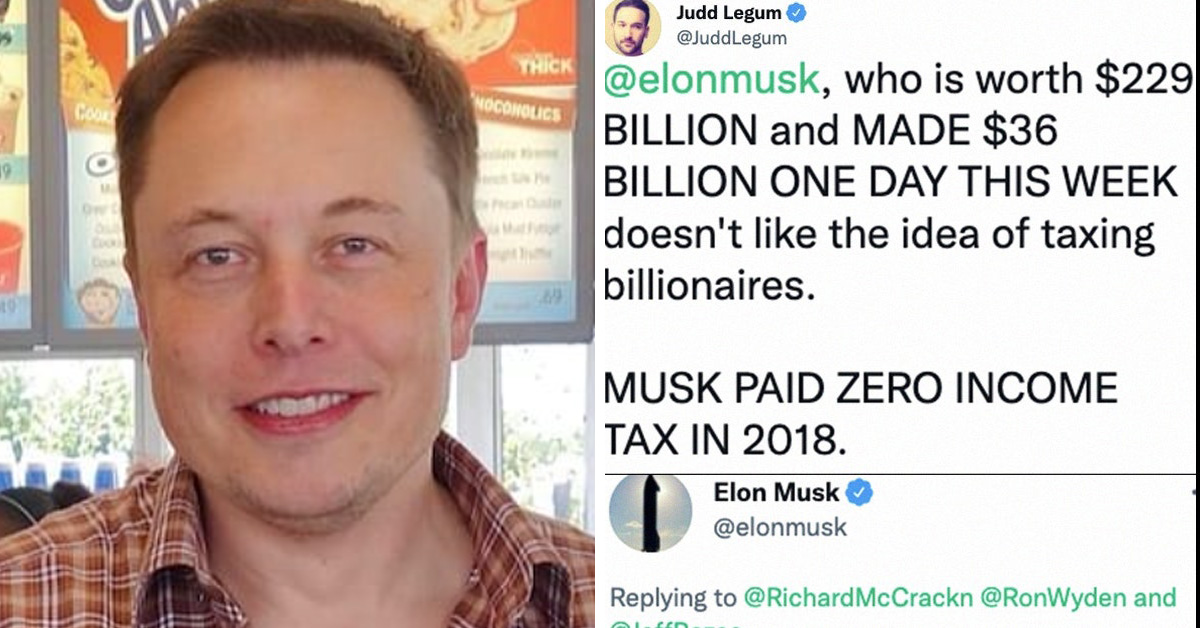 A surge in the stock price of electric car company Tesla earned billionaire and guy who accused a rescue worker of pedophilia for not using his submarine thing Elon Musk $36.2 billion on Monday — the largest single-day jump in the recorded history of Bloomberg’s Billionaires Index.

This jump once again puts him at the top of the list of the world’s wealthiest individuals, passing up former Amazon CEO Jeff Bezos, though it may be only a matter of time before Musk tweets something stupid and the stock takes another dive.

Musk’s total net worth now sits at $289 billion after skyrocketing up from $24.6 billion in 2020. Every top billionaire on the list of the world’s wealthiest saw a massive spike in their worth after the first year of the pandemic while many millions lost jobs, businesses, loved ones, and lives. These are the same people who pay very little, if anything at all, in income taxes because they’re able to afford the best accountants and set up offshore accounts to hide their giant money piles.

Those billions of people who are struggling daily just to get by are left wondering when this madness will end.

Meanwhile, Musk has been attacking President Biden’s proposed tax on the assets of the wealthiest individuals and corporations, repeating tired old lines about whatever he thinks socialism is.

“Eventually, they run out of other people’s money and then they come for you,” Musk tweeted in a reply to someone putting out a template for an email people can send to urge lawmakers to oppose the tax.

This is a paraphrasing of former British Prime Minister Margaret Thatcher’s quip on socialism, saying that the problem with the system defined as when workers control the means of production is that “eventually you run out of other people’s money.”

This makes about as much sense as what Musk said, meaning none, but with Tesla currently valued at over $1 trillion and he sometimes makes tens of billions in a single day, we’ll have plenty of time to consider what to do with him when his money allegedly “runs out.”

That won’t actually be a problem, however, because the proposed tax only affects the “unrealized gains” of the wealthiest 1,000 people in the nation. This closes a loophole that billionaires like Musk use to dodge the capital gains tax, which would also be raised by Biden’s tax plan, but only to a rate of up to 39.6 percent, leaving the other 60.4 percent of Musk’s obscene profits to him and potentially his poor doomed-to-be-super-weird child.

Musk’s income tax rate would remain at effectively zero under this proposal as well while those who make $40,526 to $86,375 in 2021 will pay a rate of 22 percent. Normal people don’t have “capital gains,” and so can’t be taxed on them. It’s hard to imagine a scenario outside of complete international societal collapse that would result in Musk running out of money as the majority of Americans live paycheck to paycheck.

Billionaire corporation owners also enjoy billions in tax subsidies from the government every year while the rest of us get small one-off checks under only the worst scenarios, so don’t worry about Musk. Every single broke or nearly-broke person making up most of Twitter sure isn’t worried about him.