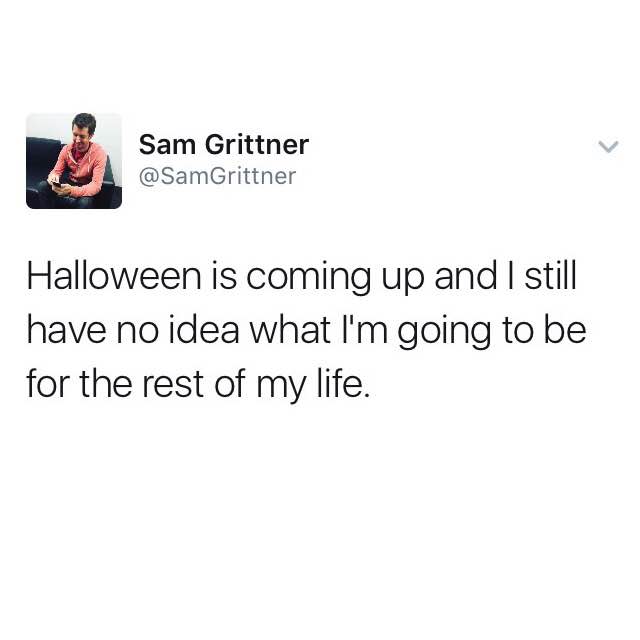 When I was a kid, the best thing about Halloween was the candy.

Now that I’m an adult, the best thing about Halloween is the tweets.

And that is easily the most depressing thing I have ever written.

So, I’m going to go drown in despair and while I’m doing that, you should have a look at some of the funniest Halloween tweets that have ever graced the Internet.

if you’re in seattle and you drive by my house prepare for the fright of your life pic.twitter.com/xTp3ucjjtw

Halloween is coming up and I still have no idea what I’m going to be for the rest of my life.

1 out of every 5 people you see dressed up at your halloween party is just me, changing costumes, every 6 minutes

I couldn’t find a Halloween wreath that was scary enough so I’m just gonna hang a 2016 calendar on my door.

Halloween is my favorite holiday where you can trespass on a stranger’s property and make a non-negotiable demand.

If I pay $40 for a haunted house I better die

Couples Halloween costumes always end up looking like one person went along with it to save the relationship.

For Halloween this year, I’m going as the parents from Dirty Dancing since I’ll already be yelling at everyone for having fun.

Sure, I have gluten free Halloween candy for your kid.
*Reaches in pocket & pulls out middle finger*
Get off my lawn before I call the cops

If you really want to scare everyone this Halloween, dress up as intimacy.

Halloween is the only time I can wear a wedding dress and not look desperate.

What’s a good Halloween costume that doesn’t require makeup and isn’t uncomfortable and is my regular clothes?

Go to a costume shop, hang out by the wall of president masks, and ask an associate which one shows up blurriest on a bank surveillance tape

The Halloween knock-off costume names are so good pic.twitter.com/NC2DWjGR4g

My daughters used to wear inappropriately sexy costumes for Halloween but now that they’re 16 they only dress that way all the time.

For Halloween this year I’m going as a fatter version of myself last year.

The more effort you put into dressing your dog for Halloween, the more everybody else feels sorry for you.

I just got invited to a Halloween party today, which gives me weeks to come up with a really cool costume!

Going to Halloween parties and pretending to be someone I’m not is good practice for the family Christmas party.

If you’re looking for more Twitter fun, there are a shitload of funny tweets for you to enjoy right here.