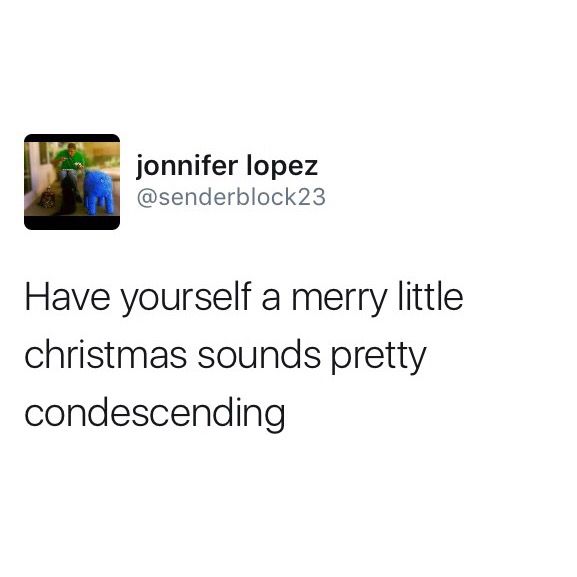 It doesn’t really matter what you celebrate this time of year.

Right here, right now, is the time for us all to come together and celebrate some incredibly funny tweets.

Before you head off to find out if it’s actually even possible to enjoy eggnog after the first 3 or 4 sips, you should have a look at some of the funniest holiday tweets that have ever graced the Internet. 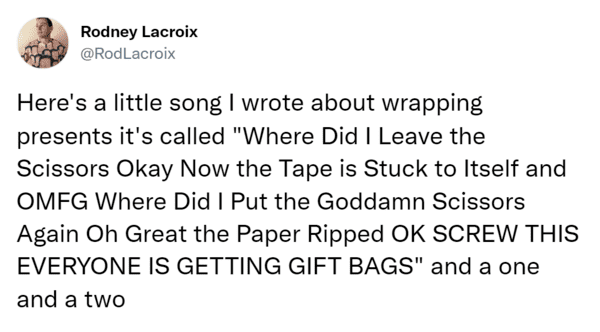 me: i wrote you a song, it’s called ‘rudolph the red nose reindeer’
rudolph: it better not be about my nose
me:
rudolph: sing the song keith

One of my 4 nephews just brought me wine and said, “Here’s your Christmas juice,” and now he’s the one I’m leaving everything to.

[heaven]
ME: Lord?
JESUS: My son
ME: I have an important question
JESUS: I know…The meaning of life is f-
ME: Is Die Hard a Christmas movie?

It doesn’t feel like I’m truly home for the holidays until I’ve taken my parents’ phones and said “Here let me show you” at least 25 times.

On the 13th day of Christmas, my true love said to me, “I think I might be a hoarder.”

Any tree can be a Christmas tree if you yell at your family around it.

Just once I’d like to see a big event-movie trailer that opened with “THIS HANNUKAH, IN A THEATER NEAR YOU…”

“Um wow okay”
-all of Santa’s other reindeer

My mom has been attending her own personal Ugly Christmas Sweater Party every holiday season since ’88.

If I don’t see two minivans lock reindeer antlers for a Target parking space, what are the holidays even about?

“How about… we change the 6 to a 7?”
“I love it!”
–board meeting at the company that makes novelty sunglasses for New Year’s Eve

My cat forgets what a Christmas tree is every year and it’s wonderful pic.twitter.com/LlY3lx5BnJ

“I don’t trust Muslims, they have some funny beliefs and customs,” he said while dragging a pine tree into his living room for some reason

We Wish You A Merry Christmas is my favorite because it’s like ‘I hope you have a good holiday now give me some pudding or I’m not leaving’.

How about, instead of saying “Merry Christmas” or “Happy Holidays,” everyone just shuts the fuck up?

Being a good husband is realizing that all the free time you used to have is now owned by anyone who invites your wife to a holiday party.

For someone that has a Christmas special, Charlie Brown has a pretty Jewish disposition.

“Instagram is being attacked by pictures of couples in front of Christmas trees!”

Grandpa: this is bullshit!

On the worst day of Christmas my true love gave to me: Grown Ups 2 on 3D TV

[searches ‘Chanukah’]
Did you mean Hanukah?
I DON’T KNOW, GOOGLE. NO ONE DOES.

I don’t believe in killing perfectly healthy Christmas trees for decorative purposes. When I kill a tree, it’s strictly for pleasure.

All I want for Christmas is for someone to pay off my debilitating student loans…but I guess this mug is good too, thanks.

For some reason there are ants all over my Christmas tree, from the presents at the bottom all the way up to the McRib tree topper.

Worst things the parents do on Home Alone:
3. Never punish Buzz
2. Forget one of their kids
1. Try to make everyone drink milk with pizza

Nothing like opening Christmas gifts to remind you that the people you’re closest to in the world know absolutely nothing about you.

Joseph: More like “Joseph Christmas”
Mary: we heard you the first time

My mom already asked me to make a Christmas list so I did pic.twitter.com/D8wSnTflst

“Hello relative. You look one year older than Christmas last year due to the progress of time. Here is your necessary gift.” – Holiday talk

Get into the Christmas spirit by remembering how cool Joseph was about an invisible guy impregnating his lady Mary.

My favorite Christmas carol is the one where they blame the weather for their social anxiety and just stay home.

Rudolph the Red Nosed Reindeer is my favorite Christmas story about how Santa’s reindeer are bigots until they need someones help.

The Hannukah miracle is that the menorah oil lasted 8 extra days. I recreate this miracle with every tube of toothpaste.

‘Twas the night before Christmas

And all through the zoo

Every creature was stirring

How much longer?
Did you bring any snacks?
They want $5 for M&M’s!
I wanna go home
Is it over yet?

– me watching my kids Christmas pageant

If you’re looking for more Twitter fun, there are a ton of funny tweets for you to enjoy right here.