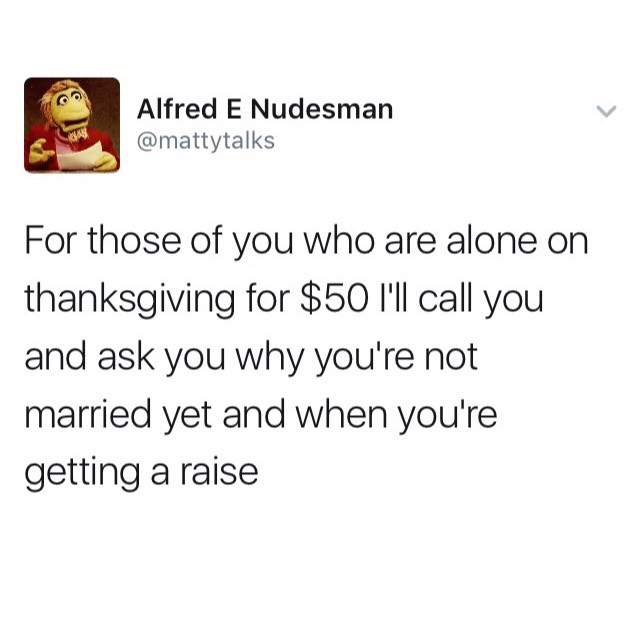 If the Internet were a Thanksgiving dinner, the following tweets would be the gravy you’d pour on top of all of it.

They cover just about anything and everything you might encounter while you’re stuffing your face with highly-caloric cuisine and getting into heated arguments with family members.

Before the big day comes, you should have a look at some of the funniest Thanksgiving tweets that have ever graced the Internet.

Golden Corral Thanksgiving Day Buffet! Only costs 12.99 and any chance you have of ever being happy again

This Thanksgiving for the first time ever, your drunk uncle will seem quite “presidential.”

My favorite thing about Thanksgiving is watching someone else do the dishes.

LIFEHACK: When you sit down for Thanksgiving dinner this year, set the tone by quietly placing a small handgun on the table in front of you

Happy Thanksgiving to everyone visiting their parents. pic.twitter.com/hRxI5EyssU

Look at the people in the room with you. Tomorrow, one of them will die in a Target.

My favorite Thanksgiving tradition is finding mysterious crumbs on me for the next seven to ten work days.

Thanksgiving. Oh god I hope my dad doesn’t ask abo-
“Did I ever show you kids the episode of woody the woodpecker where he says the n-word?”

Every year I hope someone in the Macy’s Thanksgiving Day Parade just stops, looks around, and says “Guys, what the fuck are we all doing”

[Thanksgiving]
Who’s ready for dinner?!
*family starts going nuts*
Ok here it comes!
*fires turkeys across the room out of a t-shirt cannon*

Friend: What are you going to make for Thanksgiving?
Me: Probably a scene.

“Did you have a great thanksgiving?”
Uhm it was okay
*coworker gets beet red in face*
“I said “have a GREAT thanksgiving” on Wednesday pal”

Before Christmas lights, people would set their houses on fire the day after Thanksgiving.

THANKSGIVING: I’m thankful for this beautiful world we live in
BLACK FRIDAY: *beats an old lady to death with a 42″ Vizio LCD Smart TV*

On Thanksgiving, when spending time with your loved ones, the most important thing to remember is that mother turkeys sing to their young.

Stay in shape this Thanksgiving by running away every time you see someone you went to high school with.

A pretty safe bet this Thanksgiving, is declining any email invitation that begins with Fwd: FWD: Re: FWD: re: re: Fwd: fwd: RE: Fwd: Fwd:

And we’re at the part of Thanksgiving night where my wife’s uncle is describing what technically constitutes a proper noose.

you don’t need thanksgiving to hate your family

Remember last year when you were four hours late?

Yes, mom, I do. It was the best Thanksgiving I’ve ever had.

This movie poster looks like Sylvester Stallone took Michael B. Jordan aside to gently remind him about Thanksgiving pic.twitter.com/mEn0nNZKci

[obama thanksgiving dinner]
*obama carving turkey*
“Hey barry”
Joe, wha-
“Barry when do we open presents?”
Joe what are you even doing here

[Thanksgiving at the In-laws]

Me: “That’s right. She’s got a tapeworm”

WANTED: big, sexy black guys to accompany me to my racist cousin’s house on thanksgiving.

coworker: how was your thanksgi-

me: *puts my finger to their lips* shhh…everyone who I want to know about my thanksgiving was there, ok?

If you’re looking for more Twitter fun, there are a ton of funny tweets for you to enjoy right here.