Poor Jeremy Renner. He was just trying to do something nice by launching an app for his fans to connect on. He thought maybe they could bond over their love of his work and even have some fun. What ended up happening, however, was that Renner and his fans got trolled so hard that now the whole thing has had to be shut down.

The app, aptly titled Jeremy Renner Official, had no verification system, thereby making it way too easy for trolls to infiltrate the app and even impersonate the actor. It became increasingly unclear that the whole user experience was a little chaotic and couldn’t really continue on.

Renner announced the app’s imminent closing to users via a push notification in a message that said only, “App coming down very soon…” However, he soon expanded on that brief thought by providing a more detailed explanation of his decision to close the app in a post… on the app. Ahem. 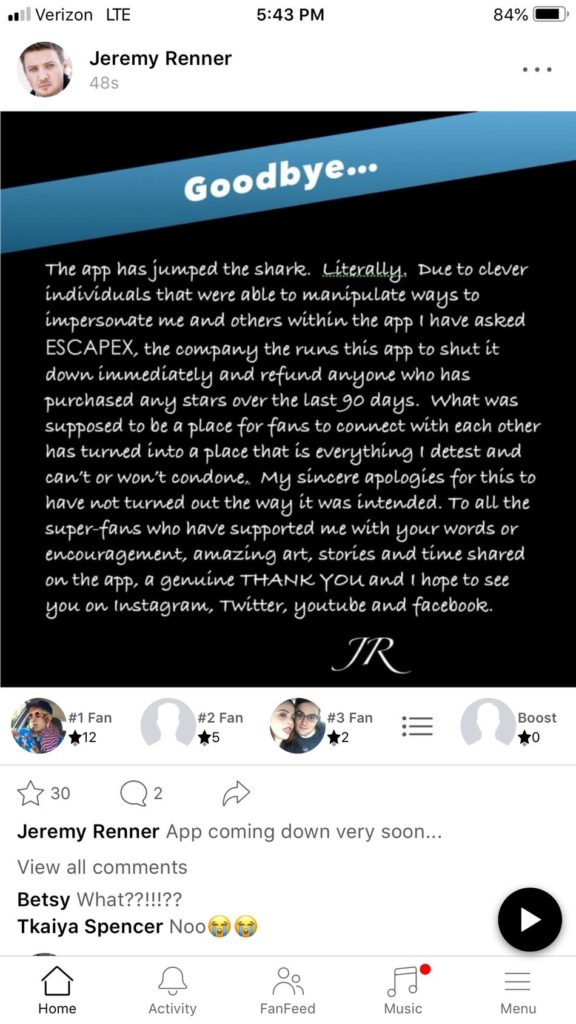 “Goodbye … The app has jumped the shark. Literally. Due to individuals that were able to manipulate ways to impersonate me and others within the app I have asked ESCAPEX, the company the runs this app to shut it down immediately and refund anyone who has purchased any stars over the last 90 days,” Renner wrote.

“What was supposed to be a place for fans to connect with each other has turned into a place that is everything I detest and can’t or won’t condone,” he continued.

“My sincere apologies for this to have not turned out the way it was intended. To all the super-fans who have supported me with your words or encouragement, amazing art, stories and time shared on the app, a genuine THANK YOU and I hope to see you on Instagram, Twitter, Youtube and Facebook.”

The Jeremy Renner Official app launched back in 2017 but the recent spate of trolling was enough to make the star pull the plug on the whole operation. You see, guys? This is why we can’t have nice things!!

my wife and I announced our divorce on the official jeremy renner app pic.twitter.com/JXaG1mpqxN

Remake THE SOCIAL NETWORK about the Jeremy Renner app

i tried to take a screenshot of me “pretend” buying $99.99 worth of stars on the jeremy renner app but I used my thumb to take the screenshot and accidentally authorized the payment. I wish this was a joke pic.twitter.com/wvVXVDpMJs

got my $99.99 back from jeremy renner hell ya I’ll drink to that pic.twitter.com/KNCiSF6LzB

In the past few days the Jeremy Renner app has turned into the darkest corner of the internet pic.twitter.com/SuywxqLx7m

Working on a new project for Mr. Renner, hope he likes it: "The Porno-Free Jeremy Renner App." pic.twitter.com/OmnAXKy32O

It is with a heavy heart that I must announce I have been banned from the Jeremy Renner app for this post. pic.twitter.com/uRFkwAcHjN

The Jeremy Renner app is pure chaos I can’t get enough pic.twitter.com/OLmlPRxWlQ

(1/?) I’d like to take you through the Jeremy Renner app, if you haven’t download it. This is what it looks like on your home screen, and the first thing you see when you open it: pic.twitter.com/jLbP3O5xmy

lmao they actually let my review of the jeremy renner app go up pic.twitter.com/6iKZ3fUx1P

This is what Jeremy Renner thinks was happening in his app when it was literally just people signing up pic.twitter.com/cCKmgi9aKV

I feel like they could have just made it so you can’t make your username “Jeremy Renner” and that would have solved this problem but no they’re just gonna delete the whole app pic.twitter.com/Huijq2E4CF