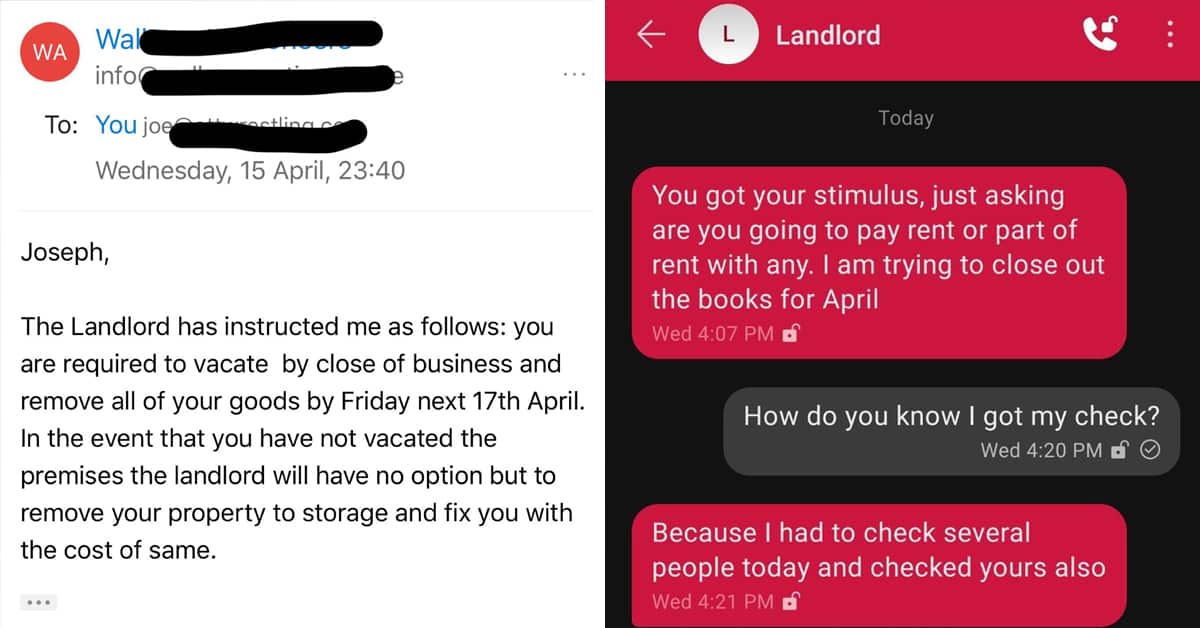 Much of the world’s population rents their home and that means dealing with the home’s actual owner, AKA the landlord.

And while many renters’ relationship with their landlords is already tricky at best, the coronavirus pandemic and the sudden and extreme financial pressures it has placed upon renters has pushed those relationships to the edge. How a landlord deals with the reality of his tenants not having enough money to pay the rent through no fault of their own says a lot about them as a person. Those who act greedy in a time of hardship are, as the kids say, telling on themselves.

It’s a moral test. And many landlords are failing it.

Here are 16 landlords who got publicly called out for their pandemic misbehavior.

My friend’s landlord has stuck their rent up by £70 per month as they are due to renew. Mine stuck mine up, but not by as much. Think the principle of increasing rent when people aren’t allowed to move is quite bad.

2. This landlord who punished his tenant by removing her door

“In Narok, a woman was forced to spend the night in the cold after a landlady removed the front door of her house due to delayed rent amounting to Sh4,000”

Landlords are straight up giddy about this pandemic pic.twitter.com/EZF9Ik9igK

4. This landlord who used the police to intimidate her tenants

If Lakeisha “KeKe” Warren can teach us anything from her comments in the private FB group “Landlords, Real Estate Investors & Property Managers Hub” it’s that dollars mean more to LL than human lives.

We learn that LLs share secrets on how to get around our renters protections. pic.twitter.com/xAwJMuatDF

my apartment sent an email about staying safe during corona and ended it with “remember! you can pay your rent online!” pic.twitter.com/J9eG77ArH7

6. This landlord who destroyed his tenants’ toilet then tried to stick them with an astronomical bill

tell me why my landlord refused to hire someone to install our new toilet bc it was so easy that he could “do it himself”, but managed to fuck it up so bad that it brought our water bill to $14,190.80 pic.twitter.com/3sjqJGyBE0

7. This landlord who wanted sex from a woman who couldn’t afford her rent

One woman, unable to pay her April 1 rent after losing her income due to the coronavirus crisis, said she texted a prospective landlord inquiring about a more affordable property. He responded with a dick pic. https://t.co/GnwQfglT0l via @ambiej

8. This failure to see reason

Landlord refused to accept anything less than 100% of the rent we usually pay. In a time he knows it’s impossible to earn that rent. I’m glad we’re moving, glad we’re not giving a man like that any more money. The building isn’t the school, it’s the people in it. We’ll go again. https://t.co/wfu7f0FVyi

9. This landlord who’s removing his tenant’s ROOF for being late on April rent

A landlord in Nairobi’s Kariobangi South area has removed the roof from top of a tenant’s house for failure to pay April 2020 rent. @IAmOgutu pic.twitter.com/LRKRNbT0qf

10. This landlord who illegally checked his tenant’s government stimulus status and may face charges

Horrifying text exchange between a landlord and tenant. This landlord’s going to jail (and getting sued): pic.twitter.com/SwHMtFLOn0

Update: The Department of Justice (@TheJusticeDept) has reached out, has all the details and is investigating. The landlord probably hasn’t even seen his texts on Twitter. https://t.co/9G2OdrCG7T