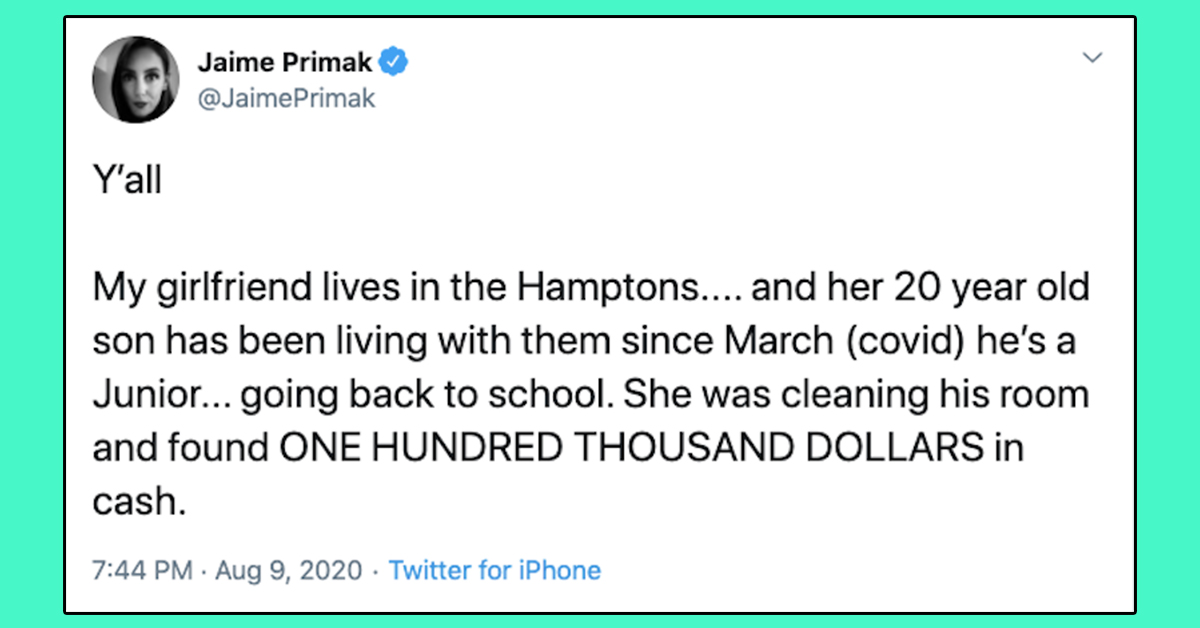 There are a lot of crazy stories circulating on the Internet, but this one is being told by a blue check named Jaime Primak who is a book author and podcast host and thus subject to more scrutiny than a Twitter account with 12 followers and an anime avatar. After reading it, I wasn’t sure what to believe.

She started with, “Y’all My girlfriend lives in the Hamptons…. and her 20-year-old son has been living with them since March (COVID) he’s a Junior… going back to school. She was cleaning his room and found ONE HUNDRED THOUSAND DOLLARS in cash.” 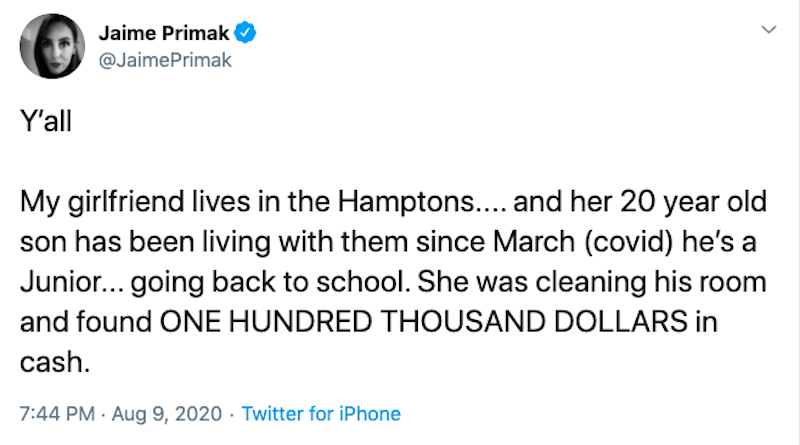 She then says that the parents of this 20-year-old of course wondered if the money had come from either drugs or theft, because what else could you think? He’s certainly not earning it working at the ice cream shop. But my mind did not leap to the actual explanation and I was SHOCKED.

Primak says the guy met an older woman at a store, struck up a conversation with her, revealed he was negative for COVID-19, and before he knew it he was having sex with a bunch of women in their 50s for money all over the Hamptons.

After admitting this to his parents they got extremely upset, which isn’t too surprising. Their way of dealing with their son partaking in sex work is pretty controversial, however—they want to give the money back.

and was relieved to be staying on the island. (Out of the city)

He said she paid for her large order in all $100s and then asked him if he needed to make some money for the summer – she and her friends were looking for a young man to help out – who was negative for Covid.

And she’s returning every single dollar and he gets nothing and is going back to school penniless.

Primak says that the mom is planning to talk with the woman who first started sharing her son’s info around to figure out how this all happened.

Y’all – she needs to make sure this story checks out…. she has a responsibility to make sure that’s really where that cash came from – some of y’all never had an Italian mom and it shows 😏

Well. A lot to unpack here.

I don’t know how I would feel if I discovered my son, who is not of legal age to drink, was being hired as a sex worker by all of my neighbors. I’d probably feel pretty bad about it! I respect sex work and he’s an adult and it’s his choice. I think the line for me is the idea of a woman I could be in a book club with pimping my child out after meeting him at the fish store. Is she the madame? Does she make a cut? Is it just word of mouth? I completely understand why this mom needs some questions answered here.

That said, I agree with most of the commenters who are saying it’s his money, and he should absolutely be allowed to keep it:

I told her to sleep on it

How is this different from Seeking Arrangement though? It was consensual, he wasn’t coerced and he is not giving free labour/is free to walk away. If he had been coerced to marry them or drop out of college, then I’d see it.

But he needs to keep his money.

He even saved it, that’s awesome I woulda been buying them shoes and bags…

He earned the money and he doesn’t seem upset in the way he earned it so what’s the problem? And so who are they giving the money to? Cops? So basically he had sex with women so the cops can send their kids to private school. I dont understand. He earned it. By consent. It’s his.

Worthy cause? Uh yeah—the college student who earned it the hard way?! 🤩

He should declare it as income. Pay taxes and hold his head high. The oldest profession in the world and he didn’t tell any lies.

His body his choice 😂 give that man his money back. I’m starting a petition this is bullshit 😂😂😂😂😂 what’s her name 👀😂

I agree. As a parent I can understand feelimg a certain way about it, but that would be my issue, not his. I might hit him up for some rent/grocery money, though 🤣

But there are plenty of people who don’t think the situation is appropriate, full stop.

Some identify too closely with the situation or have kids or siblings of a similar age. Others think that people are being light-hearted in the comments because he’s a young man rather than a young woman, and both the sex work and the theft of his money are cause for concern:

They weren’t 60 but… i agree. Always double standards.

My 21 yo brother is home from college in the Hamptons. I can’t with this story.

Me reading this story: pic.twitter.com/rxMTSiWjx6

I know I don’t have enough information to be actively incensed, or worried, and I don’t know if you yourself have been a SW at any time. But I just thought you should know that as someone in this industry, reading this filled me with something very close to dread.

And some just think it’s a straight-up lie:

Even if you allow *six months* for him to earn this money, he’d have to make around $500 a day, and I promise you, that ain’t any amount of money that a 20 y/o boy would make from women. Especially not secretly, while living with his parents. Nah.

I suppose anything is possible! But it is my very strong experience that women will give men *all kinds of money*, but they do it within the context of being in A Relationship.
Women as clients do not “consume” sex work as a product the same way that men do.

I suppose anything is possible! But it is my very strong experience that women will give men *all kinds of money*, but they do it within the context of being in A Relationship.
Women as clients do not “consume” sex work as a product the same way that men do.

There is definitely more to the story, but I kinda hope we don’t hear it. Primak has been told to not tweet about it, after all!