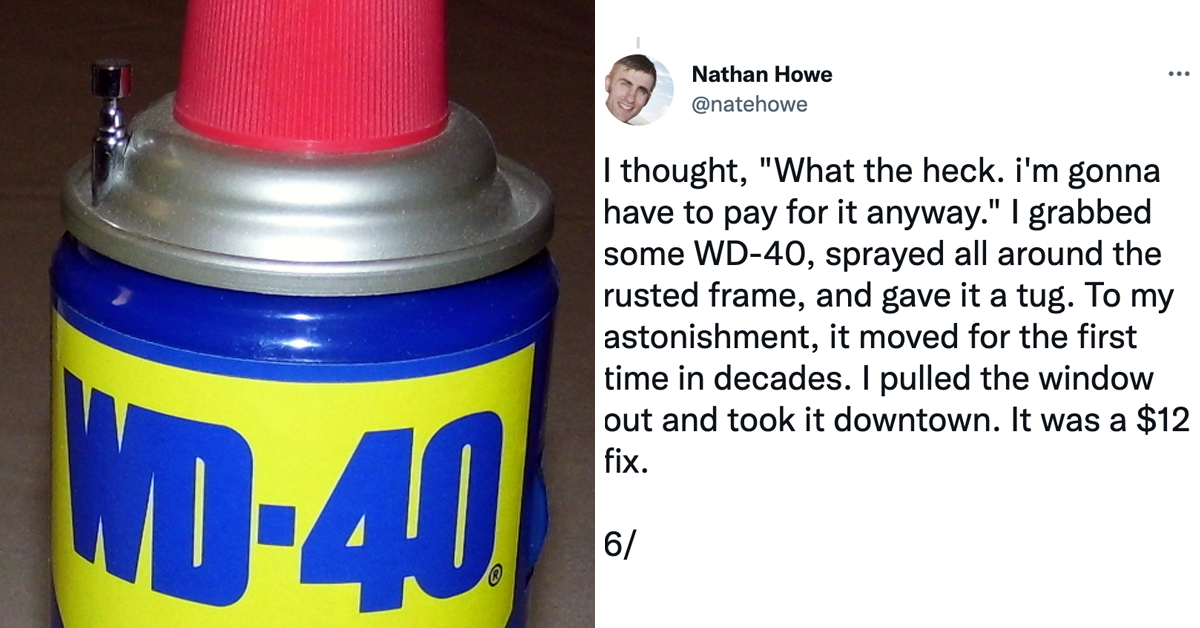 I have a few tutoring students I know I should send this to:

Procrastination, or putting off things that need to be done, is always bad. First, you can never relax when you have a thing to do on your checklist. Second, the problem ALWAYS gets worse.

Take it from Nathan Howe, who had a tweet thread about postponing a task go viral. He explains how a window-repair that never got done just got worse and worse.

Nathan starts by telling us about a broken window he put off fixing.

He got a few estimates but the cost was bonkers. So he just closed up that window.

The window repair was simply labor intensive and cost prohibitive.

So Nathan let that window be — and it drove him crazy. He knew he had to fix it, but it became a giant he couldn’t tackle.

Then his hand was forced: he needed to fix the window to sell the house. It was time.

So Nathan used some WD-40 and pulled.

And, after all that time and worry, the window came right out.

He let that window haunt him when it was a $12 problem.

He explains that this is a parable for people living with their own broken windows for years.

And that all windows are different.

He says make little steps and embrace the imperfect.

Phew! Quite the story, right? People on Twitter were grateful for the advice. One woman wrote, “Man, I needed to read this!! Thank you!”

Another shared their own rusty-window story:

Another joked that “the true moral of the story is always keep a can of WD40 around…” and I have to say that I wholeheartedly concur.

Another noted that, “Perfection is the enemy of Good Enough”. Very true.

Our philosopher friend wrote in that Seneca once said, “‘we suffer more in imagination than in reality'”.

“Great piece right there,” write in a Twitter user. “That’s not where I thought it was going but so true. I’ve let the dread of handling some things consume me to stagnation of things that turned out to be very minimal once was thought about Let God Let Go,”

Another laughed, “If Jesus had ADHD this would be in Proverbs.”