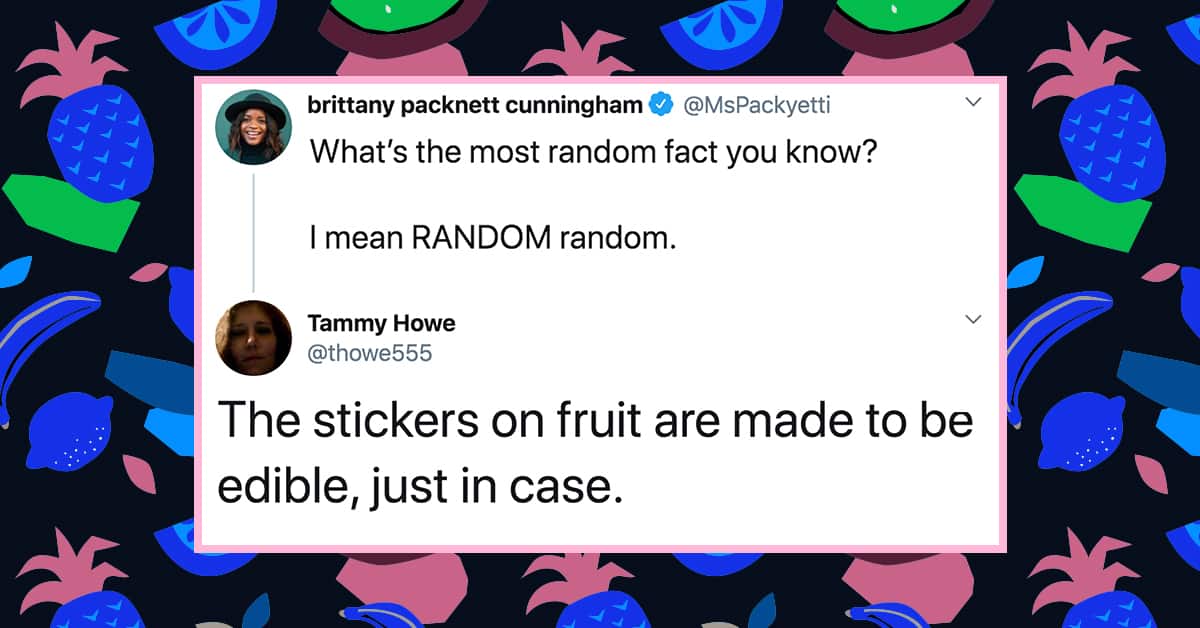 There is too much in the world to know, even the really, really important stuff. That’s why it’s so crazy that often the most unimportant stuff tends to get stuff in our heads, useless, random facts that have no purpose nor any reason to be shared. Until now.

Writer Brittany Packnett Cunningham asked her many followers on Twitter to share the most “random fact” they know and she means “RANDOM random.” Since she has a wide audience, that cast a wide net. The facts came rolling in. And they are RANDOM.

What’s the most random fact you know?

Now, none of these facts have been fact-checked by me, so consider them a jumping-off point for your own research. Or you can store the random fact in your own brain and keep repeating it over and over to whoever will listen without knowing if it’s true or not. I think a lot of them if not all probably are true, either because I have heard them before or because they’re just too weird to be made up.

Life really is this random.

Koalas are really really not smart.
If you change the form of their food (put eucalyptus on a plate, for example) they will starve to death rather than eat it bc they can’t recognize it. https://t.co/732YnZKErZ

We live closer to when T. Rex lived than T. Rex did to when Stegosaurus lived. https://t.co/f4UVS5dh10

He is suddenly a much more distinguished duck than I ever gave him credit for. pic.twitter.com/gXkeQQM7Ke

When you look at a flower, some of the photons that entered your eye just ended a 100,000-year journey from the center of the sun.

Nobody else sees them.

10% of THOSE will give up their energy to cause a chemical reaction that—literally—makes them a part of you. https://t.co/LK339c4jym

The act of touching glasses to cheers comes from medieval suspicions of poisoning each other, so youd slam mugs together to spill each others drinks into your own to show trust you werent trying to kill them. Europeans man…

they can’t ever close Elvis’ estate unless it stops making money, because he died without a will. there’s a captive law firm that does nothing but Elvis law as a result. https://t.co/Dc3AXWQ9YQ

If you’re ever commiting fraud and need to fake a series of random numbers, have a computer generate them. Humans are really bad at doing that, and a statistical analysis will usually reveal it easily. https://t.co/psqFi8ZaFq

And the wool quality is higher if the sheep are castrated (not sure if that’s true for humans) https://t.co/1h5mnWBPKm