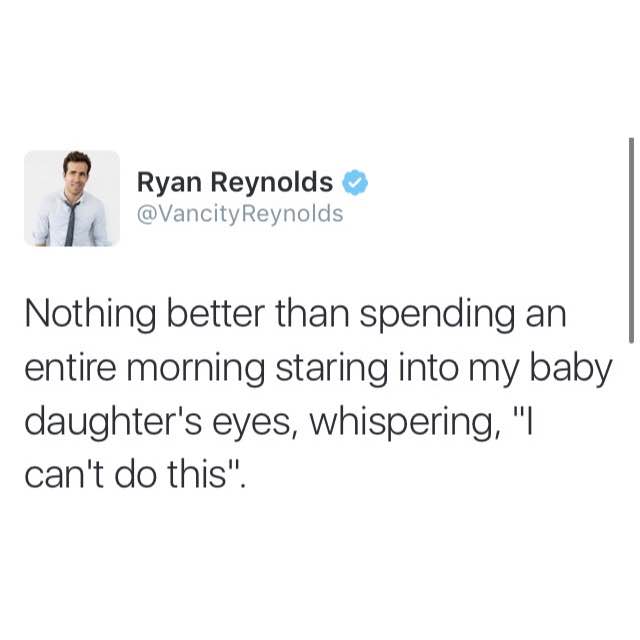 Ryan Reynolds is one of the greatest human beings on the planet.

I actually have no way of  knowing if he’s one of the greatest human beings in his private life.

For all I know, he kicks puppies and yells racial slurs at toddlers.

But his tweets are fucking hilarious and that’s all that matters to me because I’m shallow.

Please enjoy some of the best Ryan Reynolds tweets that have graced the public on Twitter.

Nothing better than spending an entire morning staring into my baby daughter’s eyes, whispering, “I can’t do this”.

Happy Mother’s Day, Mom. Painfully, you gave birth 468 weeks late. I was 9. We were both so happy to be free. pic.twitter.com/B7TDWRuWUe

Whoever invented pants probably brings it up in like, every conversation ever.

The great thing about kite surfing is that – depending on the wind – you can continue kite surfing up to an hour after dying.

As I soon understood, fly fishing had nothing to do with pulling a trout out of your pants to surprise your brothers. pic.twitter.com/BGzjSGtSFi

Tip: It’s important parents take little “time outs” for themselves too. Even if you feel pretty guilty when you return 14 years later.

Intimidating? Sure. But “Sex-Thirsty Online Predators” is a terrible name for a softball team.

I’d walk through fire for my daughter. Well not FIRE, because it’s dangerous. But a super humid room. But not too humid, because my hair.

I’m teaching my daughter that the sun goes down each night because it’s mad at her. Probably gonna write a book on parenting at some point.

Dressed my lazy, 10 month old daughter as Newt Gingrich for Halloween because all she needed was the tie. pic.twitter.com/8elDoaQB7Q

I love Words With Friends. Because once you start playing, the next time you look up, another Olympics has come and gone.

The Deliverance theme song is way scarier when you make the banjo sounds with your mouth. It also helps if someone else is in the elevator.

The taxi driver switched off Adele — mid song. Either his life is perfect, or he has three days to live. No middle ground there.

Ever notice halfway through a shower, that you’re not in the shower at all? Just crying super hard? #HappyCanadaDay

And on the other end of the Twittersphere, is this: My Friend Only Ever Uses Twitter To Complain To Companies And It’s Hilarious.