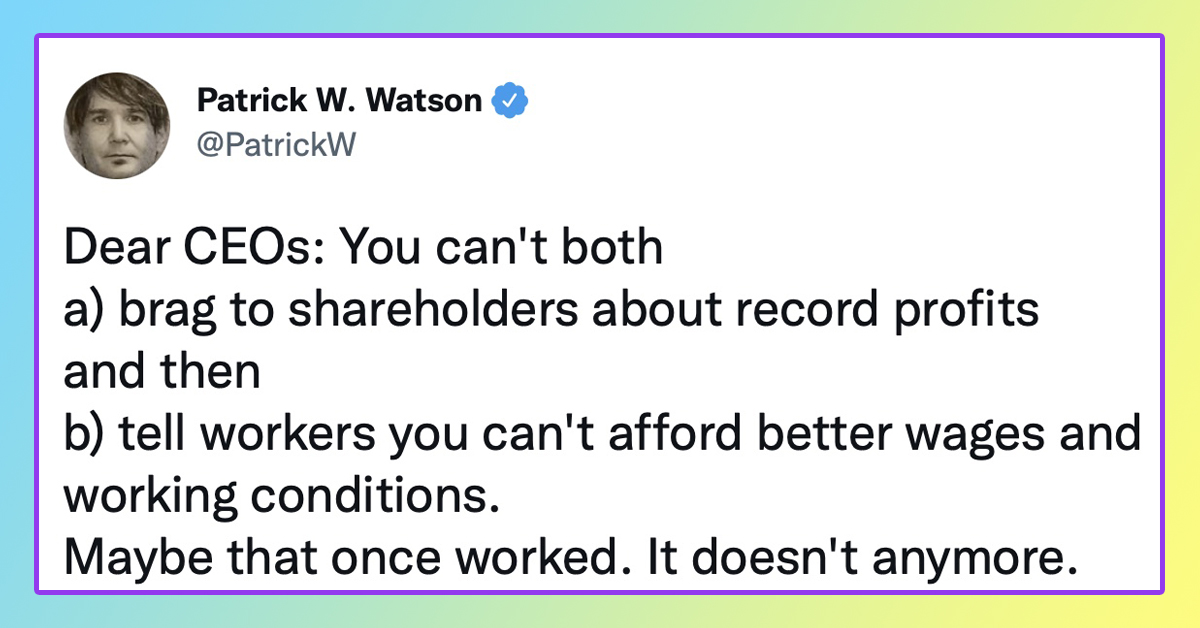 We live in a time of pretty horrifically stark divides between the rich and the not rich; the wealth gap is enormous. CEO pay, according to the Economic Policy Institute, was 351 times as much as an average worker in 2020. That’s insane.

So it probably isn’t a huge surprise that people are pretty fed up with billionaires and other wealthy CEOs. The inequality is just… too much.

Economics journalist Patrick W. Watson called out the hypocrisy and people glommed to the tweet.

Check out some of the responses below:

My boss literally did this at the end of the year: “We projected 10 million in revenue and we cleared 12 million!” Immediately became “we appreciate all your hard work and everything you do, but we can’t afford to give you a raise that keeps up with inflation.”

My work told us that they had a record year in profits. So they were going to share a piece of the pie with all of us. And then they brought out actual pies. Actual f**king pies so that they could share a ‘piece of the pie’. If I wasn’t so poor I would’ve quit right then and there.

Reminds me of the end of 2021 when my director told me she couldn’t approve the maximum raise for a third of my staff, who met all performance criteria. She said it would get flagged by corporate. Turns out she was the final approver, corporate doesn’t question her performance ratings at all. Thank God I called her bluff and will be able to give out some nice raises this year.

My work does it all the time

“we in a good place with covid, thr company is making 50 million profit a month”

“sadly the legislation has changed amd now we have removed 70% of your paid sick days, didnt have to… Just make more money”

My favorite was telling the employees themselves how great our profits are, then performance reviews came around and suddenly they can’t afford raises.

My coworker was furious when the news drop that our company has had the best profits ever and yet just a week prior to he was denied a raise because “we can’t afford to.”

7. Why does everyone have the same story?

The best part is when they brag about record profits so you look at the publicly available financial statement and see that 30% of those profits are because they cancelled raises and staff costs didnt rise as expected.

Yes they usually list how much they expect to increase staff pay. So they factored in raises already but then cancelled them and bragged to staff about taking that money away from them and making it as a profit that went to giving executives a 50% bonus on salary…

I’m from Europe and the current company i work for started 4 years ago. They had the investment capital for a quick start and the revenue generated is as follows, roughly

Wages are the same as they were whey the company was operating at a loss in its opening year.

My company just pulled our covid sick pay yesterday and we’ve posted record profits for 8 quarters in a row.

My previous CEO asked where I lived and when I told him he responded with why I didn’t live closer to work. I told him that he didn’t pay enough (one of the most affluent neighborhood in San Diego). Moron had the surprised Pikachu face but I knew he knew. F**k that guy.

I think it was pretty hilarious when my husband’s company told him he couldn’t get a raise because they can’t afford to do raises right now while simultaneously telling their shareholders that they had a record year of profits have over 10 million in the bank and giving out a 2.5 million dollar shareholder payout.

Then after they had a mass quitting they decided to up the pay what they claim will be a 5% raise. But when you sit down and do the math it actually is less than 2%. So an extra $20 a week on average. But still puts them about $500 a week behind their closest competitors pay rate. But they don’t understand why everybody’s leaving.

My boss would do this. I worked at a privately owned daycare. They had 3 locations. My boss would brag online about buying Gucci with her daughter, and she would buy new cars all the time, but then would say she can’t afford to give us raises or benefits because she is “already in debt from using my own money to pay your wages.” She would also call us stupid and say we don’t deserve to make $15 and hour. Heck she even hemmed and hawed about the government forcing her to give us paid sick leave, and tried to make it so we had to give 2 weeks advanced notice to use it, and that it was only for medical emergencies.

Sounds like the place I used to work. They announced record Q1 profits in 2020 due to COVID driving demand for their product through the roof. Then on the very same call they announced they were reducing 10% of their workforce because “other manufacturing companies are downsizing due to the pandemic and it would be a disservice to our shareholders if we didn’t do the same.”

I worked for a small company that once cancelled the Christmas bonuses and raises because of the collapse in 2008. The company was still millions in profit. We only had about 40 employees. The last minute the owner decides he wants to take us out to Chinese for a Christmas dinner. The day of the dinner in a meeting with about 15 workers, he plays a slideshow of his recent vacation to Peru after the financials. He said, ”here’s where we took a plane tour”. All of us couldn’t believe how disconnected and his lack empathy. I left shortly after for a job making twice as much in a different field. He showed up at my job months later to see if I could get him a discount on his car repair at another store, my store owned…

Insurance company I used to work for (Unitedhealth Care) a few years ago announced no real raises (base 1% or something) for the 3rd year in a row. Couple weeks later it was announced that they had record breaking $4B quarterly PROFITS. They had to send out an email to the company saying it was not “real” money they could give out to employees.

My company made 6 billion or so during the last year. $100 bonus.

I still remember when I worked for an insurance company and they didn’t have enough phones to go around so some of us were told to use our own cell phones. The day before that they were boasting about how much they made the previous year and so I said out loud how come a man that just pocketed 25 million last year can’t afford to buy a few more phones for HIS business. I didn’t work there much longer.

This reminded me of my recent company townhall that proudly claimed they recorded a record annual revenue and breakthrough to new markets in sales. Then the next week during my 1-1 with manager i asked for a raise due to company profiting and my performance. He said “you did well but it isnt well enough to warrant an increment”

This just says I can pay you more but choose not to so that people with too much money can make more.

The first dealership I worked at the owner handed out $0.50 raises, same as every year. When I asked why it wasn’t more if I was doing such a great job, they said the company was right on money. Then the owner showed up in his new $150,000 corvette C5 that he had custom made to look like a C1 vette. Thing was ugly as hell too.