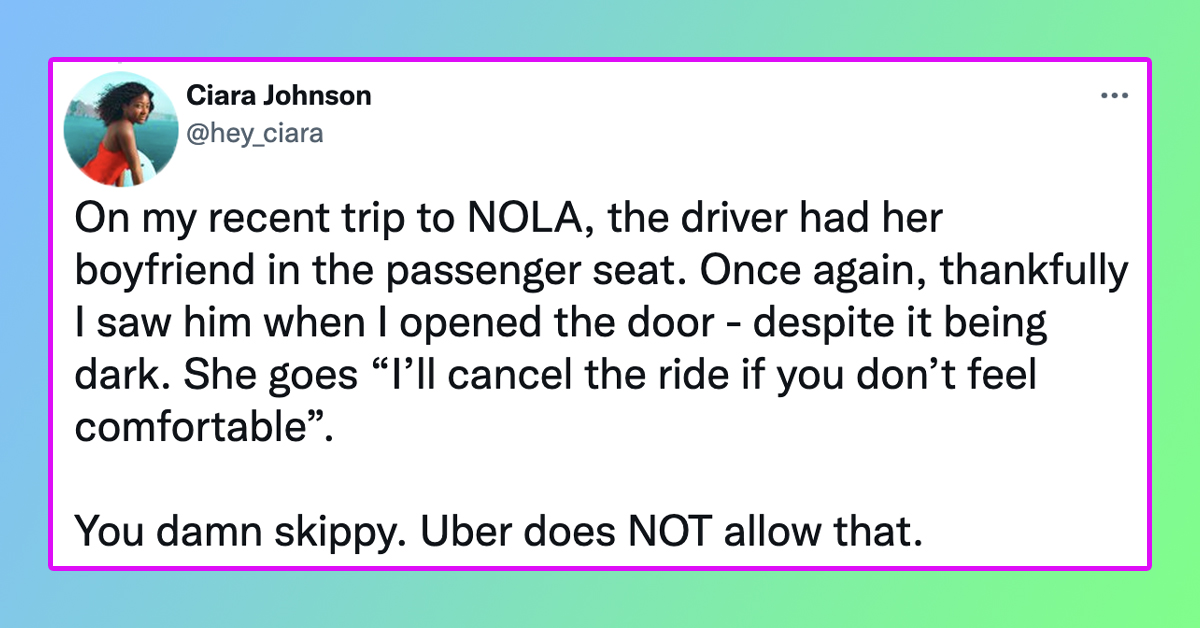 A woman’s warning about staying sharp when it comes to rideshare services is going viral after she shared a personal story on Twitter.

Ciara Johnson (@hey_ciara) explained an incident she had after ordering an Uber at the airport recently, urging ladies in particular to “ALWAYS check the license plate before getting into an Uber.”

She was in a rush at the time and says she put her suitcase in the trunk of a car that happened to be the same make and model of the Uber that was scheduled to pick her up. Fortunately, at the last minute, she checked the license plate — and realized it didn’t match.

“He says ‘I wish it wasn’t the wrong car,’” Ciara recalls of the driver.

Fortunately, her real Uber pulled up as she got her things out of the trunk. But after she got into his car, he had his own words of warning to offer.

“I tell my Uber driver what happened & he says this happens often. Men drive around and hope women won’t pay attention,” she wrote. “Thank GOD I was paying attention enough to check the plate to get in the car. And the guy was so seemingly nice. Didn’t ‘seem’ creepy at all.”

But despite how things seemed, Ciara said the original guy drove off as soon as she got into her real Uber, suggesting to her that “he wasn’t actually there to pick anyone up.”

“I can’t help but wonder what would have happened if I got into that man’s car and wonder what his motive was,” she added.

After her own nerve-wracking experience, Ciara had some tips for anyone else planning to use Uber, Lyft, or any other app-based rideshare service.

“Check the license plate before entering the car. Ask the driver who they’re picking up. Don’t say your name. Wait for them to say it,” she wrote.

She also suggested sharing your trip progress with a friend from the app, double-checking the driver’s profile photo, and reminded folks that in some instances, Uber now has drivers request a pin from the passenger before they can start the ride.

After the thread went viral on Twitter, Ciara, who runs a travel blog, shared additional tips for women who want to travel solo and do so safely.

But her main advice? “[T]rust your gut and stay aware — whether you’re at home or traveling. People are crazy.”