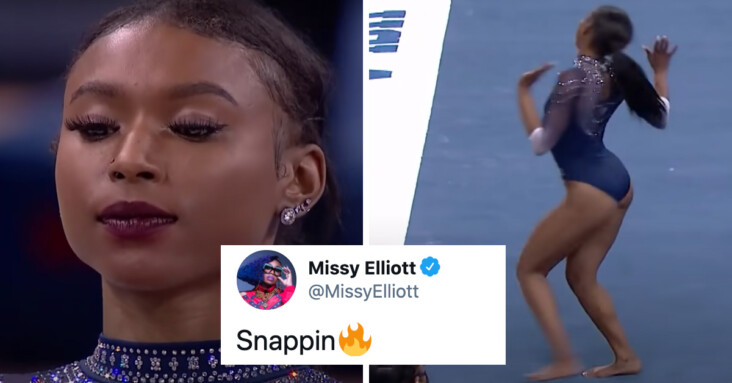 On Saturday, senior gymnast Nia Dennis helped bring UCLA to their win of 196.15 to 195.95 against the Arizona State Sun Devils, according to Mashable.

Dennis is receiving wide acclaim for her incredible floor routine, on which she earned the highest score awarded by judges that day at 9.95.

This is what #blackexcellence looks like. @DennisNia does it again! 🔥

It got so big that even Missy Elliot noticed it:

She got a shoutout from Olympic gold medalist Simone Biles, who tweeted about how much fun it was to watch Dennis do her thing out on the floor:

okay @DennisNia do the damn thing girl 🔥 this was so fun to watch! keep killing it! https://t.co/eDntwMpC4R

Dennis told the Los Angeles Daily News that she wanted the routine to feel fun and personal.

“This routine definitely reflects everything that I am today as a woman,” she said. “And of course I had to incorporate a lot of parts of my culture. I wanted to have a dance party because that’s my personality and of course I had to shout out LA because we out here, UCLA.”

Other UCLA Gymnasts including Katelyn Ohashi recognized how amazing the results were on Twitter as well: