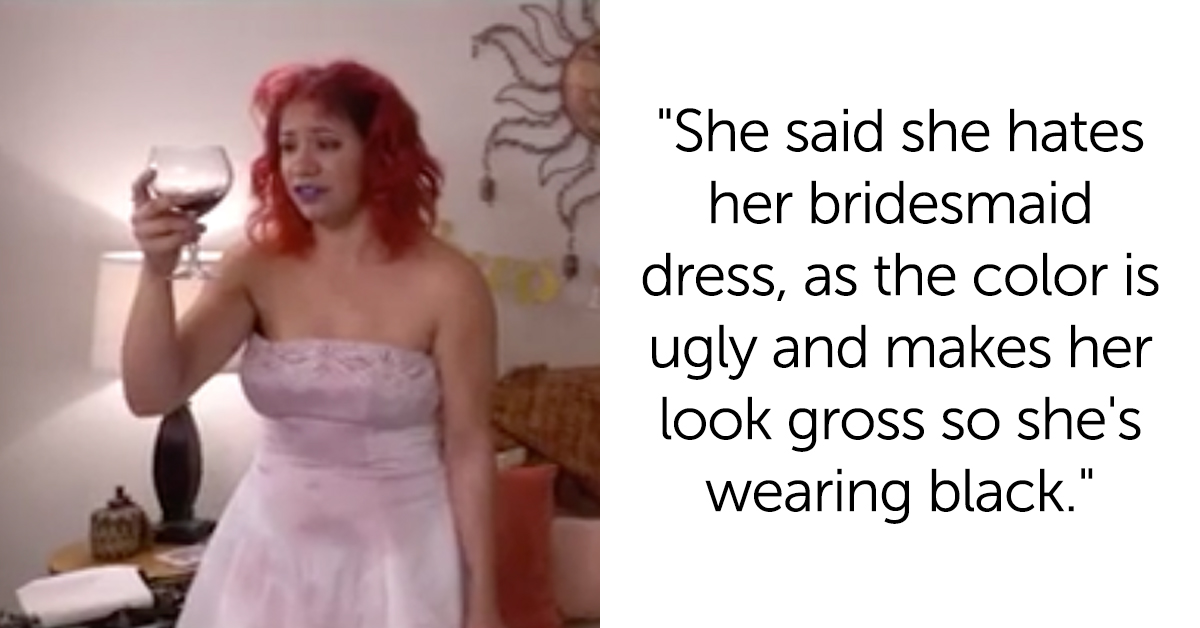 Ah, wedding colors. Is there anything less significant in the grand scheme of the world? Probably not, but hey, let’s ruin friendships over it!

I’m not just ragging on the bride here either; the friend should have known that this was a dumb hill to die on, even if u/bridezillaxoxo in this AITA story was wildly wrong and picked a color that wouldn’t have looked good on everyone.

Here’s the story of a bride who booted a bridesmaid — you tell me: was she a jerk?

My (23F) wedding was back on Saturday December 31st and I’m still getting backlash from this, so I want to know if this was an AH move.

OP lives in a wintery place and her wedding was on NYE (already a dick IMO). She had a color theme of forest green and gold.

In the country I live in it’s currently winter, and we get a fair amount of snow so my wedding was a winter themed wedding. The color theme was forest green and gold. My dress was obviously white, and I chose the color of my bridesmaids dresses to be forest green as well. My MOH”s dress was black, and everyone was to wear gold accessories.

One of the bridesmaids didn’t like the green hue and said it wasn’t flattering. OP said no thanks.

I have this friend, we’ll call her Kat, that I asked to be one of my bridesmaids. When we went dress shopping and I told them the color theme I was going for, Kat immediately expressed that she thought forest green was a bad choice.

The bridesmaid learned that the MOH’s dress was black and wanted to also wear black. OP said no, because again: color schemes are more important than your friendship!

She said the thinks it’s not a flattering color, and thought I should choose something different and more “girly”. I said no because my wedding was winter themed and I thought the color would go perfect with the theme. She suggested a pink, blue even a red. I said no, but thanks’ for your opinion. She found out my MOH”s dress was black and asked if she could wear black too? I said no, only my MOH is wearing black.

I paid for all the dresses.

OP paid for the dresses, which is an important note. When the wedding day arrived, the bridesmaid had a — she claimed — spare dress for the reception.

Fast forward to wedding day, everyone’s getting their hair and makeup done and Kat show’s up 30 minutes late holding a bag that looked like it had a dress inside. I asked her what this was for? She told me it was for later on at the reception if she got uncomfortable and wanted to change after pictures. I was like ok cool.

When the bridesmaid came down for pictures, OP learned she was in black. The maid of honor tattled on the wayward maid and OP confronted her friend.

So fast forward we’re all dressed and walking down the stairs because the ceremony is beginning in 30 mins and we were going to take some pictures before. Kat is the last person to come down and she’s wearing a BLACK DRESS. At the time I was preoccupied taking pictures with my parents, but my MOH came over to me and made me aware of the situation.

Kat again said she was not comfortable, the color was awful, and she wanted to wear black. OP told her to change, Kat said no, and OP told her she would be removed from the wedding.

I confronted Kat and asked her what was going on. She said she hates her bridesmaid dress, as the color is ugly and makes her look gross so she’s wearing black. I told her please go back and change. She refused and started walking away from me. I said I’m going to ask her one more time, and if she doesn’t oblige I’m calling security and kicking her out. She began yelling at me to fuck off, so I called security and asked them to please escort her out. She started making a BIG scene yelling how I’m such a bitch, that I can’t force her to wear anything and that I’m a horrible inconsiderate friend.

That friendship certainly ended. Hope OP likes the stupid photos she got out of it.

The wedding went on and it was truly amazing.

Ever since the wedding Kat has been blowing up my phone with texts saying some really nasty thing’s and asking for the money back she spent on the black dress, since it was a waste and she didn’t get to wear it. I had to block her number. Some of my other bridesmaids have been giving me shit saying that it was a little harsh kicking her out and embarrassing her like that. And that maybe I should give her the money back. AITA for kicking her out?

Reddit wound up voting NTA but I gotta say: everyone involved is a dick. Period.

“NTA – it is your wedding. IF she didn’t want to wear the color that you chose she could have easily politely backed out and said she would love to attend as a guest but wasn’t comfortable wearing that color. You also paid for the dress not her where many would complain that they are buying a dress they will never wear again…you purchased it,” said someone.