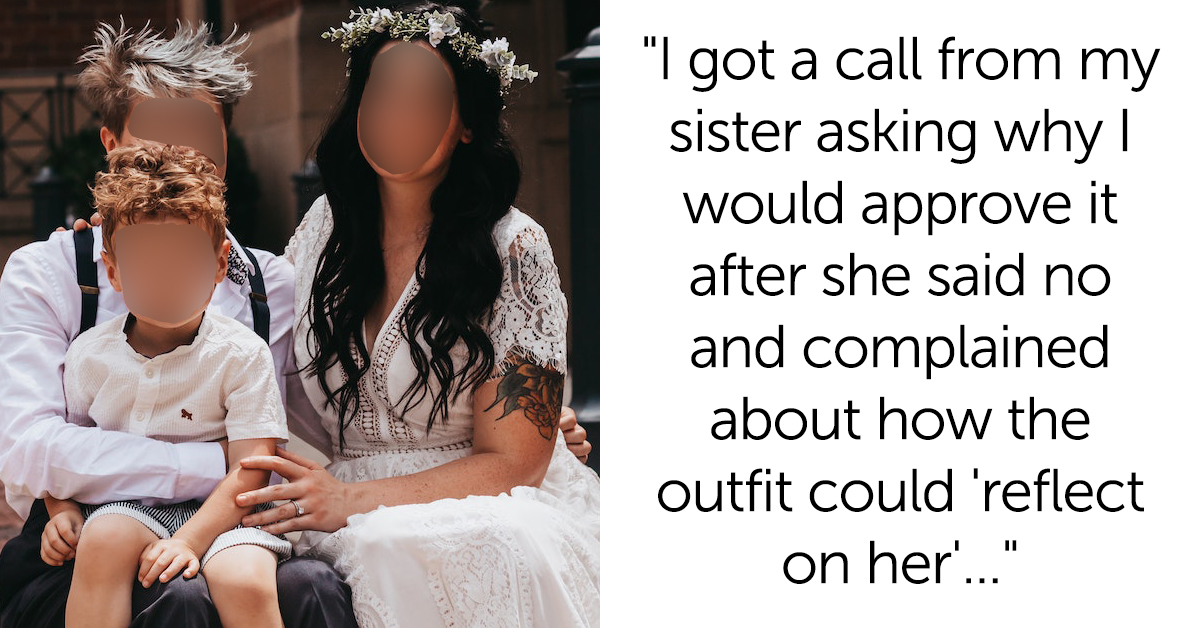 Parenting is one of those things you just don’t stick your nose into, which is what u/trincolls learned over the weekend when she posted to AITA wondering if she was wrong to “overrule” her sister by approving her nephew’s outfit.

She explains that she and her fiancé are getting married in April – wedding planning is underway!

My fiance (M27) and I (F27) are getting married in early April. We are planning a big wedding with the help of both of our parents’ financing. We invited all of our friends and family, including our siblings and their kids. My fiance and I are very excited for our wedding.

The wedding’s dress code is fairly laid back: just general “fancy”. They want people to be comfortable and feel good.

When it comes to the dress code, me and my fiance are very laid back, we just want people to dress up in either a suit, dress or something else “fancy”. We couldn’t care less about the color or design and actually encourage our guests to dress creatively, colorfully or over the top. Me and my fiance are both creative people, I’m an art teacher and he works in advertising. We want people to express themselves and while we are okay with traditional color wedding outfits, we only want them being worn if it is truly something our guests like.

OP has a huge family and is close to all her siblings and nieces and nephews.

I have many siblings, and many nieces and nephews. My oldest sister and her husband (F40 and M40) have 6 kids (F15, M14, M13, F11, M7, and F3). I still live close to all of my siblings, so me and my fiance have a close relationship with them and know they are excited for our wedding.

One of her nephews is 13 and really hates dressing up in a suit. OP’s sister called to explain the issues and OP talked to her nephew.

My 13 year old nephew is a good kid, has great grades and is the athlete of the family. As with most middle school boys, dressing up in a suit isn’t exactly his favorite thing to do, and about a month ago, my sister called me telling me he was giving them issues when suit shopping, I sat down with him and had a talk to see if everything was ok, he said he didn’t like anything he saw, and I told him to ask his friends for advice.

The kid came up with a “sports themed” suit and told OP that his mom said no. OP and her fiancé, however, said it was fine.

About a week after, I got a text from my nephew asking what he thought of his outfit idea, he wanted to go with a sports theme, he wanted to wear a normal dress shirt and pants, but for his blazer have his favorite NFL team on it, a lacrosse tie and baseball cufflinks. He found all of this online and sent links. He told us his mom said no and then asked my opinion on it, I showed it to my fiance and we both agreed it was acceptable and we would love to see him in it if that’s what made him happy.

OP’s sister called her and was angry about the suit idea and about how OP was basically overruling her. OP took the nephew and her sister to lunch to sort it out.

A few hours later, I got a call from my sister asking why I would approve it after she said no and complained about how the outfit could “reflect on her”” and how my nephew needed to learn “proper wedding attire”. I asked her and my nephew out to lunch the next day so we could settle it out.

After the lunch, OP’s sister did agree to buy it — but she remains upset with OP and other siblings agree that she overstepped a boundary.

We went out to lunch and my nephew and sister was explaining how his friends recommended it and how he wanted to express his love for sports, after explaining to him that this isn’t normal wedding attire, but fiance and I wanted people to be creative, my sister agreed to buy it, and just got all the stuff in the mail and he loves it.

My sister is still upset at me for trying to “overrule” her parenting, and when talking to one of our other siblings (M38) he agreed with her that I overstepped my boundaries. Fiance and I are just happy nephew found a nice outfit he likes.

So who is wrong here? Here’s what Reddit said:

One person said, “I get that your intentions are good, and even the underlying idea of kids being able to express themselves through clothing. But you’re missing the fact that this isn’t just about you or your wedding.”

Another noted that OP was played by the kid. “I get that you’re fine with the outfit but he asked his parent, they said no, so he triangulated and went to you. Kids often do this between their parents to try to get their way. Mom says no so they go to Dad or visa versa. Parents have to be aligned and support each other. Else it sets up a pretty manipulative dynamic.”