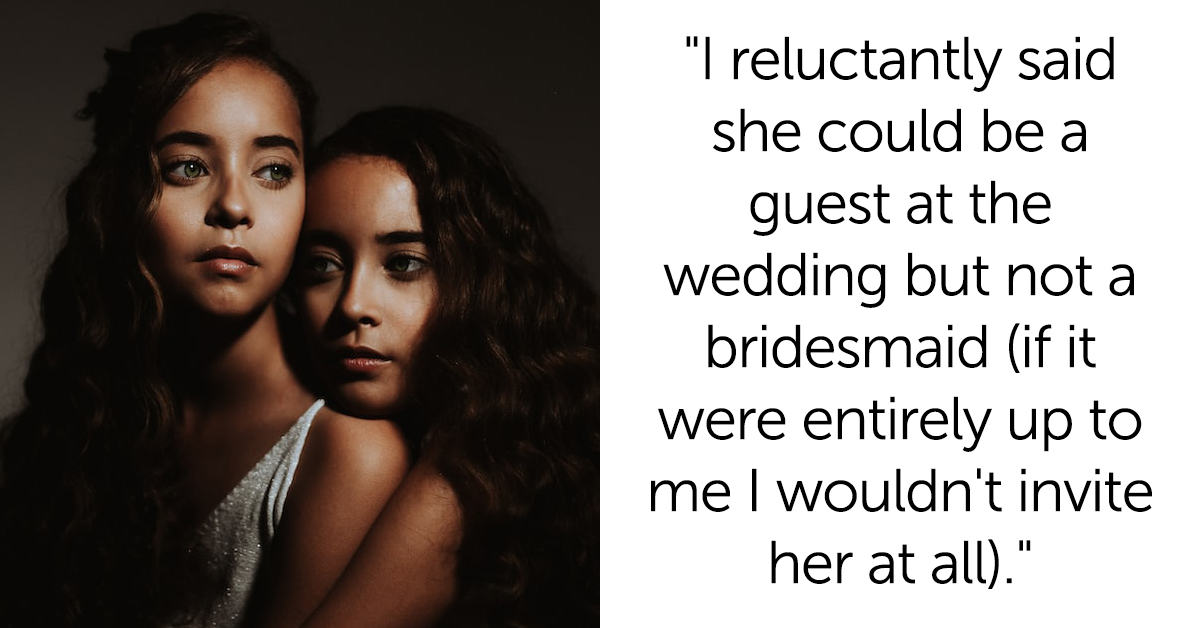 Imagine a relationship this soured. I mean, yikes. Because bridesmaids are a traditional part of weddings, serving as a support system for the bride and playing an important role in the ceremony. Usually, they include friends, SISTERS, and other close female relatives.

But not for u/AdAgitated1763, who wants to know if she’s a jerk for not including her own twin. Let’s read on.

OP explains that she and her sister were close until high school, at which point her twin ditched her.

I (25f) have a fraternal twin sister and am getting married next fall.

We were very close growing up until high school. She was an outgoing bubbly cheerleader and I was a shy nerdy bookworm, so she ditched me for the popular kids.

The twin did nothing to help OP while she was bullied and treated her, well, badly. Again: high school.

She didn’t actively pick on me but she’d stand by with her head down and do nothing when they bullied me. She would talk to and hang out with me at home as if nothing was wrong but when at school or at the mall where kids at our school we’re likely to be seen she didn’t want to be seen with me.

At sixteen, the girls had a big party but OP didn’t really want to try to host anything. Her sister, instead of including her, gave OP money to not go to the party.

When we turned sixteen she had a big bash but I didn’t have any friends so didn’t want to try and have a party, our parents were making her include me but she discreetly offered me $100 to pretend I was sick, I took the money bc I really didn’t want to go to a party where I’d at best be ignored or worse picked on.

OP ignored her sister through college and kept her at arm’s length.

We went to separate colleges across the country from each other, she tried to keep in touch but I ignored her because i was very traumatized at losing my sister/best friend. I would be polite to her at home during school breaks but kept her at arms length.

Now, 10 years after high school, OP is still traumatized by her twin’s high school behavior. She does not want the twin to be a bridesmaid.

Anyway I don’t want her to be a bridesmaid (let alone maid of honor, my parents thought it’d be a good “compromise” to have her just be a regular bridesmaid). My “big” from my sorority will be my MOH and my fellow “littles” who had the same big will be my bridesmaids.

RELUCTANTLY, Jesus, OP invited her sister to the wedding.

I reluctantly said she could be a guest at the wedding but not a bridesmaid (if it were entirely up to me I wouldn’t invite her at all but that would cause more drama in my family than it’s worth).

The sister, for what it’s worth, has also never apologized for her teenage behavior. She should.

I told them “but what would other people think if she was seen with me?” She cried (she never apologized, she just thinks bc it was so long ago I should let bygones be bygones because she was young and immature) and my parents agree with her.

So is OP wrong here?

But I had to be in therapy for years because of her, why should I have someone as a bridesmaid who thinks they’re better than me?

I mean, I guess not. But this all seems like something that can be forgiven if both parties want it to be. OP can decide to let sh*t go. Her twin should absolutely extend the olive branch.

Reddit voted NTA and I agree, but it does seem strange that there’s no damn solution here. Fortunately, Redditors offered OP some great ideas.

One user wrote out what OP should say:

“I agree that you were young and immature. And you still are. If you actually felt bad about your actions, you would be sorry about the pain they caused me and you would be happy to apologize. Goodness knows there are things from my own past that I’m ashamed of and I’ve apologized for… If I thought any of my prior actions were still causing someone pain, I would do my best to make it right. You disagree. That’s fine–you are an adult and can make your own decisions. But that means we don’t share the same values. And if we don’t share basic values, why would you even want to be my bridesmaid? How do you think you can be supportive to me in my future life if we can’t even agree on the basics? Regardless, I’m done having this conversation: you are not close enough to me to be a bridesmaid. Anyone who knows us will not be surprised by this. Anyone who is surprised by this, doesn’t know us well enough that we should care about their opinion.”

NTA. The people standing next to you on your special day should be the people you feel supported by.

Another said, “Nta, honestly if you are in therapy be strict with your parents and tell them she is uninvited. Is it really worth it to have someone like that on your happyest day yo date? Imo just use your shiny spine and offer her 100$ to say she was sick and not come.”