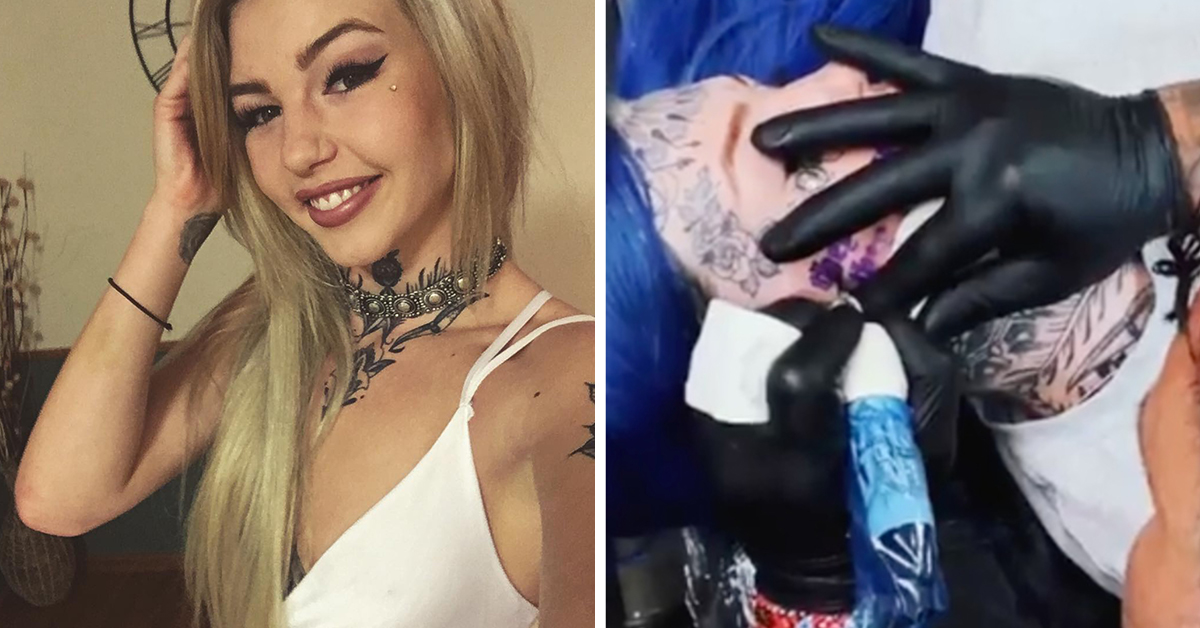 Instagram model Amber Luke is famous for her 100+ tattoos and striking body modifications. But it’s her newest ink that seems to be generating a bit of controversy online, according to viral content website VT.

Luke, who has dubbed herself “Blue Eyes White Dragon,” revealed her latest design—a giant quote tattoo on her right cheek that reads “they come they go”—to mixed reviews on Instagram.

The quote isn’t Amber Luke’s first face tattoo, but it does appear to be one of her largest facial inkings to date.

Luke, who works as a body piercer, got her first tattoo as a teenager. Since then, she’s spent roughly $25,000 on ink and other body modifications, including a tongue-splitting procedure, vampire fangs and blue tattooed eyeballs.

“Back when I was 14, I didn’t know who I was or what I wanted from life,” Luke told Inked magazine in May. “I was catatonic and couldn’t see what was best for me. I was naive. But I now have a backbone and I can stand up for what I believe in.”

Needless to say, Luke’s appearance has changed significantly since she first started her transformation.

Luke explained the significance of the “they come they go” quote in her Instagram caption:

“This means a lot to me. So many people have walked out of my life when I needed them the most—so many people I loved with all my heart decided to break it into thirds,” she wrote. “I’m a strong person. But goddamn, it hurts. This is to represent all the positive moments I had with those now strangers.”

However, some negative reactions to the new ink led Luke to amend her original caption, letting everyone know that “any negativity will be deleted and you will be blocked,” according to VT.

Most of her 124,000 followers expressed admiration for Luke’s face tattoo and overall body art, haters be damned.

“You are an inspiration on so many levels,” one fan wrote. “Keep on doing you and shining bright! You rock.”

Another follower praised Luke for not apologizing for her life choices.

“You’re such an inspiration and it’s not because of the tattoos (even though they’re fricken amazing art),” they wrote. “It’s because you’re not afraid to be who you are, you’re so damn strong and you don’t apologize for not fitting into society’s norm and I fucking love that. Thank you for being you.”

Luke fired back at critics earlier this year in an interview with Daily Mail Australia.

She weighed in on how the public reacts to her dramatic look.

“I gained a lot of support and positive vibes from complete strangers,” Luke told the tabloid. “There was always the few nasty opinionated ones who try to make you feel inadequate, but I never let them get to me. [To the trolls], if you’re reading this and you have nothing nice to say? Don’t say it at all. You never know what a person’s going through in their personal lives, be kind.”

Regardless of how you feel about Luke’s face tattoo, that’s a life motto anyone can get behind.