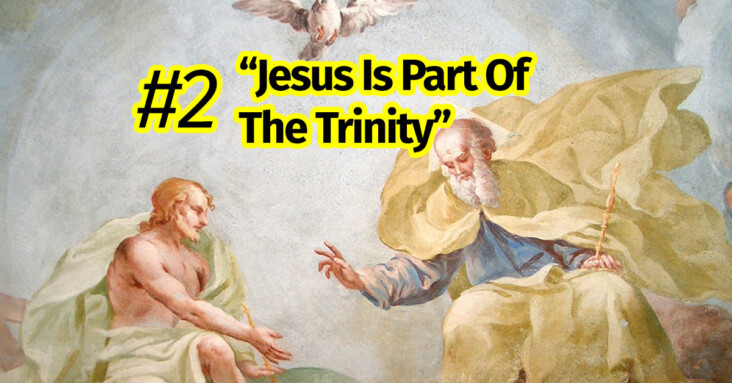 Jesus said many worthwhile things. “Peace to all my haters” was not one of them. Well, he did sort of say that. Jesus Christ, for those of you who don’t know him, is the reason for the season (around Easter and Christmas). He was the Messiah promised by the Old Testament, and He ushered in the new one.

If you’re Christian, that is. If you’re not, he was either a really great guy who wanted us to be nicer to poor people or an unrighteous pagan Sun deity who started the Illuminati or something.

Much of what Jesus said and did is misattributed because the people who actually wrote down his words and deeds didn’t do so until at least 80 years after his (first) death. The reason they didn’t write it down was because he said he’d return, and everyone thought that meant like… next week or so? Unfortunately, he hasn’t come back yet. When he does, I’ll be here writing about how the Rapture went (I will be one of the ones left behind).

Ask any Christian what they believe Jesus said, and you’ll get some mixed messages. Did he say divorce was wrong? Yes. Was he ever married? No. That makes him the worst kind of friend. Let’s check out some of the other things he did and didn’t say.

Here’s what Christians believe about Jesus even though it’s not in the Bible:

1. Jesus was born in a stable.

Actually, according to theologian Rev. Ian Paul, “The New Testament hardly even hints that this might have been the case.” The family wasn’t even denied access to an “Inn” per se. Most houses had a guest room for people to stay in and a separate room for animals. The guest room was full so the couple went into the room with a bunch of straw. The baby Jesus was in a manger, yes, but he was surrounded by his family in a room in a house where animals slept.

It’s fine to believe it, but it’s not technically in the Bible and wasn’t adopted by any Christian faith for several centuries. The word “trinity” itself is nowhere in the Bible. Jesus does talk about himself, the Holy Spirit, and God the Father, but because the Christians were a monotheistic religion, they had to do some finagling with the 3-in-1 God.

Jesus Himself said in Matthew 5:17: “Do not think that I have come to abolish the Law or the Prophets. I have not come to abolish them, but to fulfill them.” Jesus also didn’t come to “bring peace but a sword.” He didn’t mean that he hated peace but he was extremely self-aware about what his presence would mean. The same goes for the Hebrew Scriptures. He knew people would be confused by all these footnotes he was adding to the religion, so he made a point to say he’s fulfilling the law of Deuteronomy 6:4: “Hear, O Israel: The Lord our God is one Lord.”

3. The Anti-Christ is a real being who will bring the End Times.

This is some straight up Harry Potter-level stuff. The idea of a single “antichrist” is apocryphal. John mentions the term “anti-Christ” 4 times as a sign that the End Times are coming, but even he mentions that there have been several people who are “anti-Christian.” The idea was that the more you see people in the world denying Christ, the more likely it is that he will come again to prove them wrong. It’s not one guy or some Satanic baby who is the opposite force of Jesus. It’s people who are “against Christ.”

Also, it should be noted that the Gospel of John is weirder and a little more poetic than the Synoptic Gospels. It’s still canonical, but there’s stuff about Jesus catching 153 fish after he’s resurrected, and the opening harkens back to the Book of Genesis. I’m not saying you have to take it with a grain of salt, but if there’s something specific that doesn’t jive with your understand of what Jesus said, it’s probably in the Gospel of John.

4. Jesus was visited by three kings.

The Bible actually says Jesus received three gifts and they were given by Magi or “wise men.” Later, people started to say they were three kings ruling over specific realms. This would show how important the baby Jesus was. However, Herod sent “some wise men” with three gifts to fulfill a prophecy according to Matthew. They were smart people, and there was more than one of them, but the Bible doesn’t say how many or whether or not they are kings.

No. The correct answer is debatable, but it is decidedly not in December or January. For one thing, shepherds would have stopped tending to their flocks sometime in October to avoid cold weather. Also, there’s plenty of evidence that “Yule,” a Germanic pagan celebration of the Winter Solstice was likely coopted by the early Christians. Even so, not all Christians celebrate Christ’s birth on the 25th. Eastern Orthodox celebrates Jesus’s birth on January 7th.

6. Praying directly to Jesus is the right way to pray.

Yes, he did say he was “the way” and “no one comes to God the Father but through me.” But, he also told people the proper way to pray was to The Father, and we get the “Our Father” directly from Jesus. He never said, “worship me and me only and make sure you make little statues of me dying on a cross.” It’s fine if your religion teaches you to remember him that way, but it’s not in the Bible.

Jesus definitely did say, in so many words that he was The Son of God or that he was “the Word” but he didn’t say treat me like a totem in the place of God, The Father. Jesus said: “It is written, That man shall not live by bread alone, but by every word of God.” Luke 4:8

Stop slut-shaming this woman! She’s a saint, dang it! Mary Magdalene was present at the tomb and the crucifixion when the menfolk abandoned and denied Christ. She’s a symbol of devotion to the Lord. She’s also, however, confused with four other Marys in the gospels. For starters, there’s Jesus’s mother Mary. There are also some “sinful women” like Mary of Bethany, and Mary who had some demons drawn out of her. The point of the gospels is that we’re all sinners and Jesus has come to wipe the sins away. It’s not contingent on someone very close to him being full of sin.

The idea that Mary was a former prostitute is not expressly claimed in the Bible, and comes from years of hemming and hawing about her kissing Jesus and being forgiven for her sins. We tacked on what those sins were later.

8. What The Immaculate Conception actually is.

People commonly misinterpret the phrase to mean that Jesus was born of his virgin mother, Mary and conceived by God. The Immaculate Conception, however, as any good Catholic school graduate will tell you is about Mary herself being born without sin. She is a sinless lady like her son. And guess what. That’s not in the Bible at all. You have to do some verbal gymnastics to actually find that teaching in any of the gospels.

9. Lucifer is the name of the Devil.

“Lucifer” actually means “morning star” and is more likely a description of the Devil himself. The Devil is in fact a real entity in Christianity, not just the idea of Evil. He’s the same guy who tempted Jesus in the desert and goes by 20 different names. Lucifer stuck with us but really is a description rather than a title in the Bible.

10. Jesus was against gay marriage.

It’s mostly unclear. He acknowledges that God made men and women and that two people who get married “become one flesh,” but his statement is making a different argument about rules concerning marriage. Jesus is much clearer about something else that’s forbidden: divorce. Jesus said: “Whoever divorces his wife, except for sexual immorality, and marries another, commits adultery; and whoever marries her who is divorced commits adultery.”

Once the flesh becomes one flesh, don’t separate what God brought together. Sorry to tell you this, but Jesus had stronger opinions on divorce rates than who can marry whom.

There is a heated debate that’s been raging about whether or not Jesus had siblings. The New Testament says he had four brothers and sisters. While some believe the word might mean “cousins,” most scholars agree there was a separate word entirely for “family relations” and a more specific word “adelphos” which means “brother.”

Now, does that mean that Mary and Joseph had more kids? Does it mean Joseph had kids with another woman? The kids seems to be hanging out with Mary, and there’s no reason she couldn’t make half-siblings with her Earthly husband after Jesus was born and still achieve a virgin birth first. Still, people get very upset about the subject. In 2002, someone found a box full of bones with “James, brother of Jesus” written on it, and people lost their minds. If nothing else, it’s debatable.

Additionally, Jesus made a point in Mark 3:34 to claim that his followers were his new family: “But Jesus replied, “Who are My mother and My brothers?” Looking at those seated in a circle around Him, He said, “Here are My mother and My brothers!” Why point out that he had a “real” family to disavow for the sake of his new family if they weren’t actually blood relatives?

12. Only what’s in the Bible should be believed

The gospels say otherwise. In fact, most Christians can tell you that though they believe the Bible itself was inspired by God, it’s not the literal words of God. There’s poetry and metaphor and even mentions that Jesus is speaking on behalf of the Father not as the Father Himself, and on and on. A big reason further interpretation of Christ’s words are permitted by the Catholic Church is that Jesus himself gave Peter the “keys to the Kingdom of Heaven.” This authority is the bedrock for the church Jesus wanted to build on Earth, and he gave his disciple that honor and responsibility. If Jesus himself said “you’re in charge when I’m gone” to the people following him, he probably didn’t get to every question they had.

13. The Eucharist is just a symbol of Jesus.

Sorry to all the protestants reading this, but no. Not according to what Jesus Himself said in the New Testament. For all I wrote above about not taking Jesus’s words literally, this one is pretty specific and shows up four separate times in the gospels. However, anyone who’s ever been to a Seder meal knows that the food on the table represents stuff that has happened, and Jesus often spoke in metaphors. This is a touchy subject, but the entire notion of transubstantiation is based on the fact that Jesus, in the Bible, said “this is my body. This is the blood of the covenant.” Then again, he said “do this in the remembrance of me” which sounds a lot like saying “this is a ritual not to be taken literally but in remembrance.”

I leave it to theologians to debate the subject, but suffice it to say: if you read what he actually said in the Bible, it is His body and blood.

Full disclosure: I attended a Jesuit school but am not a Christian. If you have any questions about the veracity of the above article, please contact The Pope.