Some things are impossible to unsee, and this viral image is one of them. It’s a photo that’s being widely shared on social media, and not because people love it — but because people hate it very very much. There’s no way to make this sound profound, so I’ll just explain it simply: it’s an image of a Croc wearing Crocs. 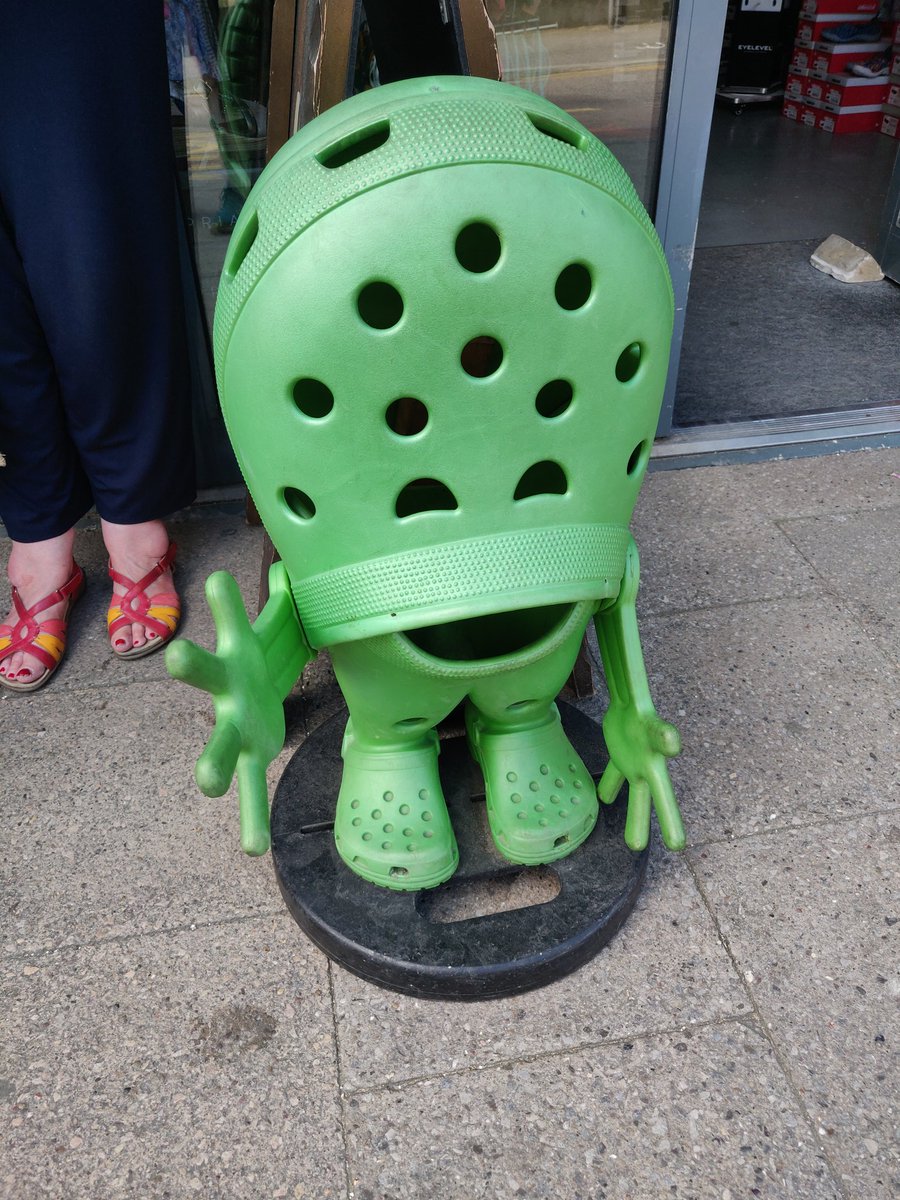 Yes, the living Croc thing was first posted by Twitter user Fancywookiee. “A Croc man wears a pair of Croc shoes. Is he made of shoe, or are his shoes made of flesh? He screams, for he does not know,” they write. A pickle-green Croc shoe has somehow sprouted legs and hands, with an eerie smile and tiny, beady crescent holes for eyes.

A Croc man wears a pair of Croc shoes. Is he made of shoe, or are his shoes made of flesh? He screams, for he does not know. pic.twitter.com/iP3ty9XyTl

In an act of self-referential absurdity, the Croc is wearing Crocs, which begs the question: are only some Crocs alive? Did the sentient Croc collect the bodies of other sentient, probably baby Crocs, to wear on its own Croc feet? Who decided this was a good idea, and why was this idea carried out? Just because you can do something doesn’t mean you should.

Why are people so uncomfortable with Crocs Man? It’s hideous, sure, and feels very uncanny valley. But the image may activate trypophobia in some people, and that’s why folks hate this thing so much. Trypophobia is an intense fear or revulsion of bumps, holes, or perforations in clustered patterns. While it’s not officially considered a phobia, many people experience some form of disgust when viewing such images — which could explain why the internet hates Crocs Man. Weird holes just freak people out.

According to MSN, the Crocs Man isn’t just a random thing, it’s actual merchandise by Crocs and is meant for children. Presumably to play with, but maybe also to indoctrinate them into cannibalism. Who knows.

PSA: No Croc men were harmed in the making of our Classic Clog. https://t.co/yGwS5Z4fHD

All over social media, folks shared their discomfort in hilarious ways, capturing the many ways in which Crocs Man has disturbed them to their core.

Many complained of nightmares, another Twitter user expressed a need to discuss it at their next therapy appointment. Others even found cousins of Croc Man, in different colors and sizes, but still with that creepy grin and hole-ridden body. We’re never wearing Crocs again.

I Have No Mouth And I Must Scream

I found the girlfriend pic.twitter.com/6CUU8jDfdd

i have croc mans’ child, i think it’s lost pic.twitter.com/eT3bvgf0s1

wanda to his cosmo pic.twitter.com/P1wxjoJW4S

SURELY HIS NAME IS CROC MONSIEUR???!!!