This is a hard story to set up, you kind of have to just dive right in. Twitter user @isaactweeting shared pictures of an extremely long letter. In the age of social media, I’d probably skip over a post like this because it’s so dense and weird, but I’m glad I didn’t. He captioned it:

“One of my best and oldest friends broke up with his high school girlfriend over a decade ago. Today, his wife of 7 years found this absolute ornament in their mailbox. Just…stop what you’re doing and read..”

By absolute ornament, he means a letter sent to his best friend by a very weird old man.

One of my best and oldest friends broke up with his high school girlfriend over a decade ago. Today, his wife of 7 years found this absolute ornament in their mailbox.

The letter is titled, “DEMAND For RESTITUTION FOR STEALING MY DAUGHTER’S HONOR,” and it gets wilder from there. To be clear, it seems like this was a consensual sexual relationship, based on other tweets. No one was assaulted and nothing was “stolen.”

“It has been nearly ten years since I learned you stole my daughter ____’s virginity,” the letter’s author begins. “Initially, it was my intention to forgive you. But after I confronted you about it and you expressed repentance, I later learned you have since gone and done the same to others. Moreover, you have regarded the matter more like winning a game than the despicable deed it was. So, I have decided to irrevocably retract my offer of forgiveness.”

He then says he has been studying the scriptures to find an “appropriate response” to this perceived transgression. He eventually outlines what restitution he thinks he is owed, based on some very long and descriptive explanations based on Bible stories. 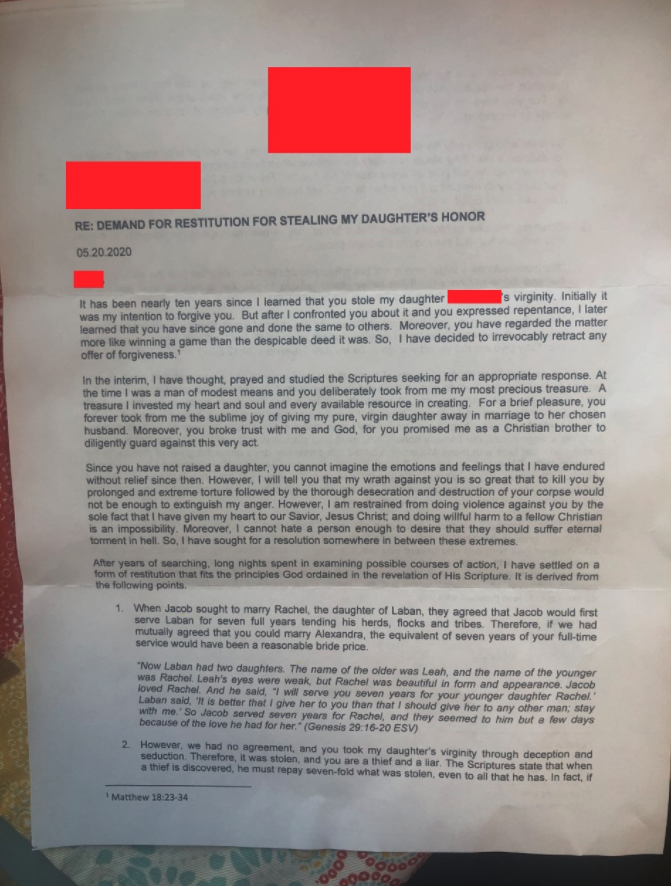 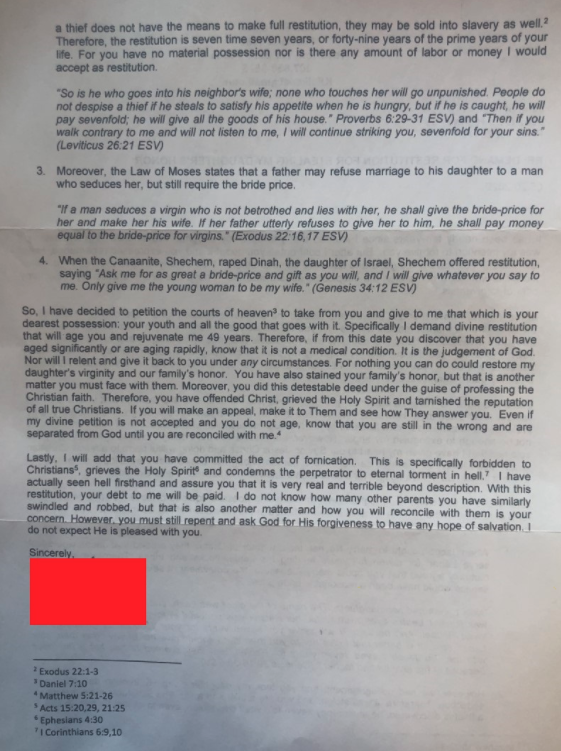 The text in full:

RE: DEMAND FOR RESTITUTION FOR STEALING MY DAUGHTER’S HONOR

It has been nearly ten years since I learned that you stole my daughter [name redacted]’s virginity. Initially it was my intention to forgive you. But after I confronted you about it and you expressed repentance, I later learned that you have since gone and done the same to others. Moreover, you have regarded the matter more like winning a game than the despicable deed it was. So, I have decided to irrevocably retract any offer of forgiveness.

In the interim, I have thought, prayed and studied the Scriptures seeking for an appropriate response. At the time I was a man of modest means and you deliberately took from me my most precious treasure. A treasure I invested my heart and soul and every available resource in creating. For a brief pleasure, you forever took from me the sublime joy of giving my pure, virgin daughter away in marriage to her chosen husband. Moreover, you broke trust with me and God, for you promised me as a Christian brother to diligently guard against this very act.

Since you have not raised a daughter, you cannot imagine the emotions and feelings that I have endured without relief since then. However, I will tell you that my wrath against you is so great that to kill you by prolonged and extreme torture followed by the thorough desecration and destruction of your corpse would not be enough to extinguish my anger. However, I am restrained from doing violence against you by the sole fact that I have given my heart to our Savior, Jesus Christ; and doing willful harm to a fellow Christian is an impossibility. Moreover, I cannot hate a person enough to desire that they should suffer eternal torment in hell. So, I have sought for a resolution somewhere in between these extremes.

After years of searching, long nights spent in examining possible courses of action, I have settled on a form of restitution that fits the principles God ordained in the revelation of His Scripture. It is derived from the following points.

1. When Jacob sought to marry Rachel, the daughter of Laban, they agreed that Jacob would first serve Laban for seven full years tending his herds, flocks and tribes. Therefore, if we had mutually agreed that you could marry [name redacted], the equivalent of seven years of your full-time service would have been a reasonable bride price.

“Now Laban had two daughters. The name of the older was Leah, and the name of the younger was Rachel. Leah’s eyes were weak, but Rachel was beautiful in form and appearance. Jacob loved Rachel. And he said, “I will serve you seven years for your younger daughter Rachel.’ Laban said, ‘It is better that I give her to you than that I should give her to any other man; stay with me.’ So Jacob served seven years for Rachel, and they seemed to him but a few days because of the love he had for her.” (Genesis 29:16-20 ESV)

2. However, we had no agreement, and you took my daughter’s virginity through deception and seduction. Therefore, it was stolen, and you are a thief and a liar. The Scriptures state that when a thief is discovered, he must repay seven-fold what was stolen, even to all that he has. In fact, if a thief does not have the means to make full restitution, they may be sold into slavery as well. Therefore, the restitution is seven time seven years, or forty-nine years of the prime years of your life. For you have no material possession nor is there any amount of labor or money I would accept as restitution.

“So is he who goes into his neighbor’s wife; none who touches her will go unpunished. People do not despise a thief if he steals to satisfy his appetite when he is hungry, but if he is caught, he will pay sevenfold; he will give all the goods of his house.” Proverbs 6:29-31 ESV) and “Then if you walk contrary to me and will not listen to me, I will continue striking you, sevenfold for your sins.” (Leviticus 26:21 ESV)

3. Moreover, the Law of Moses states that a father may refuse marriage to his daughter to a man who seduces her, but still require the bride price.

4. When the Canaanite, Shechem, raped Dinah, the daughter of Israel, Shechem offered restitution, saying “Ask me for as great a bride-price and gift as you will, and I will give whatever you say to me. Only give me the young woman to be my wife.” (Genesis 34:12 ESV)
So, I have decided to petition the courts of heaven to take from you and give to me that which is your dearest possession: your youth and all the good that goes with it. Specifically I demand divine restitution that will age you and rejuvenate me 49 years. Therefore, if from this date you discover that you have aged significantly or are aging rapidly, know that it is not a medical condition. It is the judgement of God. Nor will I relent and give it back to you under any circumstances. For nothing you can do could restore my daughter’s virginity and our family’s honor. You have also stained your family’s honor, but that is another matter you must face with them. Moreover, you did this detestable deed under the guise of professing the Christian faith. Therefore, you have offended Christ, grieved the Holy Spirit and tarnished the reputation of all true Christians. If you will make an appeal, make it to Them and see how They answer you. Even if my divine petition is not accepted and you do not age, know that you are still in the wrong and are separated from God until you are reconciled with me.

Lastly, I will add that you have committed the act of fornication. This is specifically forbidden to Christians, grieves the Holy Spirit and condemns the perpetrator to eternal torment in hell. I have actually seen hell firsthand and assure you that it is very real and terrible beyond description. With this restitution, your debt to me will be paid. I do not know how many other parents you have similarly swindled and robbed, but that is also another matter and how you will reconcile with them is your concern. However, you must still repent and ask God for His forgiveness to have any hope of salvation. I do not expect He is pleased with you.

All of this sounds crazy already, but I was still not prepared for the conclusion.

“So, I have decided to petition the courts of heaven,” he writes. “To take from you and give to me that which is your dearest possession: Your youth and all that goes with it. Specifically I demand divine restitution that will age you and rejuvenate me 49 years. Therefore, if from this date you discover that you have aged significantly or are aging rapidly, know that this is not a medical condition. It is the judgment of God. Nor will I relent and give it back to you under any circumstances. For nothing you could do could restore my daughter’s virginity and my family’s honor.”

He adds that if the “offender” does not age, he’s still wrong and separated from God until he reconciles with this bonkers old man. How convenient.

Hard to know what to say in response to something like this, but most replies are suggesting the letter’s recipient protect himself:

I knew the guy and his daughter when I was a teenager. Every bit as possessive and abusive as he sounds here.

In my years of seminary we never got to the youth stealing part of the Bible. Very upset

The use of what clearly seems like witchcraft is killing me.

I laughed so hard I aged decades into damnation

I think my Dads most prized possession is his Bluetooth headphones, but to each their own I guess…

My first thought was, dude needs a hobby.

My next thoughts were <silent screaming>

In the mirror, I presume

Imagine spending ten years just thinking about your daughter getting doinked in the back of a Honda Civic.

Excellent point. God, omnipotent only in some areas …

There was also a bit more info on the girlfriend offered:

One of my best and oldest friends broke up with his high school girlfriend over a decade ago. Today, his wife of 7 years found this absolute ornament in their mailbox.

I don’t think the ex gf and her father have had contact for years, honestly.

Ol Dad deleted me on Facebook. I am devastated pic.twitter.com/tvWp1v8kRe

Hmm, I wonder why?