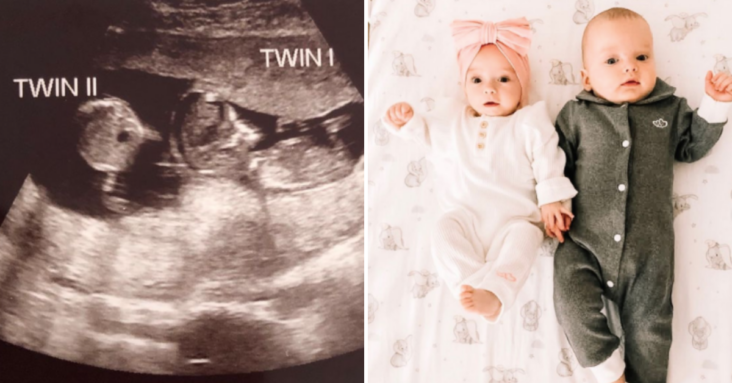 If you’ve ever been pregnant, you know that it’s a roller coaster ride of emotions.

In the case of Roberta Roberts, it was all that and then some—meaning, a surprise baby was conceived when she was already pregnant with one.

Roberts and her partner, who had been struggling with infertility, were so excited when they finally got a positive pregnancy test. And everything was looking great. They were able to see the baby and its heart beat at a sonogram appointment.

Then everything changed at 12 weeks. Roberts went in for a check-up, and her doctor saw something unusual: it appeared as though Roberts was suddenly carrying two babies. One of the babies was much smaller and less developed than the other. Twins.

“I thought something awful had happened,” Roberts said. “The sonographer looked at me and was like, ‘do you know you’re expecting twins?'”

As Roberts learned, this was no ordinary set of twins. Her pregnancy was diagnosed as a rare condition called superfetation. This is when a person who is already pregnant conceives another baby.

“It just doesn’t happen,” said Roberts’ doctor David Walker said, explaining that it took multiple scans before he was able to diagnose the condition.

“We were concerned because the second twin was much smaller. It was only by regularly scanning and seeing that the rate of growth was consistently three weeks behind that we realized it was superfetation,” he said.

So, how did this happen? Ordinarily, when someone becomes pregnant, hormonal and physical changes prevent another conception. But Roberts continued to ovulate.

“Instead of stopping ovulation, she released another egg about three or four weeks after the first one, and the egg somehow miraculously managed to fertilize and implant in her uterus,” Walker said.

There is no way of proving that the fertility drug Roberts was on, which was intended to stimulate ovulation, is responsible. Walker said that Roberts did not release two eggs at the same time, “which is what the medication normally does. But we have no way of proving it one way or another.”

Roberts knew she was likely to enter preterm labor, so it was vital to ensure that the smaller baby was far along enough to survive outside of the womb. At 33 weeks into pregnancy, doctors decided to perform a C-section to deliver both babies. On Sept. 17, Noah was born first, weighing 4 pounds and 10 ounces. Then came smaller Rosalie, weighing 2 pounds and 7 ounces.

“We got to see both of them as soon as they were born,” Roberts said. “It was absolutely beautiful.”

The babies spent over three weeks in the neonatal intensive care unit before being brought home.