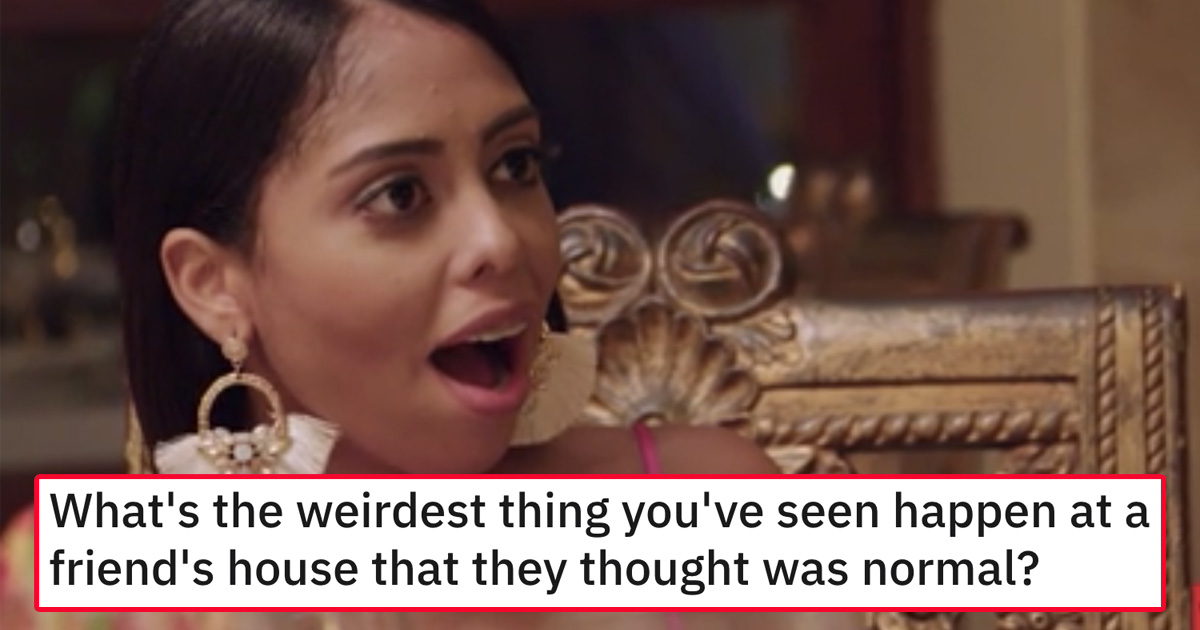 You know how you visit a friend’s house and everything is just this side of “different”? A plant not in the right spot, a dinner routine not your own? That kind of thing. And it’s not usually too batsh*t bananas; it’s usually kind of a lark to do something a TAD different…

And then there’s these families.

Check out all these tales of super bizarre household rules and living situations we’ve rounded up for you and wonder: am I… am I … normal?

“I was at a house where someone was in the bathroom, so the kid who lived there went into the back garden, took a sh-t in the flower bed, and shoveled dirt on top of it. The bathroom was free by the time he’d finished.” —u/anti-theft-device

“At every meal, my ex’s parents would set a plate on the table for the dog. The dog would sit in a chair and eat at the table with the people.” —u/WildRonin24

“I went to a sleepover at this girl’s house, and her mom was obsessively taking pictures of us all night. At one point, we were watching a movie and my friend passed out, and her mom — I shit you not — pulled out a huge, newscast-type, heavy-duty camera and started recording her daughter sleeping for a good five minutes!” “I have trouble sleeping, so later, I was on the floor staring at the wall in the dark when I heard the door creak, some footsteps, and then the darkness of the room lit with a sudden flash! I got up just in time to see the door close. I know it was her mom taking pics of us. And the weirdest part is that it was about 3 a.m., meaning she either set an alarm or just stayed up that late, waiting.” —u/TraditionalEye4686

“My friend’s family walked around nude at home 24/7. My friend invited me over to play Nintendo after school. When we got inside, he stripped down butt-ass naked and went to make a sandwich!” “And everyone else was naked and loitering.” —u/krmsyn

“I found out my best friend thought that the toilet seat was only for kids. He would straight up sit on the rim of the toilet and poop until I found out when we were in college. We were talking about pooping at other people’s houses, and he nonchalantly told me he cleans the rim spotless before sitting on it, and I was like, ‘Hold up, what?!”

“When I was around 10, I had a friend whose home had a room that was just filled to the ceiling with trash, and they’d start playing in it!” —u/Ghostshriek

7. Designed to prevent jerking off

“I slept over at my friend’s house when I was around 10. She was the only girl in her family and had five brothers between the ages of 4 and 15. Everything about my friend’s room was normal, but her brothers’ room was bizarre. They shared one big room with three bunk beds, each with a mattress, fitted sheet, and a pillow — nothing else. No top sheets, no blankets, no comforters. And the boys didn’t have pajamas — they just slept in the clothes they had worn that day, their shirts tucked into their pants and their belts on! Their room didn’t have a door, and neither did their connected bathroom or their closets. Turns out, they were fundamentalist Christians, and their room setup was meant to prevent masturbation.” —u/SSDGM24

“One of the first times I met my husband’s family, I was at their house and my husband gestured for me to sit down and get comfortable. Well, they had a couple of couches facing each other and a few other chairs. Not knowing the ‘rules,’ I sat down on one of the couches, which had about 30 medium-sized teddy bears on it. You would have thought I sat down on live bears! My husband’s mother and twin brother both visibly reacted as if I had damaged the bears! That was when I was told that the couch was for the bears — ONLY for the bears — and no one was allowed to sit on the bears’ couch!” “And the bears were all wearing little beaded necklaces with their names on them because they were otherwise identical.” —u/flordianreader

“I shared a house with a bunch of people who regularly set their farts on fire. I don’t know why. They just did. And they weren’t even drunk. This was just normal behavior for them!” —u/CrunchityFrog

“I had a friend in high school whose mother was a hoarder. There were little pathways throughout the house, but it was filled — from floor to ceiling — with junk. In the hallway to the bedrooms, she had stacked every newspaper she ever got, tied up in bundles. And when I walked down that hallway, my friend cautioned me not to touch the papers because if a row fell, it would take a few hours to dig yourself out!” —u/ferrariguy1970

“When I was a kid, I was at my friend’s house eating lunch at the dining table when the home phone rang. Everyone immediately fell to the floor around me, including the mom and dad, and I was the only one left sitting there, so the dad informed me that I had to answer the phone. I said, ‘Hello, Johnsons’ house,’ and then held the phone out to their dad, saying, ‘Umm, it’s for you.’ Everyone laughed, but I was so uncomfortable, the next time that phone rang, I was the fastest one to the floor!” “Such a fun, loving family. I loved going there!” —u/itastecolours

“When I was 7, I went to play with a new friend, and she asked if I wanted a snack. I said, ‘Sure,’ so we went to their playroom, where there was a mini fridge stacked with full-sized candy! She casually tossed me a pack of Rolos. I marveled at the largest amount of candy I have ever seen still to this day, and the fact that she and her siblings all had free access to it at such young ages. My friend was surprised at my surprise, and she asked me what I kept in my snack fridge!” “When I told her I didn’t have one, she was absolutely gobsmacked at the idea that I didn’t have a mini fridge full of candy at my disposal and whim!” —u/RuyiJade

“I had a friend whose family lived on a huge property and kept cows for the property tax exemption. Well, once, my friend asked me to come by to pick up something, and I swear, there was a full-sized cow chilling on one of their couches in the living room! Really nice people, though.” —u/Veg305

“My childhood neighbors’ TV was always at 75% volume or higher. They’d literally sit in the living room screaming at each other over the TV on blast!” —u/RustyShreklford

“The weirdest thing I’ve ever seen is someone serving ice cream with their hands.” —u/sleeknub

“My friend had nine siblings, and whenever we ate at their house, he always told me to ‘protect my food.’ He literally covered his plate by surrounding it with his arms. His brothers kept stealing food from the younger ones, and their parents didn’t do anything to stop them! It was just normal.” —u/Prudovski

“Once, I walked into my girlfriend’s living room, and out of nowhere, their chocolate lab jumped through an open window from outside and landed on the couch! I just froze, and her son was like, ‘Oh, he does that.'” —u/L3aveblank