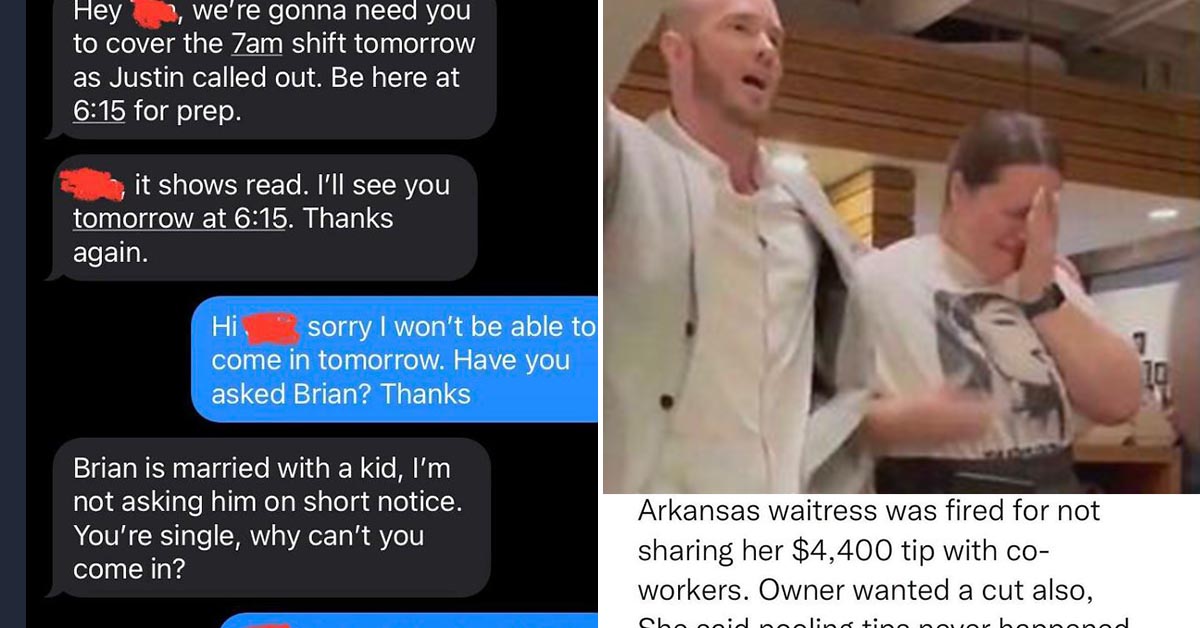 Ever dreamed about your epic “that’s enough” moment at your job?

Well, these people are living the dream.

1. Quit my job last night, it was nice to be home to make the kids breakfast and take them to school today! Off to hunt for a new opportunity, wish me luck 🙂

That’s what I’m fucking talking about.

I work as a welder and today my employer individuallly talked to all the welders and offered us a raise because they want to keep employees and they also want to attract new people, when he told me my hourly pay rate when up by 4$ hour l almost couldnt believe it. I work a lot of OT and I work the Night shift. I was feeling burned out from the hours but once I got the raise I was so happy I went right back to work and now I’m working all the OT I can get. I’ve been with this company three months they have bought me a pair of boots, uniforms, prescription safety glasses, and give me a lot of free equipment for protection, and my morale just keeps getting higher while I work till 3 am with a smile on my face.

Invest in your employees, when you treat them like an asset and not a cost, you get better as a business.

3. So this just happened and I’m almost numb atm. I hope I don’t regret this tomorrow as I do enjoy my job, but management is rough

4. When you’re so antiwork you end up working

5. Just rotten to the core

6. Finally decided I’d had enough of my P.O.S. boss on Monday, & damn did it feel good

8. Between a friend and his manager at a small packing plant.

For almost a year, my boss has been constantly letting me know how lucky I am that I have a job at this company. He would have me do tasks way outside of my job description (and comfort zone), tell me to work overtime off the clock, ignore every suggestion I’ve made, micromanage everything I do, and undermine me at every step. I currently get anxiety attacks every time I see his name on my phone because there’s a good chance he’s about to yell at me about something that’s his fault.

I asked them to change the work environment and treat me with respect. He told me “no”. He reemphasized that I should be grateful for this role, I need to try harder, and I won’t find a job elsewhere.

I just proved him wrong. I’ve been secretely applying and interviewing for the past 5 weeks and have received about 10 offers at this time. I’m about to sign the paperwork to officially accept one for a much better job that pays 40k more. The interviewer will be my future boss, and he actually treated me with respect and as if I was a person *gasp*!

Drafting up my resignation letter now and I can’t stop smiling.

So I looked her dead in the eye and said “I can’t afford a lot of food.”

The resulting 5 minute awkward silence was the best five minutes of my life.

Edit: good lord this blew up. First of all, I know this is cliché, but seriously PLEASE don’t award this post! Send the money to a charity that helps get food to people instead 🙂

As for the fraction of people yelling “fAkE!”, If you go to comments I already explained the basics. If you’re really that mad and that sure it’s fake, try reading those first. If you don’t want to/do and still don’t believe it happened- congratulations! You get the biggest sceptic award! And with that comes the wet towel sash 🙂

11. I quit my job 2 weeks ago and they reversed my final direct deposit without notifying me in retaliation.

12. This fucking motivational quote when I walked in this morning

13. This sub gave me the motivation to finally quit my abusive job. I may not have health insurance, but I feel so free!

14. Boss told me after massively overworking me that if I want to play in his sandpit I need to toughen up. Told him I don’t want to play in the sandpit, I want time to lay on the lawn with my cats. He told me to take my cats and fuck off. He was bluffing. I wasn’t. I quit! Coming at ya from my lawn!

15. So my best friend just got this email… what the actual fuck!?

16. Is it normal to not want to discuss the base pay?

After several months of having my vacation time off requests denied, my staff being fired and not replaced and my work hours increased without my consent, I walked into my boss’ office and handed her my resignation letter. I was giving 4 weeks notice, which I thought was nice. She looks at me, says “No. I can’t deal with this today.”, packed her stuff and left for a day of shopping on company time.

I went to my office, cleaned it out, finished off a day’s work and put my keys in her mailbox.

The next day I got a call from HR saying they were giving me the day off without pay to think about what I did and that I was expected to be at work the next day.

20. Amazon tornado text exchange. Your life is just numbers in a machine, make the correct call.

21. Boss ate half of my lunch while I was in the bathroom

I went to the bathroom and came back to find my lunch box open and half of my meal missing. Confused, I asked about what happened from an older lady who sits next to me. She responded that our boss came in, noticed the food on the table, took half of it on a plate, and left for a meeting. I got angry and complained about how unacceptable that was, but she told me to just shrug it off and that it’s “to be expected”. I mean..???

Edit: My boss is a woman, please stop assuming its a man lmao

22. I put in my two weeks and my manager said I have to tell her where I’m going

23. Manager steals tips; one upvote and he gets my 2 weeks today.

Edit: I am going to quit tonight. Not even finish my shift. He’s getting my keys and uniform and im gone. Thank you guys for the words and the help! I’ve been working since I was 14 under incredibly shitty bosses so I never realized how illegal his actions were. I’m going to call him out tonight and leave during my shift. I truly do appreciate you guys. Ill update it when i do quit :)!

Sorry for the format, I am on a phone. Your guys’ favorite thing to hear. I recently started work at a pizza place in Washington state. I should’ve known my interview was a red flag when the entire time my manager talked about his medical issues. A delivery driver ended up quitting a few weeks after I started because of the verbal degradation our manager was giving him. ‘This boy went to college but is too fucking dumb to remember what’s garlic butter’ type stuff. he verbally insults everyone that walks into the shop to or behind there face. I should’ve left then but I stayed. I made 30 cents more than Min wage for being a TL. (which he took away january first) and I thought everything was okay. until it was me and him working one night and we made over 1k in food. I received $105 worth of tips that night and my manager gave me 45$ which really made me mad since he was told not to take tips by his boss. My final straw was last night. from 11am to 9 pm we made 34$ in tips total. At 7pm when my manager left we had made 24$ in tips and he decided to take 30$ out of the till leaving me with a 2$ tip at 9 pm. He stole money from the store. He continued to take tips when he didn’t do any work. The entire crew is quitting because of how shitty he treats us.

hi everyone! basically what the title says. im 17 years old, still in high school, and working 40+ hours a week. i just put in my letter of resignation (NOT my two weeks) and my boss spammed called me saying that i wasn’t allowed to quit and if i do i’ll never be allowed to work at another insert fast food place here again. im so pissed

edit: this is in america and my parents do know about my hours, they tell me i need less hours but don’t really push, i just need to keep my grades up another edit: i work 4-11 4 days a week and 7-3 on the weekends. my grades are not up so that’s why i am quitting.

25. Never told a boss off like this. And it felt amazing.

26. Please note the timestamps. Any suggestions on how to deal with this outrageous unfairness?

27. Found this posted at my job after a mandatory meeting

29. I quit this morning. I sent this email to everyone in the company.

30. Boss wanted me to come in on days that I requested off. Then threatened me when I said no.