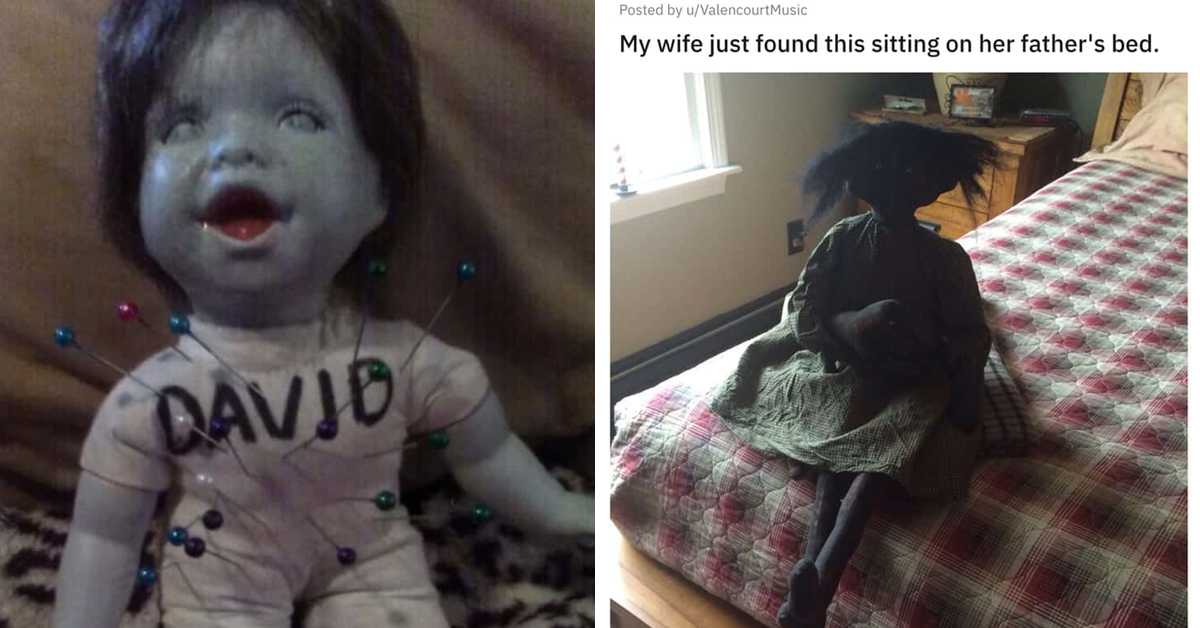 I admit it: I had dolls as a kid. I didn’t think they were creepy. But now? But now?? They’re tiny, unblinking, unmoving children. One or two keepsakes are probably fine, but anything more and … Y’all, I just shuddered.

My dad is a large antique collector and he’s always preferred oddities over normal antiques. A few months ago, he found an antique ouija board (and planchette) on eBay and won it.

We ended up getting two boxes in the mail. My dad was equally puzzled about the two boxes but they were both addressed to him. He opened the first box and there was the ouija board and planchette. So, I opened the second box and I see an antique doll staring up at me.

My stomach dropped. My dad picked it up and had no clue why it was shipped to us. The doll gives me a horrible feeling and every time I look at it, I just feel completely creeped out. We assumed the seller had accidentally shipped both the doll and the ouija board to us by mistake. My dad contacted the seller, sent pictures of the doll, but they said they had never seen it before.

We did some research and it is a German doll from the 1800s. These dolls can be worth a lot. It’s weird someone would just give it up. We still have the doll behind glass. It’s been almost 6 months and we have yet to hear anything from anyone.

TL;DR: Dad ordered an antique ouija board and received an extra package that had an 1800s German doll in it. We contacted seller but they said they have never seen the doll before.

10. Found in the woods again. STOP PICKING THESE UP

12. These are very haunted.

16. Let it lay there in peace, you fools

17. Jesus, it looks like it lived through a fire

I was driving past a yard sale when this doll caught my eye. It was on a chair with a piece of paper taped to its chest that said, “Haunted. Take it. It’s FREE.” I found it funny and asked the owner why she thought it was haunted.

The owner told me she had bought it at a thrift store after her daughter begged for it. Her daughter immeditaly named the doll Violet. The very next day she hears another girl’s voice arguing with her daughter in the living room. She went and saw her daughter sitting on the couch watching TV with Violet beside her. She asked her who she was talking to and she said Violet.

A week later, while her daughter was at a friend’s house, the owner begins hearing a girl’s voice coming from her daughter’s bedroom. She goes to check and sees Violet sitting in the middle of the room. She grabs Violet, puts her on the bed, and walks out. As she begins walking towards the kitchen, she tells me she saw the magnetized letters on her refrigerator spell out, “Hi.” Then, a music box in her living room starts to play, and the door to her daughter’s room slams shut. She grabbed her keys and left the house in a hurry.

She waited outside until her husband came back home. When they opened the door, they see Voilet in the living room sitting on the coffee table in front of one of her daughter’s coloring books. Her husband grabbed Violet and threw her in the shed, where it stayed until the morning of their yard sale. After her story, she looked me in the eyes and said, “Take it. We don’t want it in our lives anymore.” I was skeptical, but I loved the story, plus it was free.

I took it home and placed it right on the nightstand besides my bed. Almost a month went by without experiencing anything, until one night, I felt the weight of someone [sitting] at the foot of my bed. I turned the lights on but didn’t see anything. I live alone with no pets, so I was quite startled.

A couple days later, I was in the kitchen making a sandwich when I hear a disembodied girl’s voice whisper, “Hey.” I ran to my room but convinced myself it was nothing. Later that night, I was laying on my couch when I hear giggling coming from my bedroom. I get up walk inside and see Violet sitting on my bed. Even though I always keep her on the nightstand, there she was was on my bed.

At this point, I started to believe the woman’s story, so I bought an EMF detector. I have seen them being used on ghost shows before, so I thought I’d give it a try. I put it near Violet and got constant high readings from her. I was intrigued, so I bought a spirit box in an attempt to try to continue to communicate with her. After two weeks of nothing but static from the spirit box, I finally got a “Hi,” followed by, “Get the thing.”

I was excited, so I went back to the previous owner. I told her about my experiences and investigation on Violet. I asked if there’s anything that the doll might have been attached to. She told that maybe it was the music box that went off. I asked her if she still had it, and she gave it to me.

A few more on-and-off spirit box sessions later, I finally got a girl’s laugh, followed by something that sent a chill down my spine: a man’s voice that said, “Devil.” Immediately, I thought of the theory of demons disguising themselves as little girls in order to get you in a vulnerable state. I didn’t want to take the chance, so I grabbed the doll and threw it outside onto my backyard. It landed face first. The next morning I decide to take the doll and put it into a storage unit. I opened the back door and see it sitting down a few feet closer to where it landed staring right back at me. I grabbed it and put it in storage.

Now It’s been about two weeks, and the activity has stopped, but I haven’t been able to stop thinking about Violet. I have this urge to open the storage room, close the door behind me, and do another spirit box session. My gut tells me not to do it because I may be messing with something evil, and I don’t want to risk having an attachment.

TL;DR: Thought it’d be funny to buy a haunted doll at a yard sale. All was normal until I started hearing voices around the house and found the doll had somehow moved multiple different times. I was convinced the doll was possessed by the spirit of a young girl, but after some investigating, it may be something much more sinister.

20. The hidden eyes are what make it terrifying.