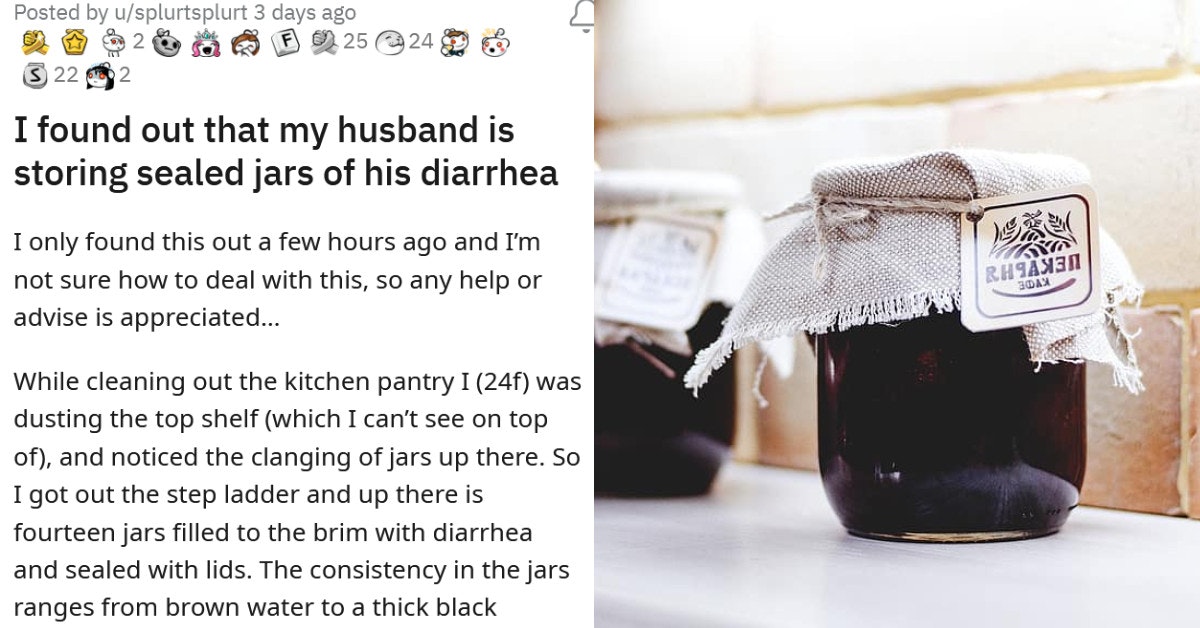 An entry in the Reddit forum “TrueOffMyChest” is another having to do with feces, as stories like that tend to gather here, but this one was particularly horrifying to the point of going viral. In the post, a woman claims that while cleaning the house she shares with her older husband, who has irritable bowel syndrome, she discovered one of the worst kinds of surprises you can imagine stumbling upon in your own home.

At first, she wasn’t sure what was in the jars of brown to black liquid, which seemed to be sorted in a particular fashion, until she made the mistake of opening one. Now she’s turned to Reddit for advice on what to do about the fact that her husband is apparently storing his diarrhea in jars in their kitchen.

“While cleaning out the kitchen pantry I (24f) was dusting the top shelf (which I can’t see on top of), and noticed the clanging of jars up there,” wrote the Reddit user. “So I got out the step ladder and up there is fourteen jars filled to the brim with diarrhea and sealed with lids.”

It’s worth mentioning that the name this woman gave for her throwaway account is “splurtsplurt.”

But it doesn’t end there. Hold on tight, because it gets grosser as she describes how the jars were sorted by consistency.

“The consistency in the jars ranges from brown water to a thick black sludge (like a mixture of blended slugs), and the jars are arranged in order from most watery to most viscous. I only know it’s diarrhea in the jars because I made the mistake of opening [one] and the stench is unmistakably the same as what he leaves behind in the bathroom. The smell was so bad I can still feel it burning the back of my throat.”

The only clue she has into this fecal mystery is that her husband has “IBS-D,” short for irritable bowel syndrome with diarrhea. The word “syndrome” in there means that IBS, which is a very common condition among adults, is basically a collection of related symptoms that doctors cannot determine a cause for. Therefore, some IBS sufferers will go to great lengths to try and figure out why their digestive system doesn’t work right and causes them frequent misery.

Some commenters suggested that this alleged diarrhea storage was a desperate attempt by her husband to track his bowel movements and learn more about his condition. It’s certainly not mind-blowing to think that he would have been embarrassed to admit to this, even to his wife, and that’s why he stored them where he thought his likely shorter partner would never find them.

Others, however, are fairly convinced that this is a fake story, pointing out that the OP hasn’t posted a follow-up or responded to any comments in three days. While fake Reddit posts are a common problem, many commenters believe that this could be real, because as horrifying as it may seem, Reddit has seen worse stories than this that turned out to be real.