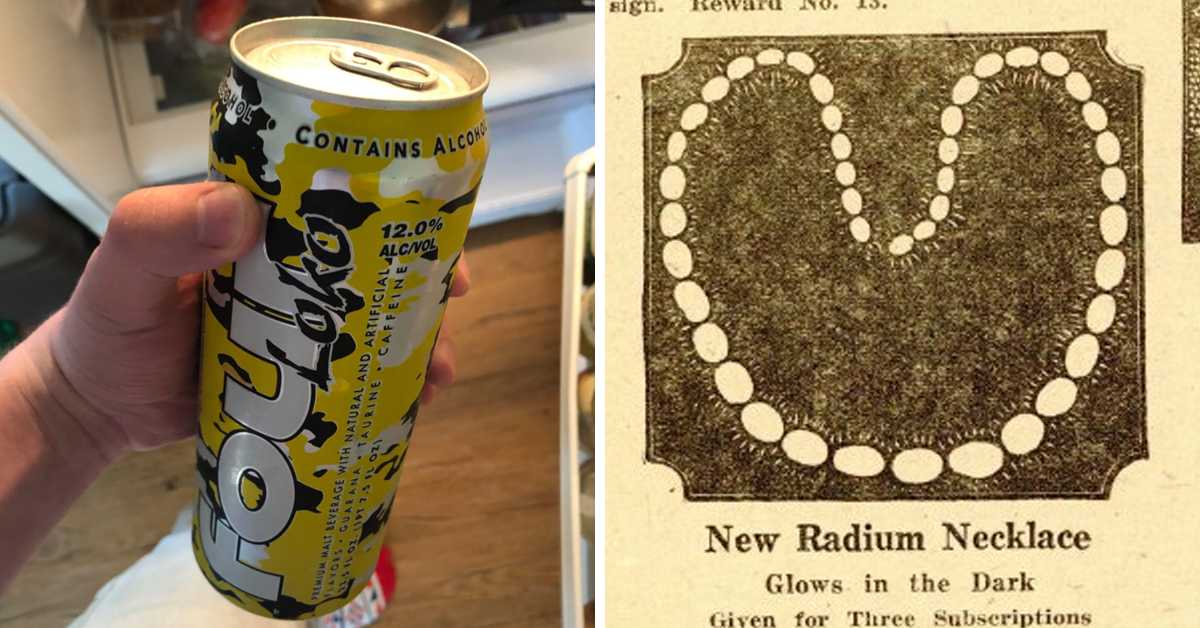 Have you ever seen something being advertised for sale and thought to yourself: “That’s messed up!” Well, you’re not alone. In a recent Reddit thread, people are discussing the most messed-up products they’ve seen for sale.

The conversation began after one user asked the question: “What was the most f–ked up thing to come out in stores that’s now discontinued?”

The answers ranged from an electric tablecloth to voice-activated water pistols. There was also mention of diet pills with terrible names, something called a “worm getter,” and several cancer-causing wearables.

Here are 20 of the most messed up products ever sold, according to Redditors.

I guess radium jewelry that glowed in the dark and gave people terminal cancer.

Many shoe stores used to have fluoroscope X-Ray machines for customers to see how well their foot fit into the shoe they were trying on. They were often unshielded and were highly radioactive.

A table cloth with uninsulated electric mesh wiring running through the entire thing which you could plug in, and no, this was not designed to be a heated blanket. It was sold alongside other electrical accessories you could just plug right in to the tablecloth by stabbing the prongs through the fabric and the mesh wiring.

This obviously resulted in electrocution and fires.

There was a product called the “worm getter” in the 80s, basically a rod that shocked the ground outside your house that for some reason caused worms to come out of the ground so you didn’t have to buy them yourself. Yeah there was about 30 deaths attributed to this thing from people shocking themselves and it was recalled.

Fake snow made from asbestos.

They also made Tinsel foil that was strips of lead foil. Kids used to chew on them and many pets died from them.

There was a doll with an eating function that ended up eating young girls’ hair. The seller also failed include how to turn off the doll in the instructions, so you can imagine the horror stories that went down because of that.

The whole reason that tampons today have warnings about toxic shock syndrome was because of a brand of tampons back in the 70s that were designed to be put in and left in for YOUR ENTIRE CYCLE which of course made them breeding grounds for all kinds of nasty bacteria.

Needless to say they don’t make those anymore.

During the First World War, department stores, including Harrods, sold kits containing syringes, needles and tubes of cocaine and heroin. It was promoted as a present for friends on the frontline – shoot up to make life in the trenches more bearable and alleviate the horrors of war.

My grandfather had a kit for kids to make their own lead soldiers. It came with the molds for the soldiers, a bunch of ingots of lead, and a cooking pot to melt the lead in. Then the child could pour the molten lead into the mold, wait for it to cool, then play with their new toy. What fun!

I used to work at a toy store 20 years ago. There was a hard plastic digimon character (Tsunomon) piggy bank that had a large blade like horn on his head. The blade was surprisingly pointed/firm and the large body meant that it would usually point upwards if left on the ground, waiting for some clumsy child to impale themselves on it. We used to jab other coworkers with it until it made #1 on the list of the most dangerous toys made that year. After seeing that article we put it on a long stick and Jabbed each other from a distance! Safety first!

Diet pills from Sears catalog in the early 1900s.

The first pill was a tapeworm egg.

The second pill was a drug to kill the tapeworm. You’d take it when you reached your desired weight.

A boating raft that flies behind the boat (think 20’ in the air). The year I bought a boat they were the newest thing with a big video in the store on a big screen tv. I wanted one, but my wife said “hell no!” Our kids were about 8 and 11 at the time. The next spring I went in and they were nowhere to be found and I asked the salesperson about them. She said they were recalled due to injuries. What a shock! (They still looked fun as hell)

Anyone remember those twist-braid machines for kids? You’d stick two strands of hair, stick one in each prong, and press the button. It’d twist the individual strands, then twist them together, and you’d use those bead-clips to hold the “braid” together. Friends and I lost a lot of hair in those days…

There was a water gun toy that was voice activated. You would say “fire!” like you’re shooting a gun and then it would shoot water. Queue a number of false fire alarms because kids are running around screaming “FIRE FIRE FIRE FIRE FIRE” at the top of their lungs.

We had a 4 Loko night when it first came out. It was the most drama filled party I had in college. I think we would have been better off just doing a bunch of bath salts.

I remember when you could buy that weird “synthetic marijuana” stuff in gas stations, it was right by the register. Apparently that stuff is crazy bad for you, and basically turns you into a zombie.